Here we are, at Grecliff, or the place where the birds are sleeping. 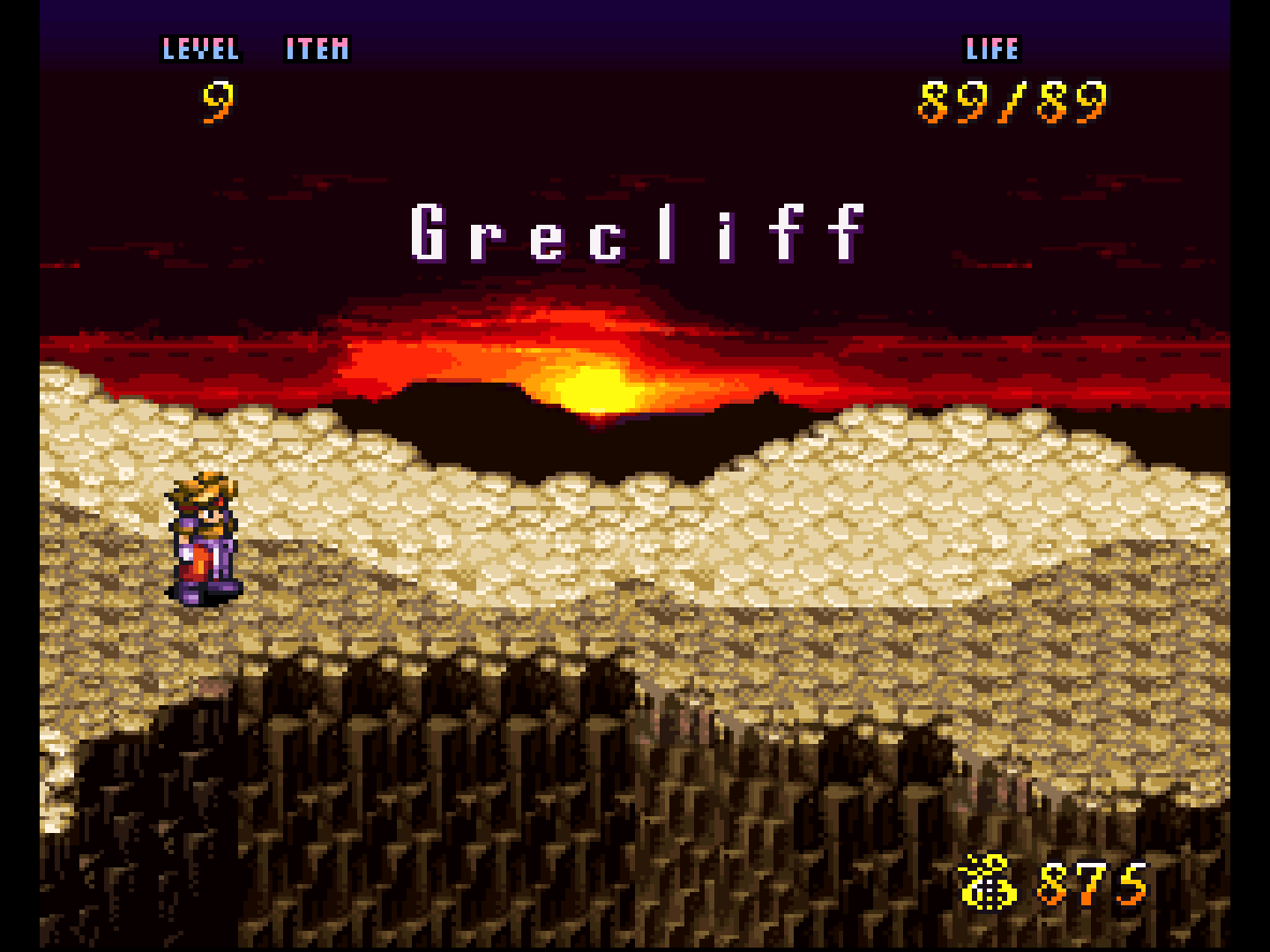 The red landscape looks ominous, but it looks so nice. 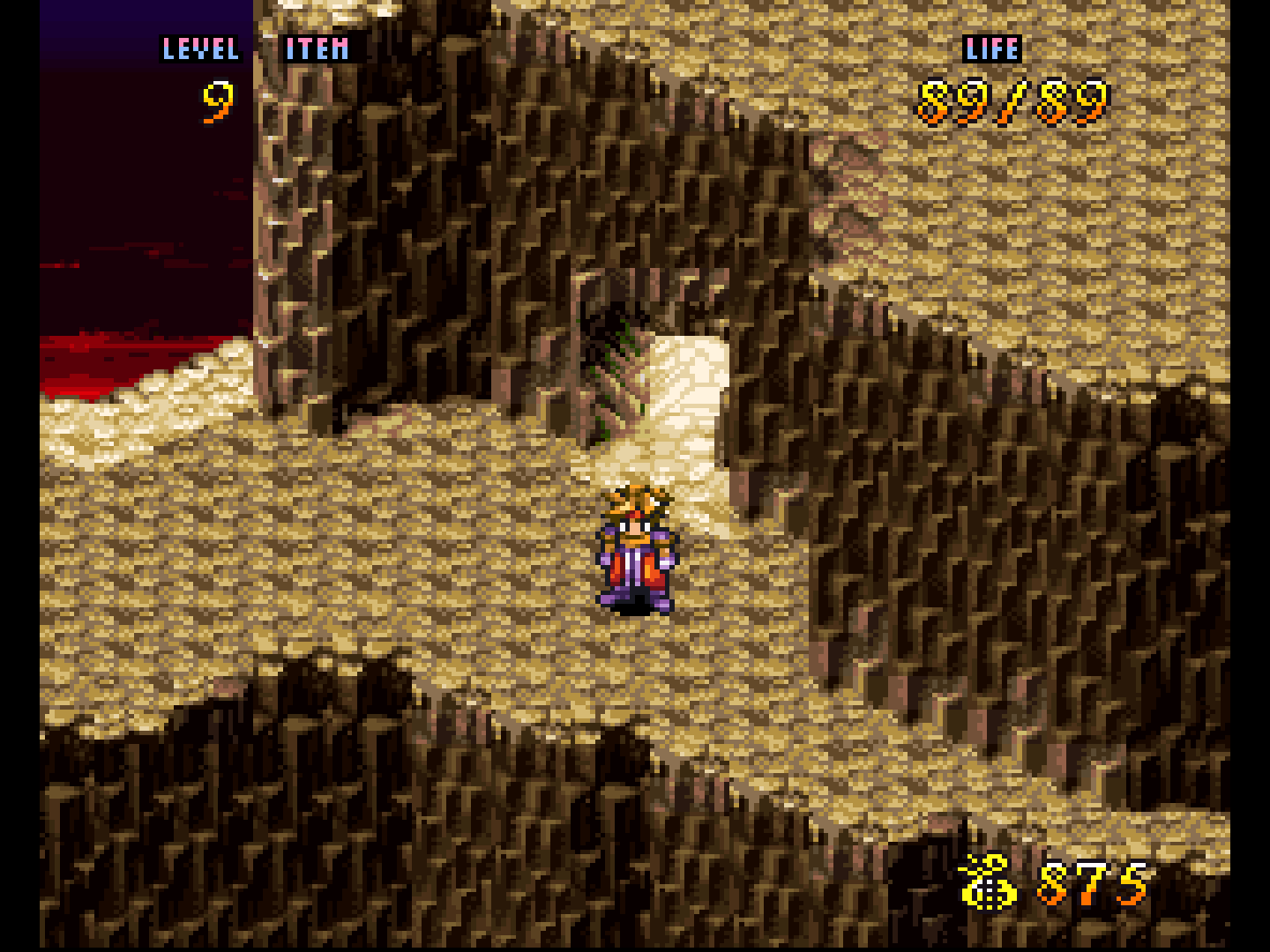 Inside the cave now, where we see a stone creature walking around at the north end.

The creature's a hard hitter, and hard to hit!

I have Ark use a repeated rush at the stone being.

I take caution after awhile, and proceed to take care of them slowly.

Eastward, another stone creature and a swooping bird strike!

I have Ark jump the short cliffs, and head upstairs...

Looking at the map, it seems we have a long way to go...there's two cliffs here. 5 floors on the first cliff, and 2 floors on the second.

I pass by another stone creature, and have Ark push a boulder to get thru. Near the second boulder, we pick up some small boulders and throw them at the creature.

After they're gone, I have Ark push the second boulder, which turns out to have another stone creature hiding in there! Oh my goodness, game... 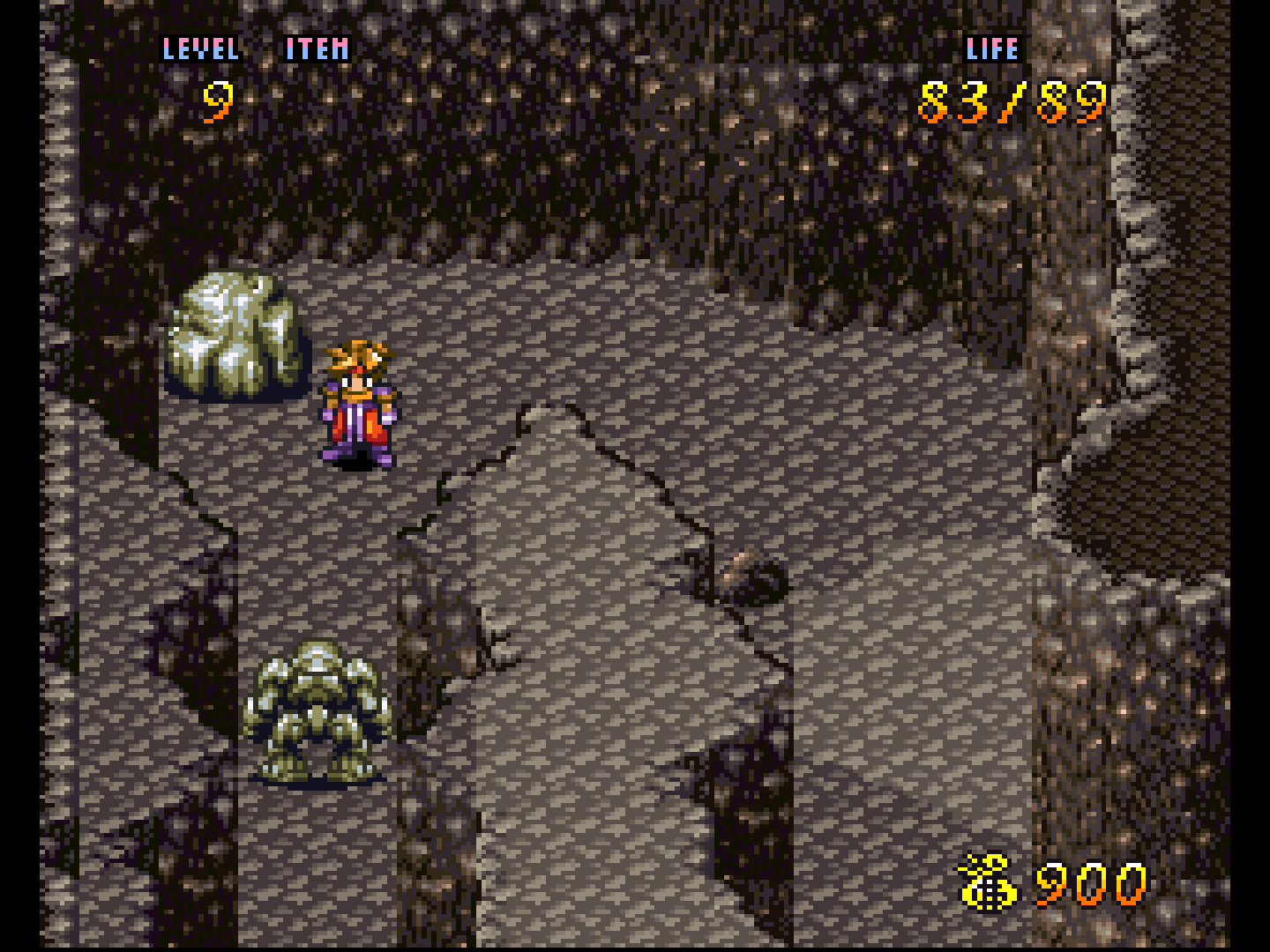 There's also a mudman here too, and the mud that he slings is like quicksand. Ark's staff or magic have no effect on him...

I go to the next tunnel in the cliff, and pass the stone creatures.

The birds here are slightly tough to take out, since they keep flying over Ark, and move out of range.

Higher up, we go inside and get another boost potion! 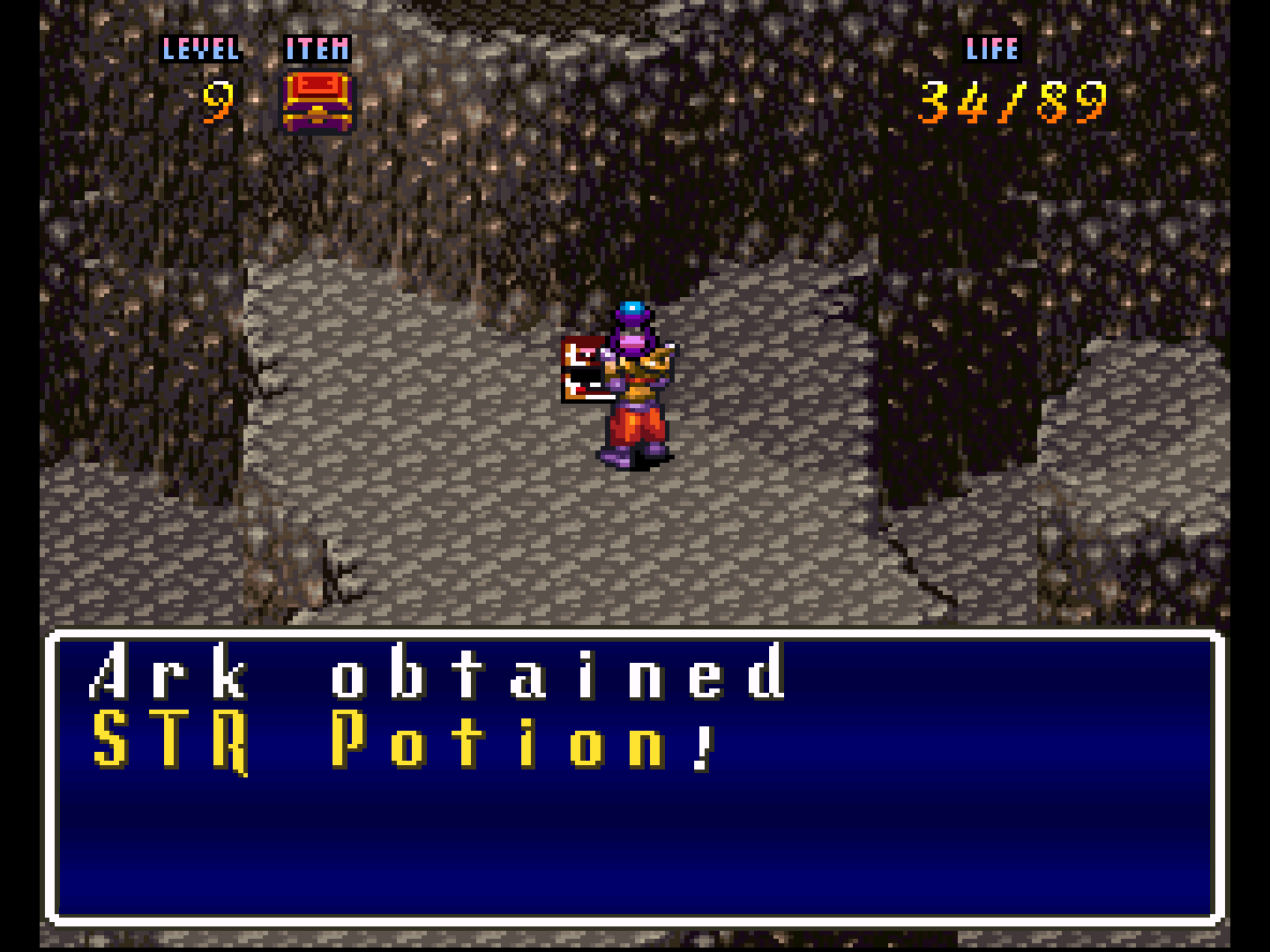 Back at the cavern river full of birds, we climb to the next floor in the cliff...

Past the entrance, we're treated to another surprise! 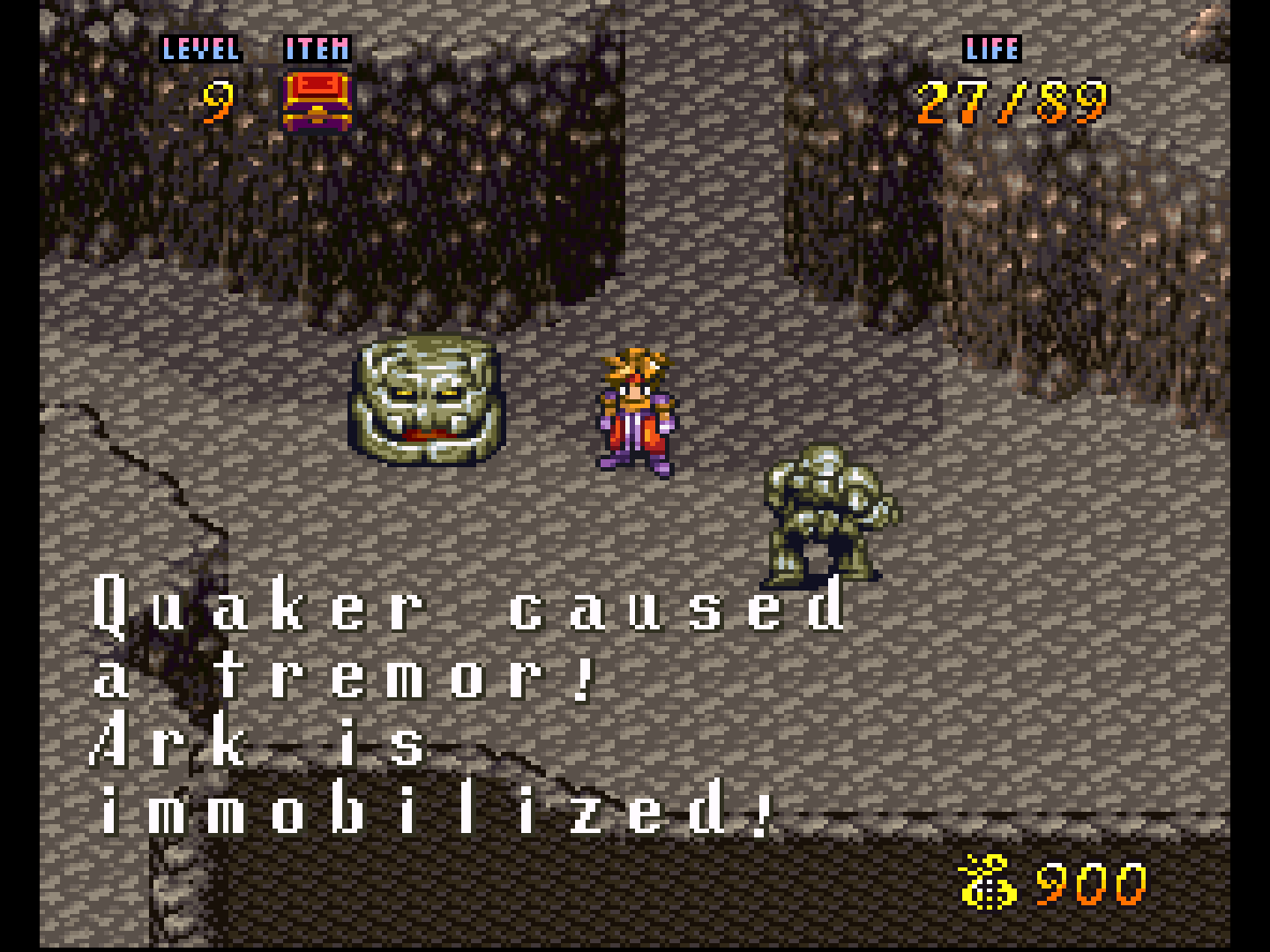 The Quaker jumps again, freezing Ark because of the shockwave from his jump!

We climb two sets of stairs, and circle around the area until we make it back outside the cliff...

We climb more vines and pass another invincible mudman before going back in. Are mudmen really indestructible in this game?

Two stone creatures get the drop on us, and we pass through them (taking lots of injuries) in order to get what's in the chest. 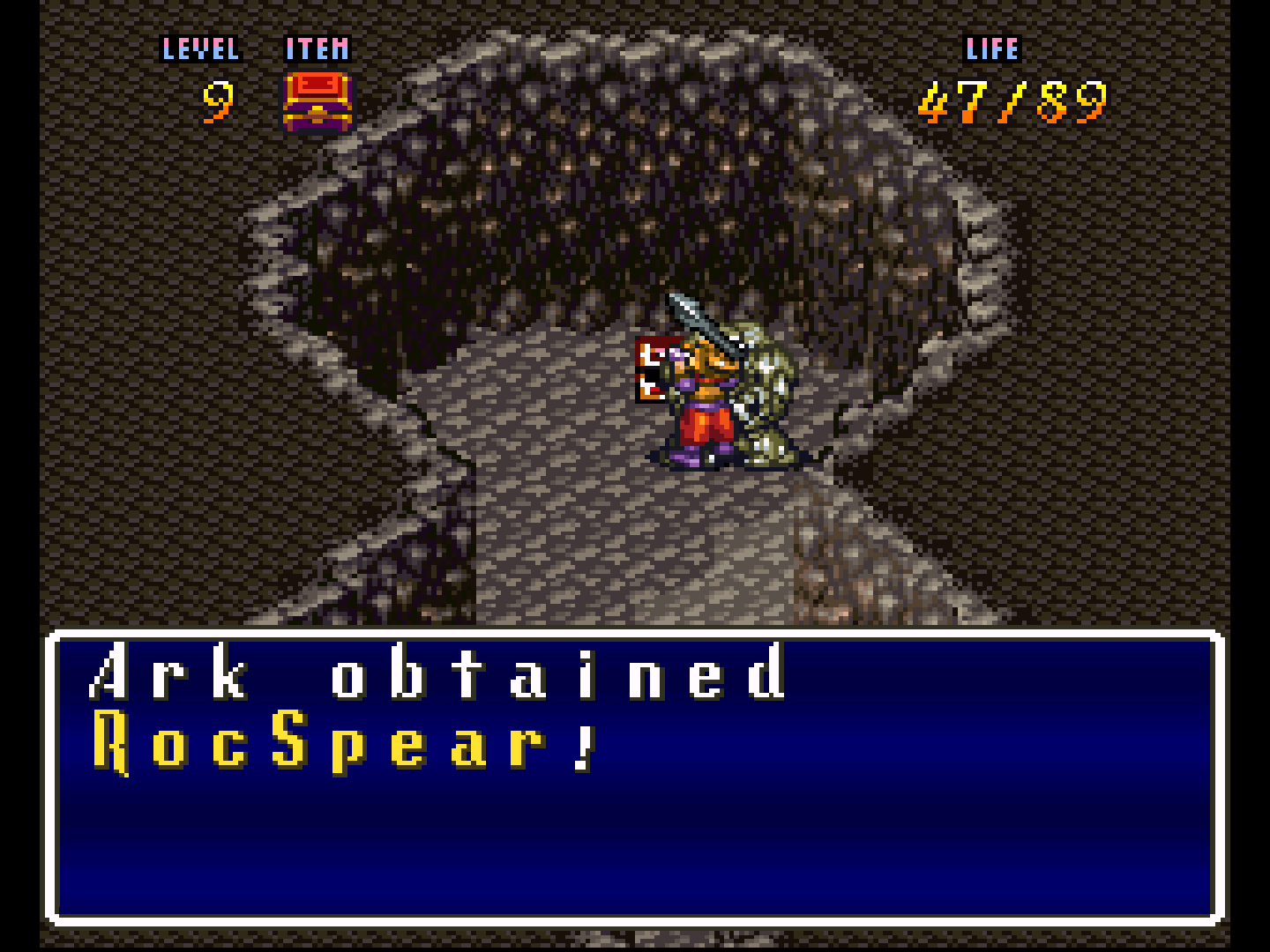 Let's hope this weapon will make things a bit easier around here... 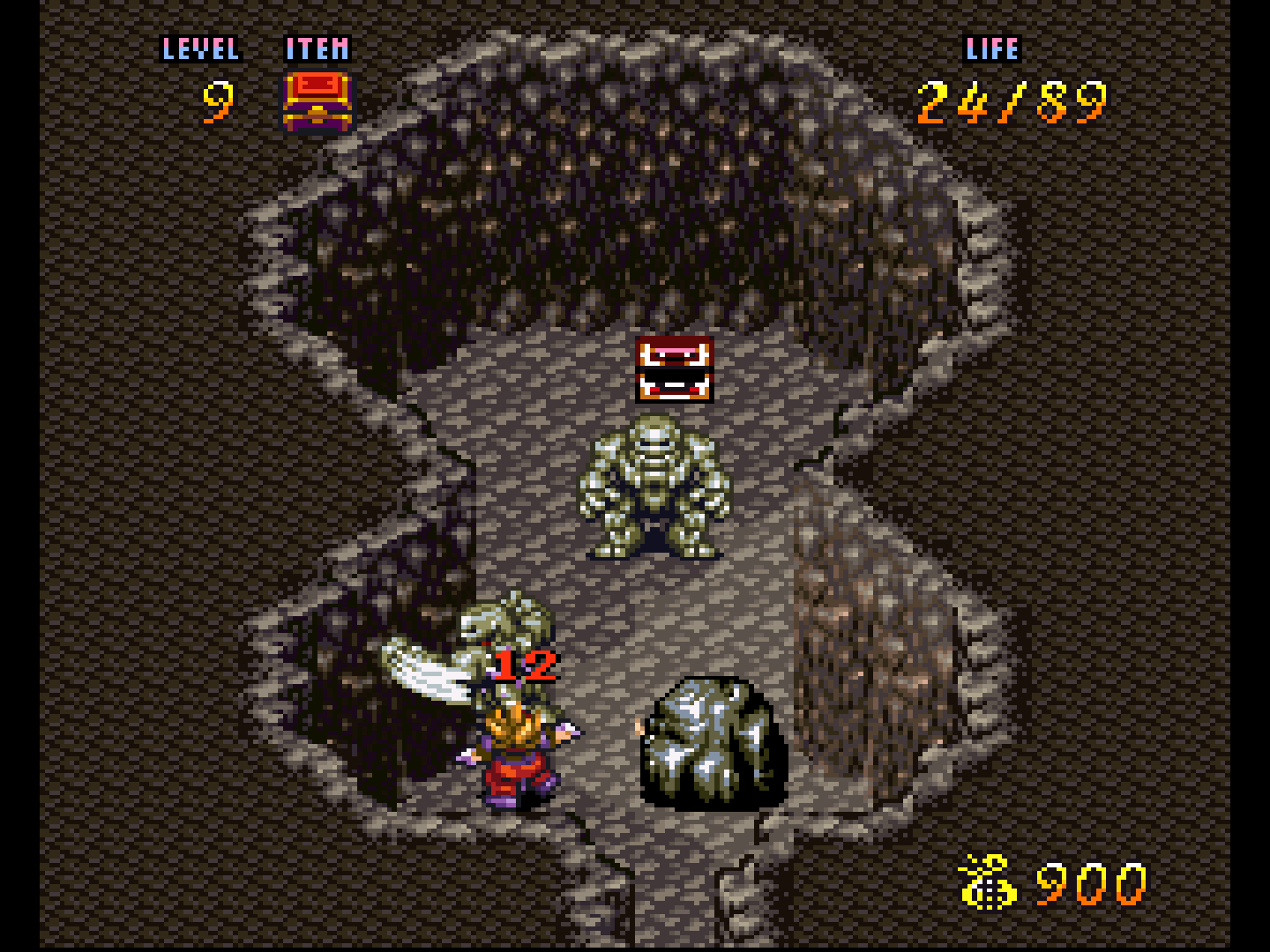 ...and a boulder falls, blocking our exit!

I equip the Rock Spear and shatter the large boulder, along with the two rock creatures!

I noticed a bunch of holes and reliefs on some of the faces of the cliff... 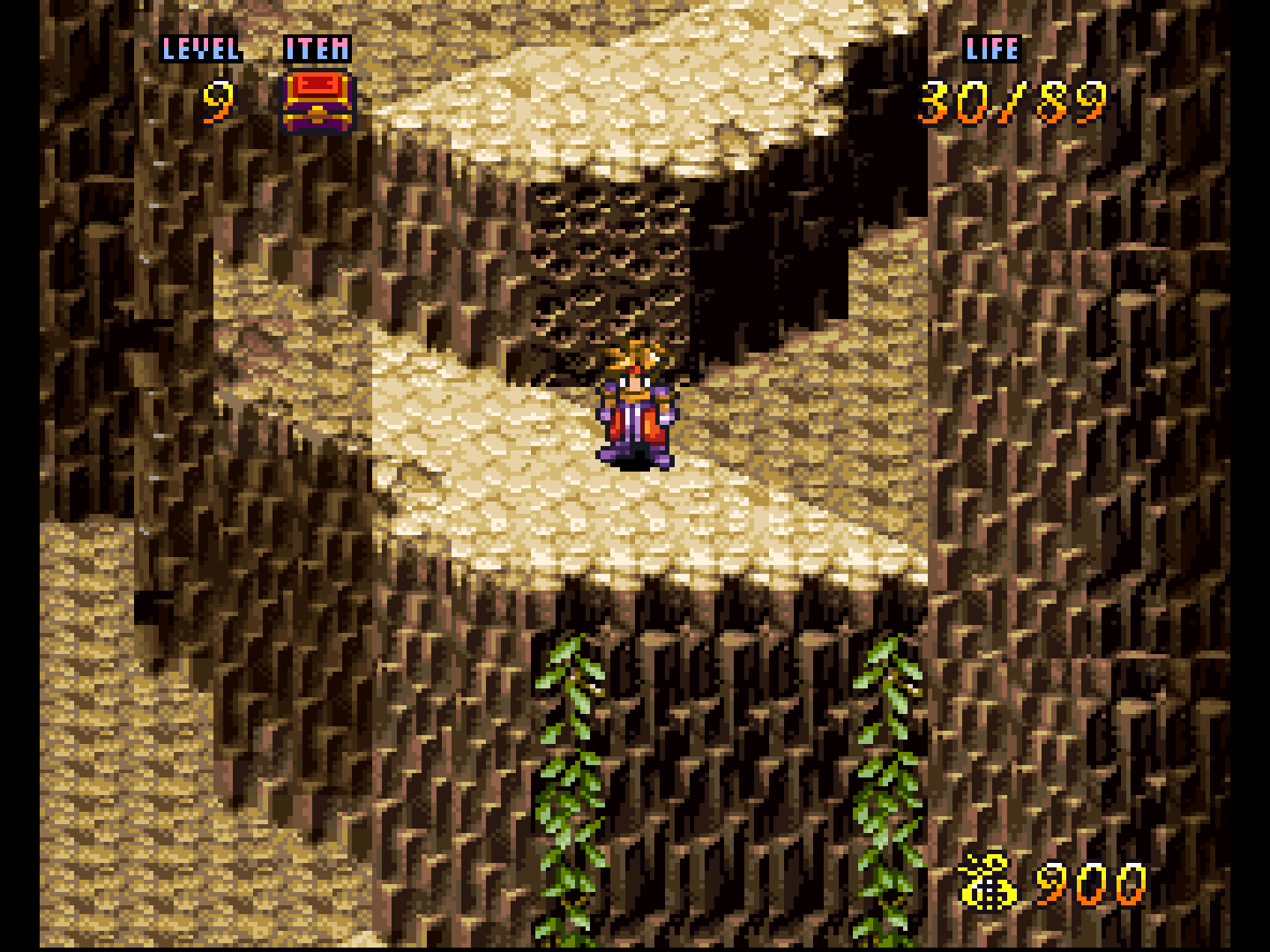 I think we might need something to climb that rock face.

West of where we came from has those same holes.

We go back and climb more stairs, where Ark levels up after taking care of another swooper! 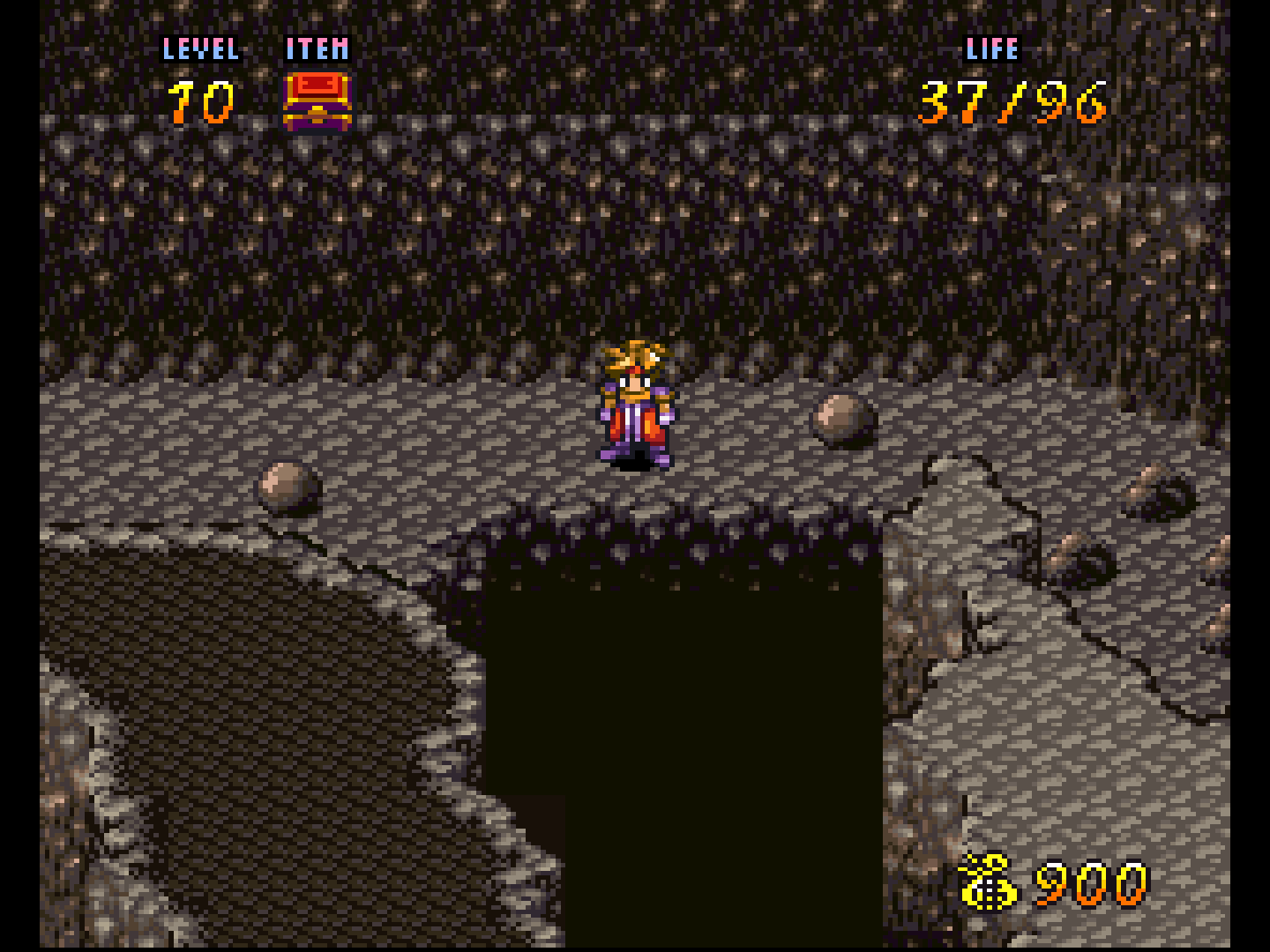 With nowhere to go, we turn back. The enemies in this area are now more easier to take care of with this new spear.

Now how to reach that treasure chest in the corner? 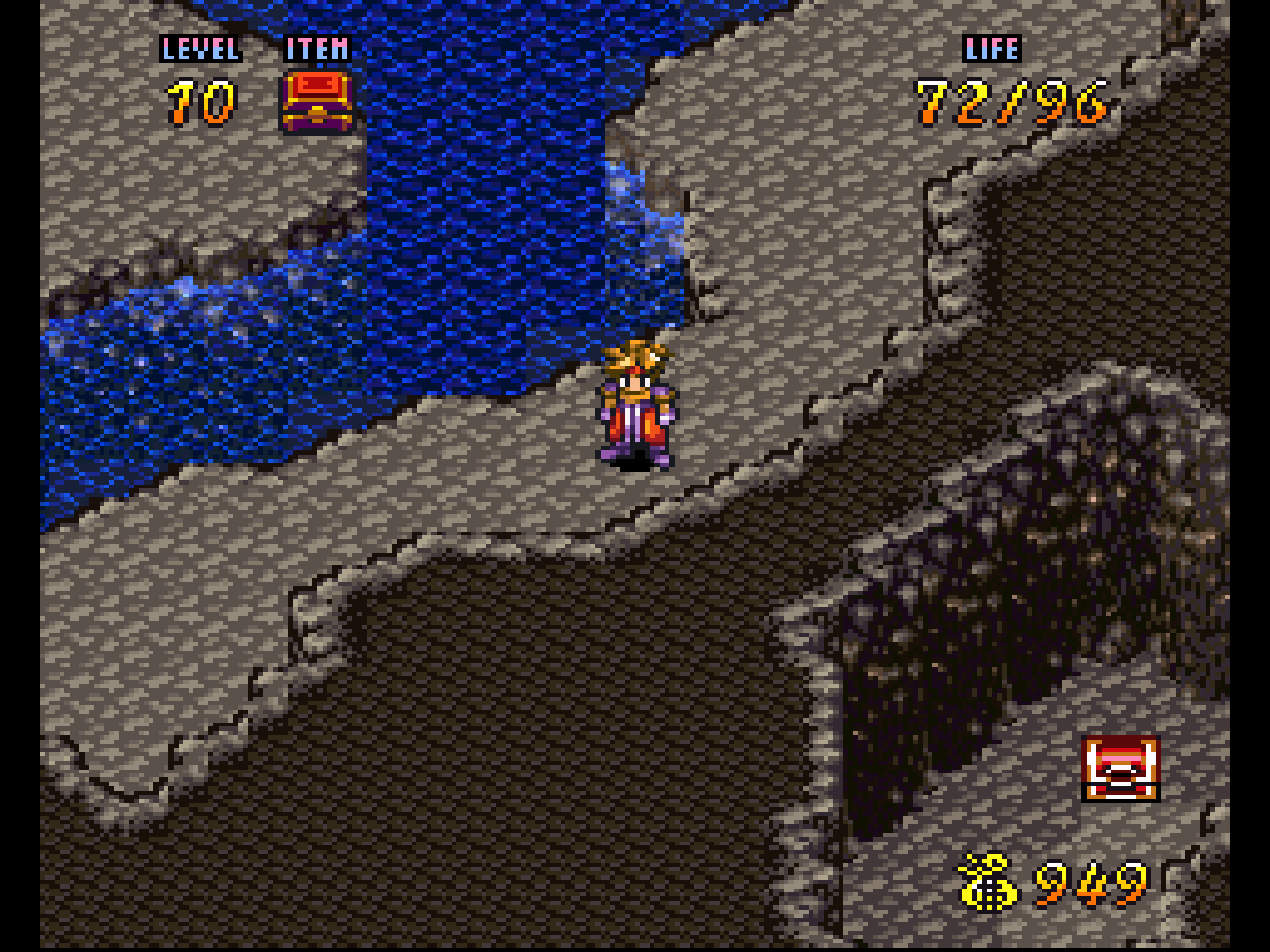 I take care of more stone creatures to relieve my frustrations of this mountain from earlier.

At least they drop a lot of money...

We return to the empty bird sanctuary, buy some more bulbs, and save at this point.