So the village I'm at is called Crysta... 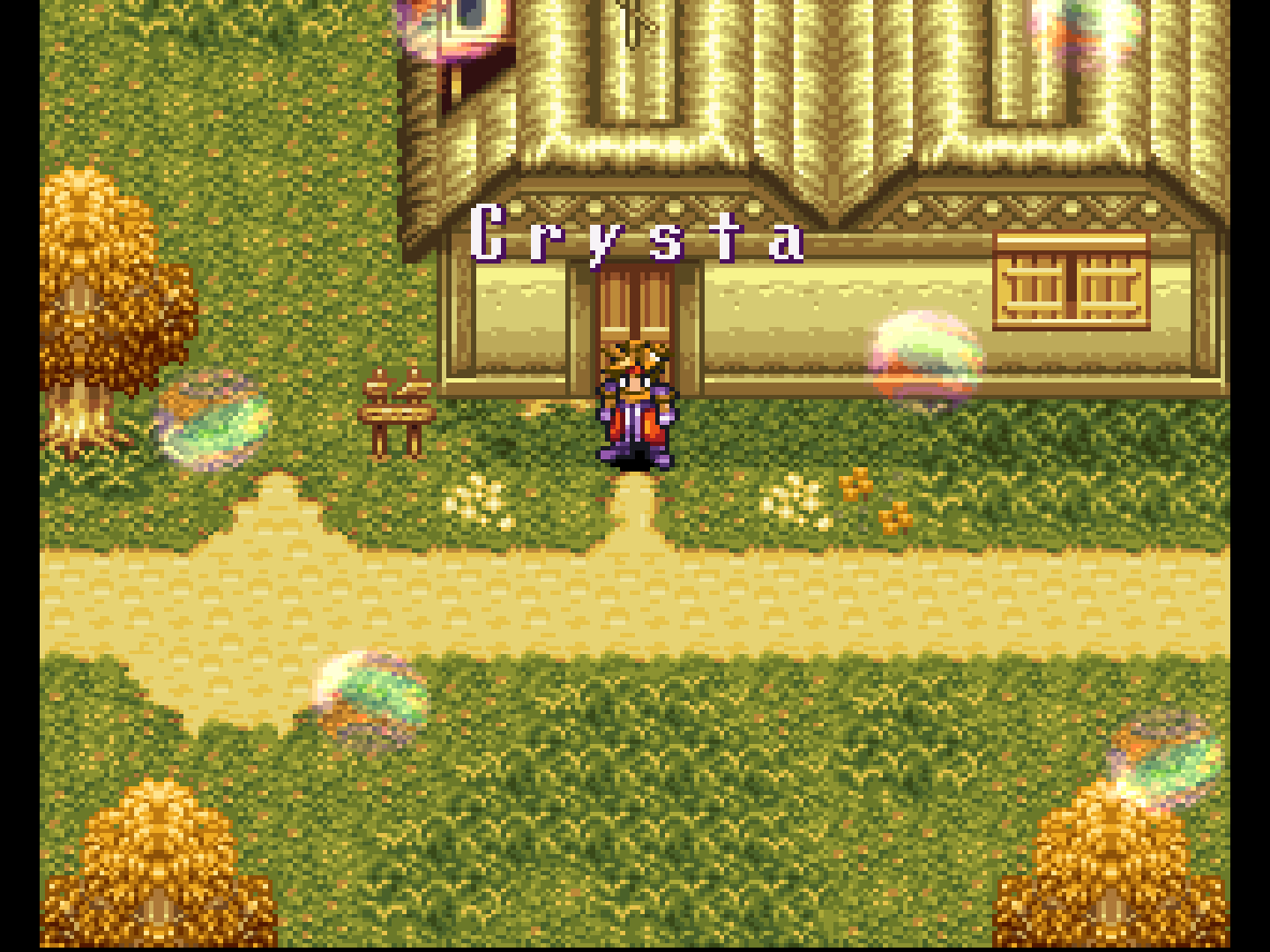 The landscape looks so beautiful. But are the bubbles supposed to be the crystal blue? 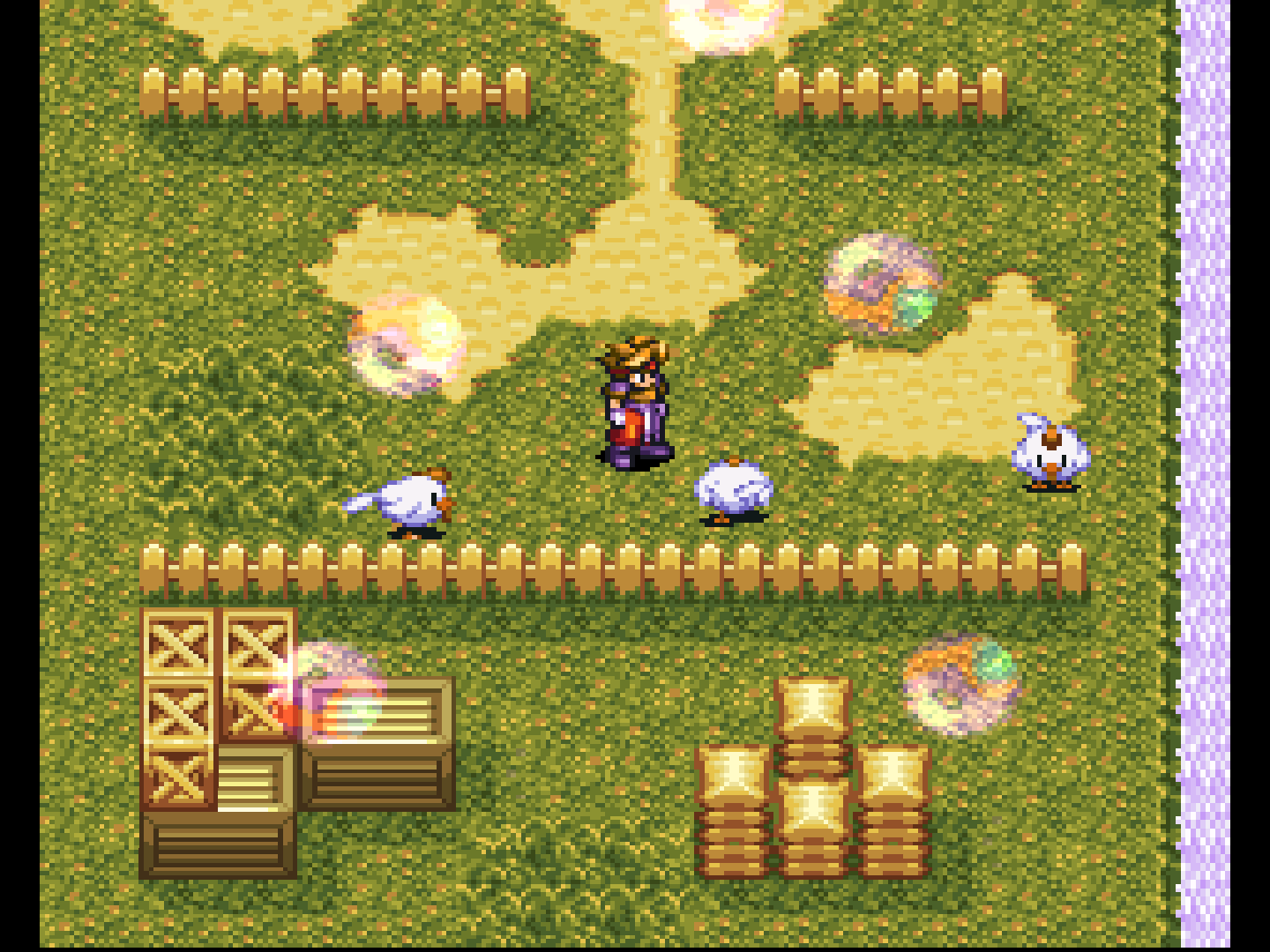 There are twin girls outside the weaver house, the girl on the right asks if Ark and Elle were friends from a past life.

A mustached man noticed a reflection of a different town in the water near him. 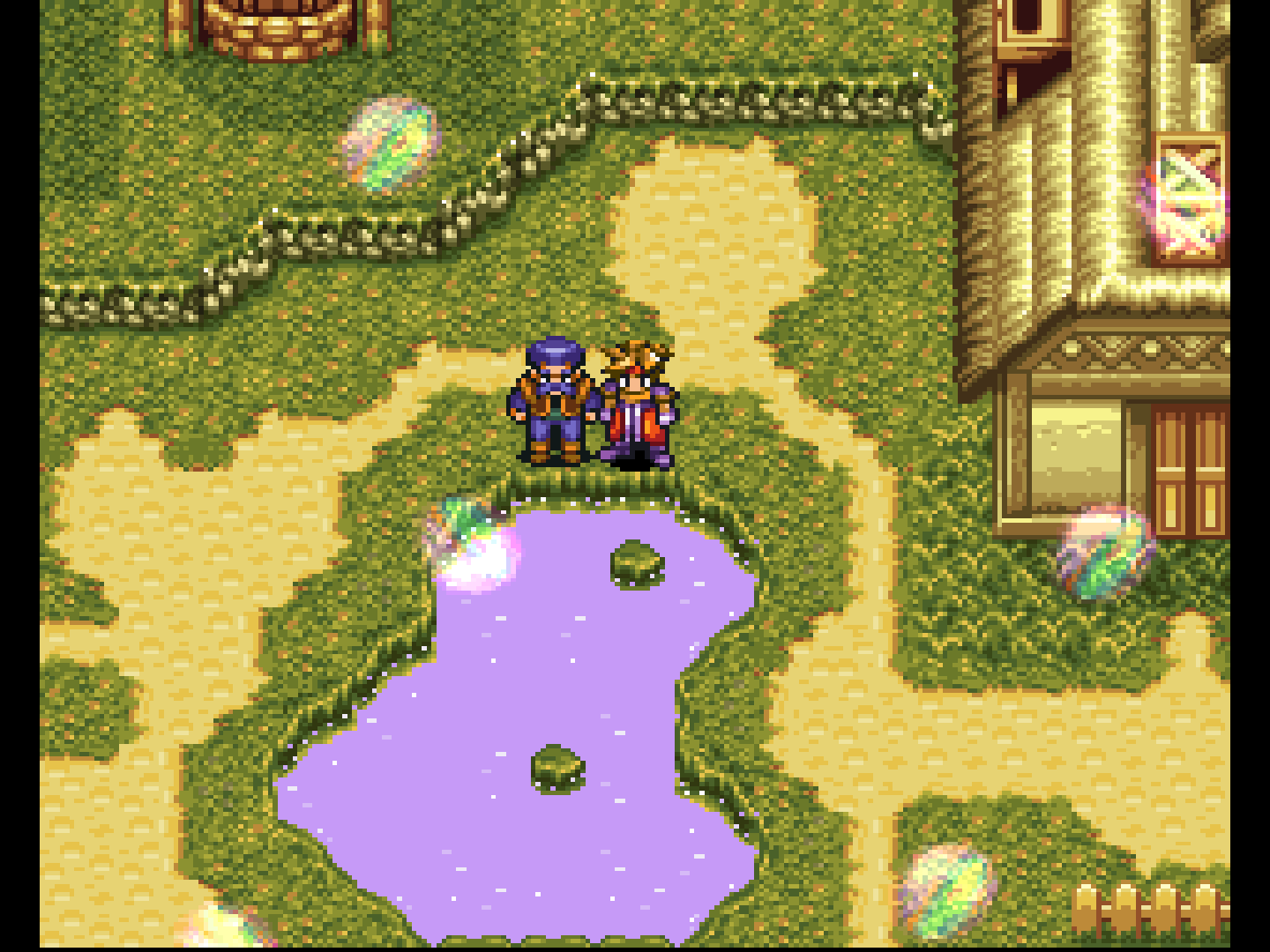 I can't jump past rivers, but I can jump up and down from small cliffs...

Near the shops here now. 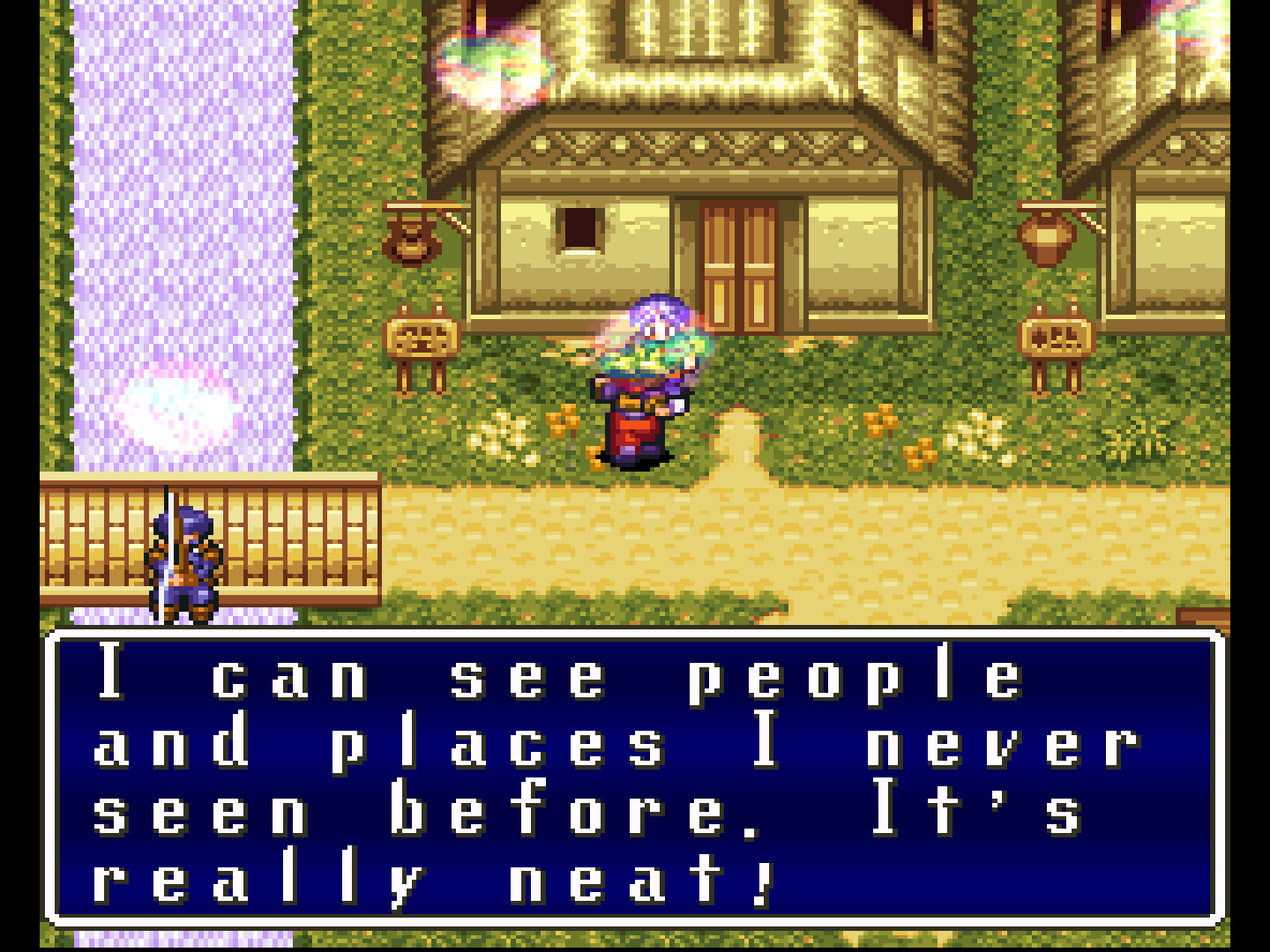 So the crystal blue shows reflections from other places?

Two kids are practicing jumping, one farmer is worried about his crops from the effects of crystal blue, and a fisherman on a bridge is having no luck getting his catch.

I realize I have to press A to open doors.

I have no money, but the wares are items, and a Hex Rod, and Leather Armor. They're hard to see... 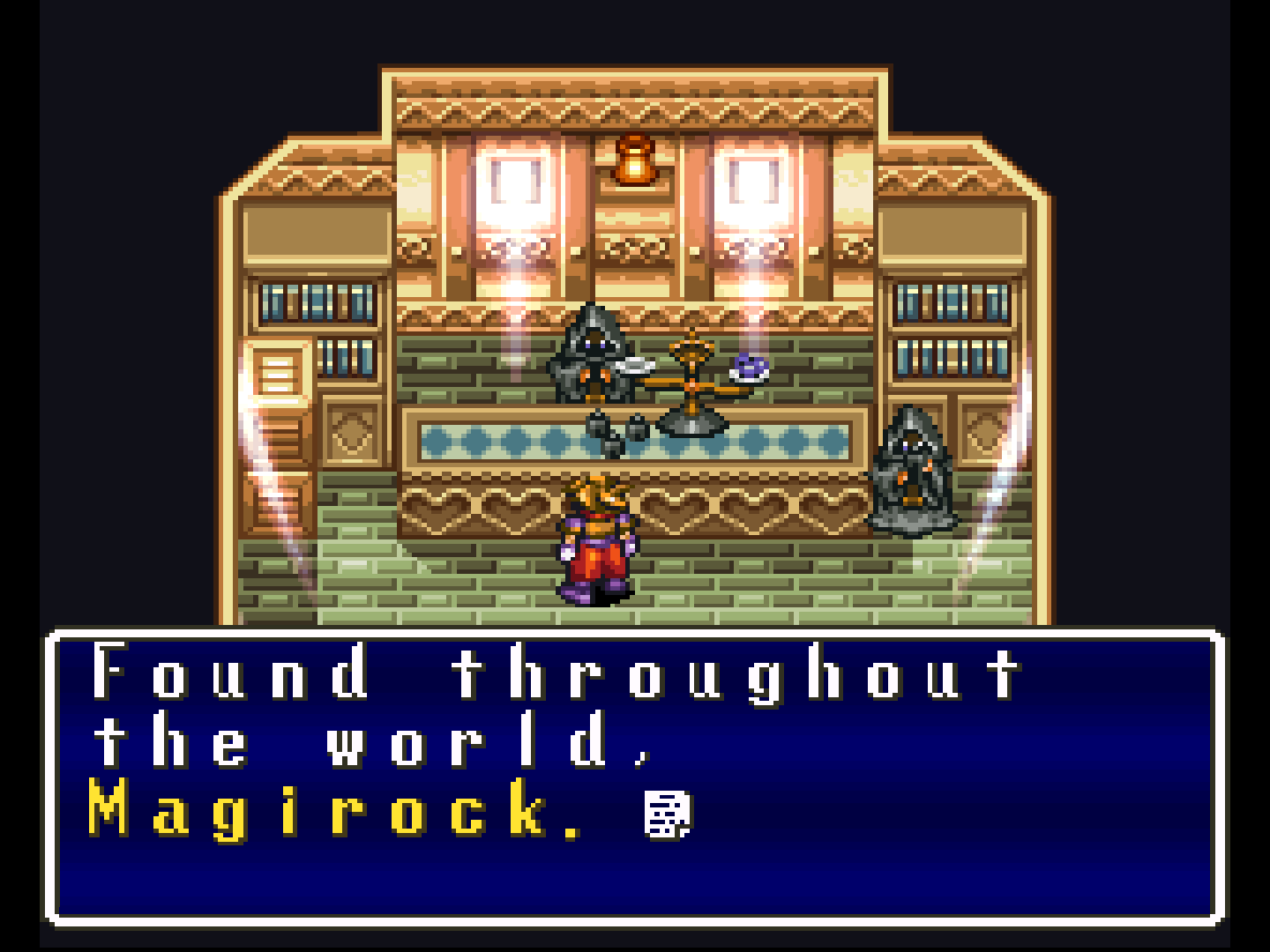 So if I bring some Magirock, the mage might give me a spell in return?

I get an explanation of Magirock from the mage at the side of the counter... 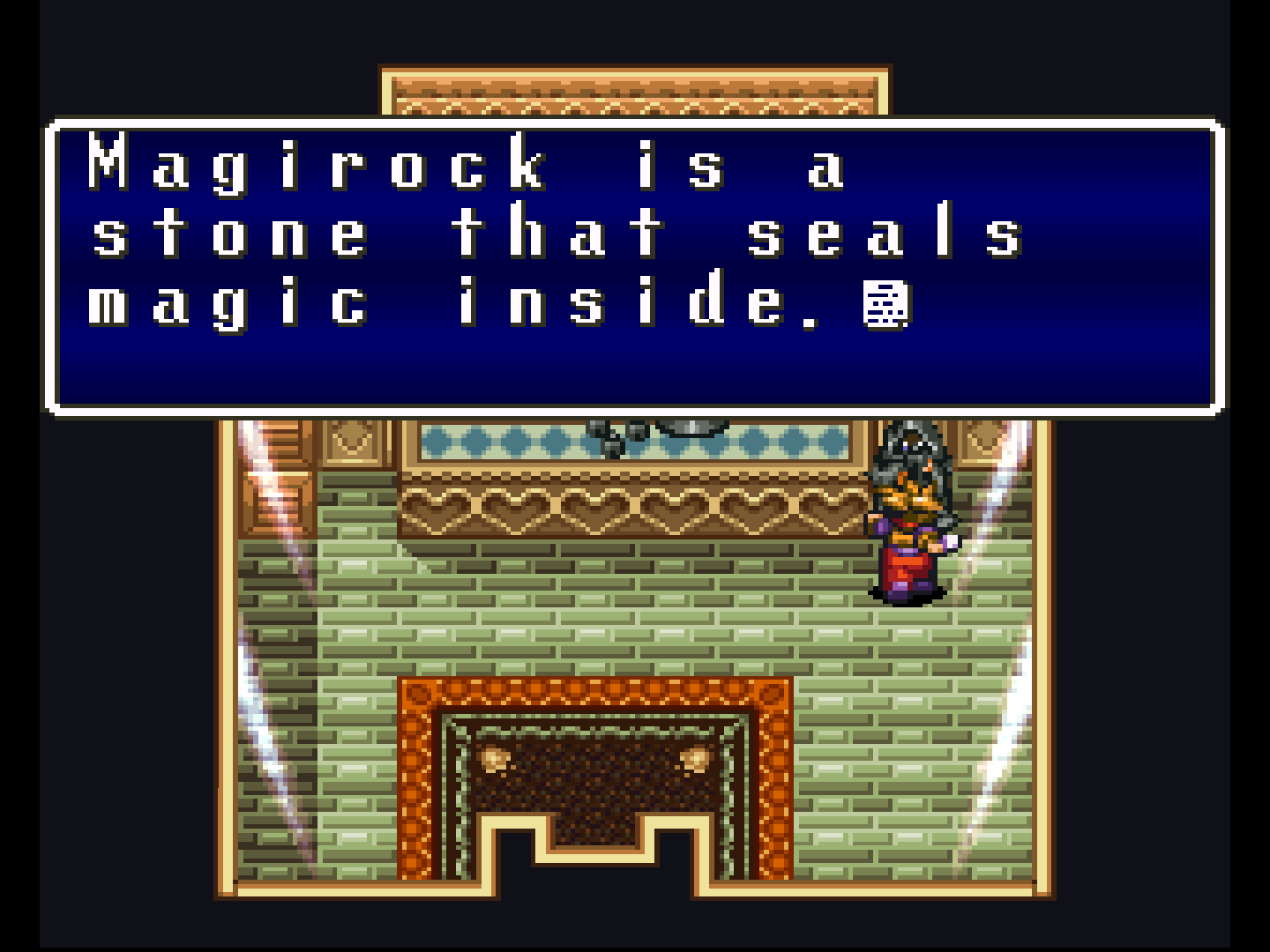 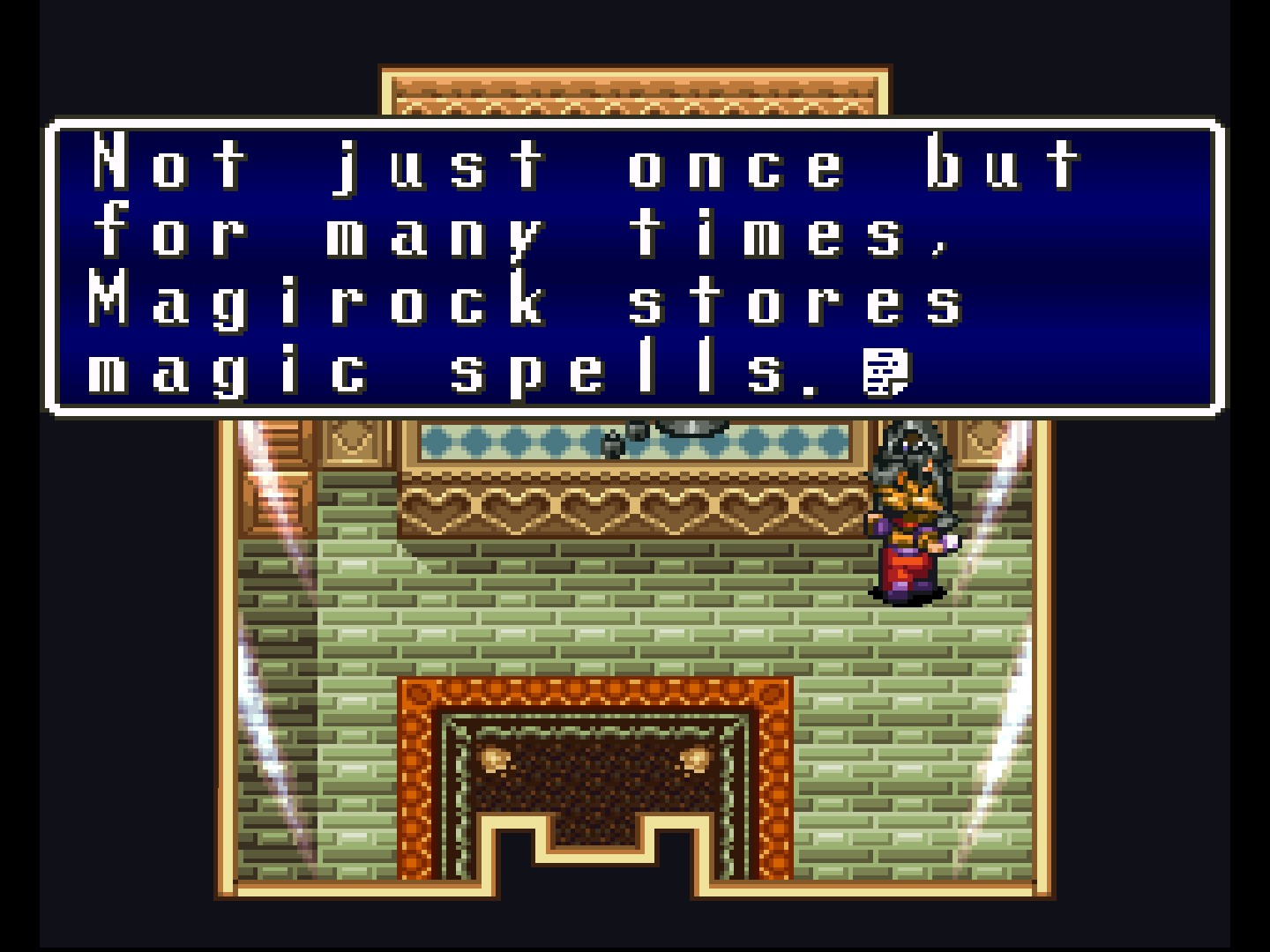 I go to the west, where I see a fortune teller. Her hand movement animations look so fluid... 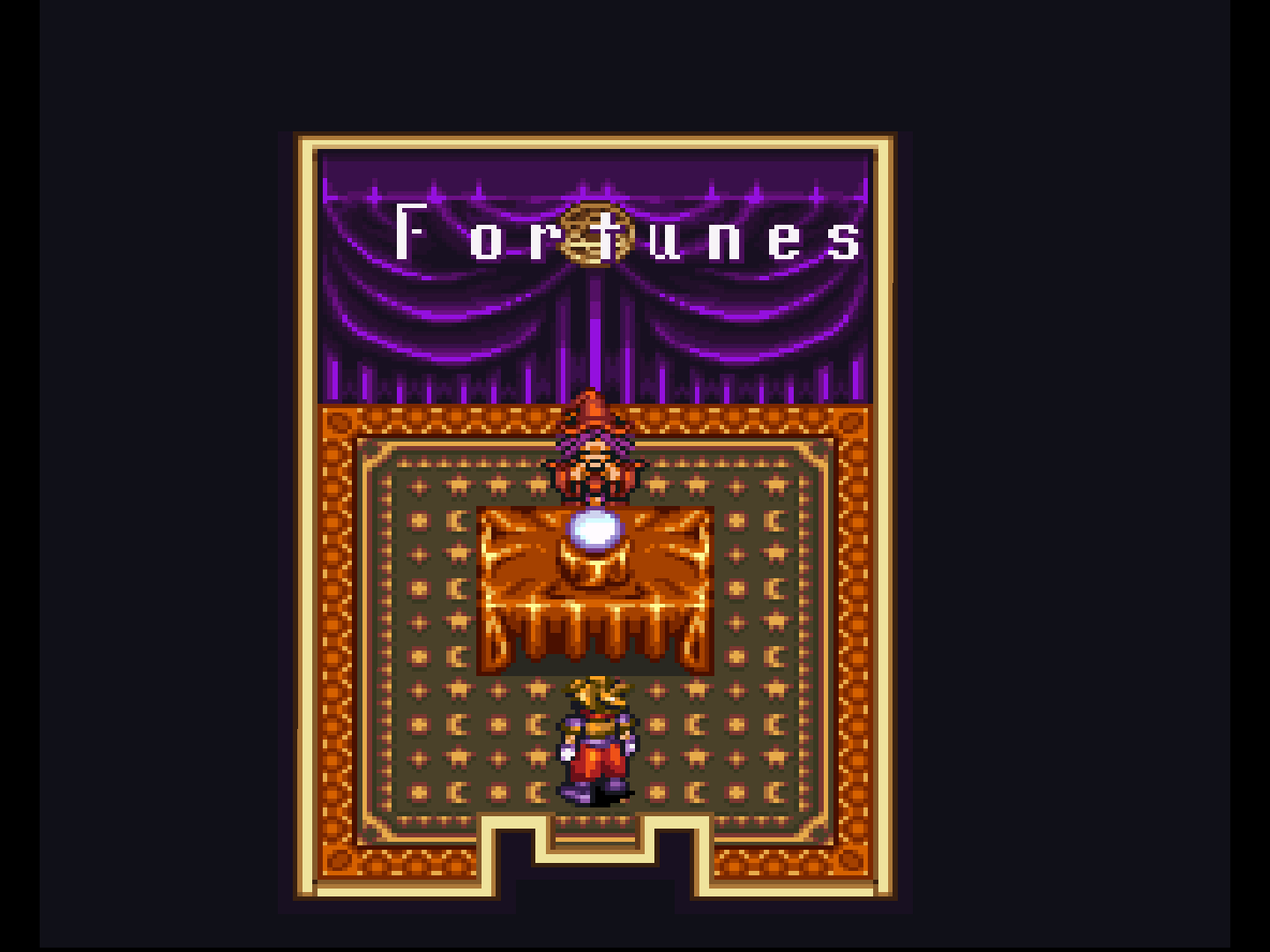 Inside the northwest house, a girl in bed has a bad dream. Is it the same one as Ark's? 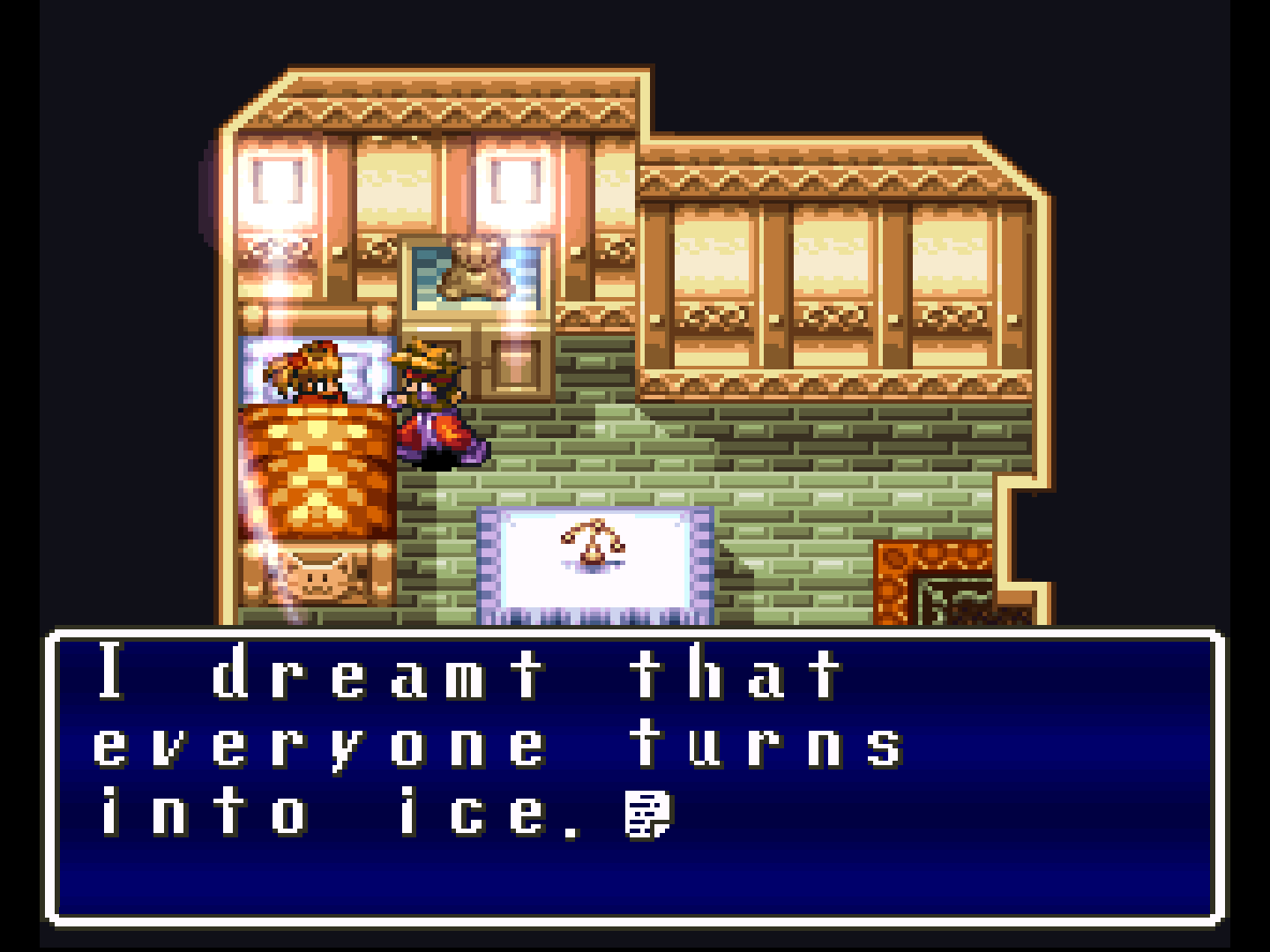 The northeast house is actually a flour mill. 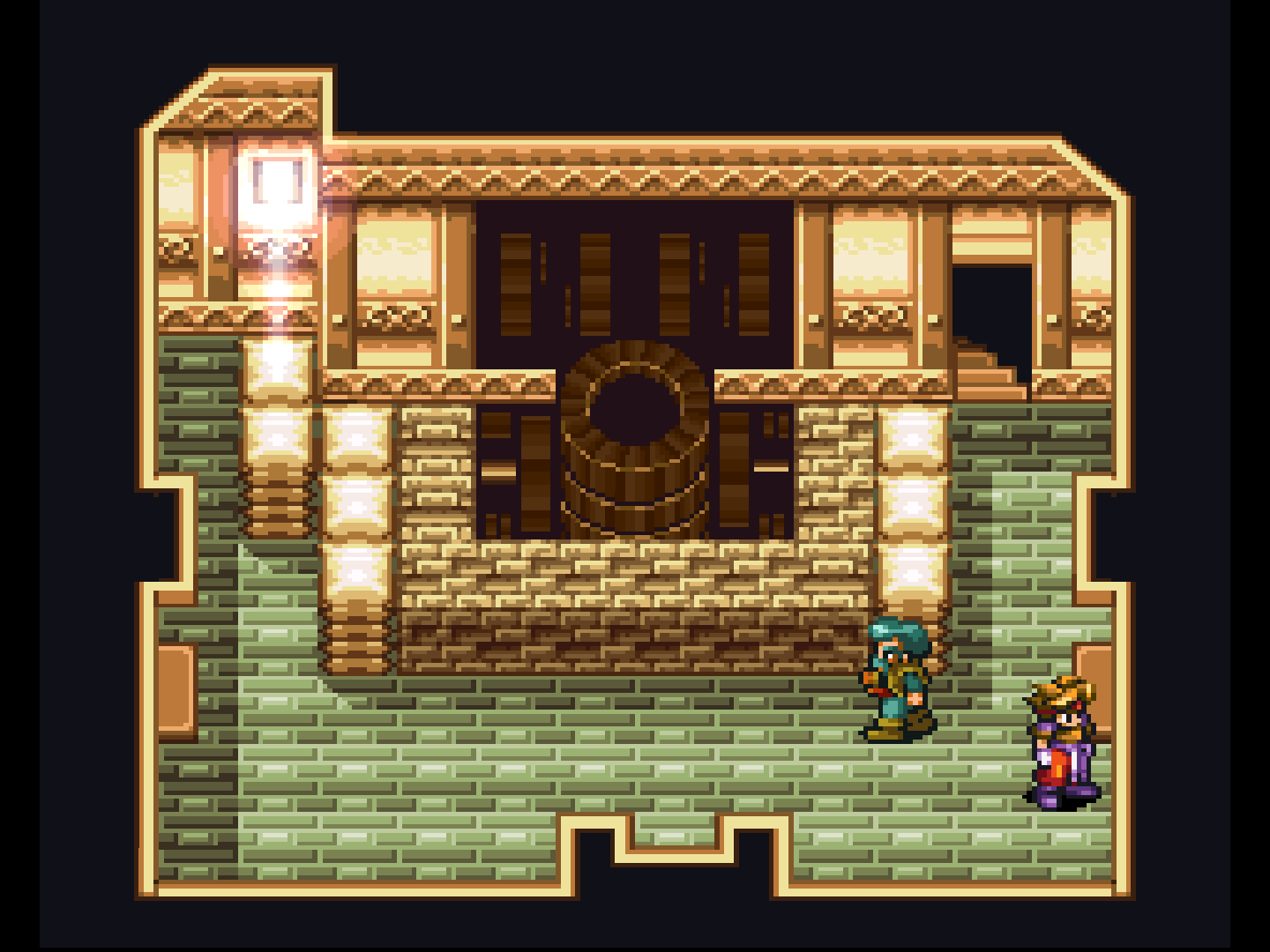 Upstairs, I see a switch behind vases and press it. It stops the mill. I press it again, restarting the mill.

A mill worker felt like he was working as a millhand for "a very long time," or maybe somewhere in the past?

Now inside the weaver's house... 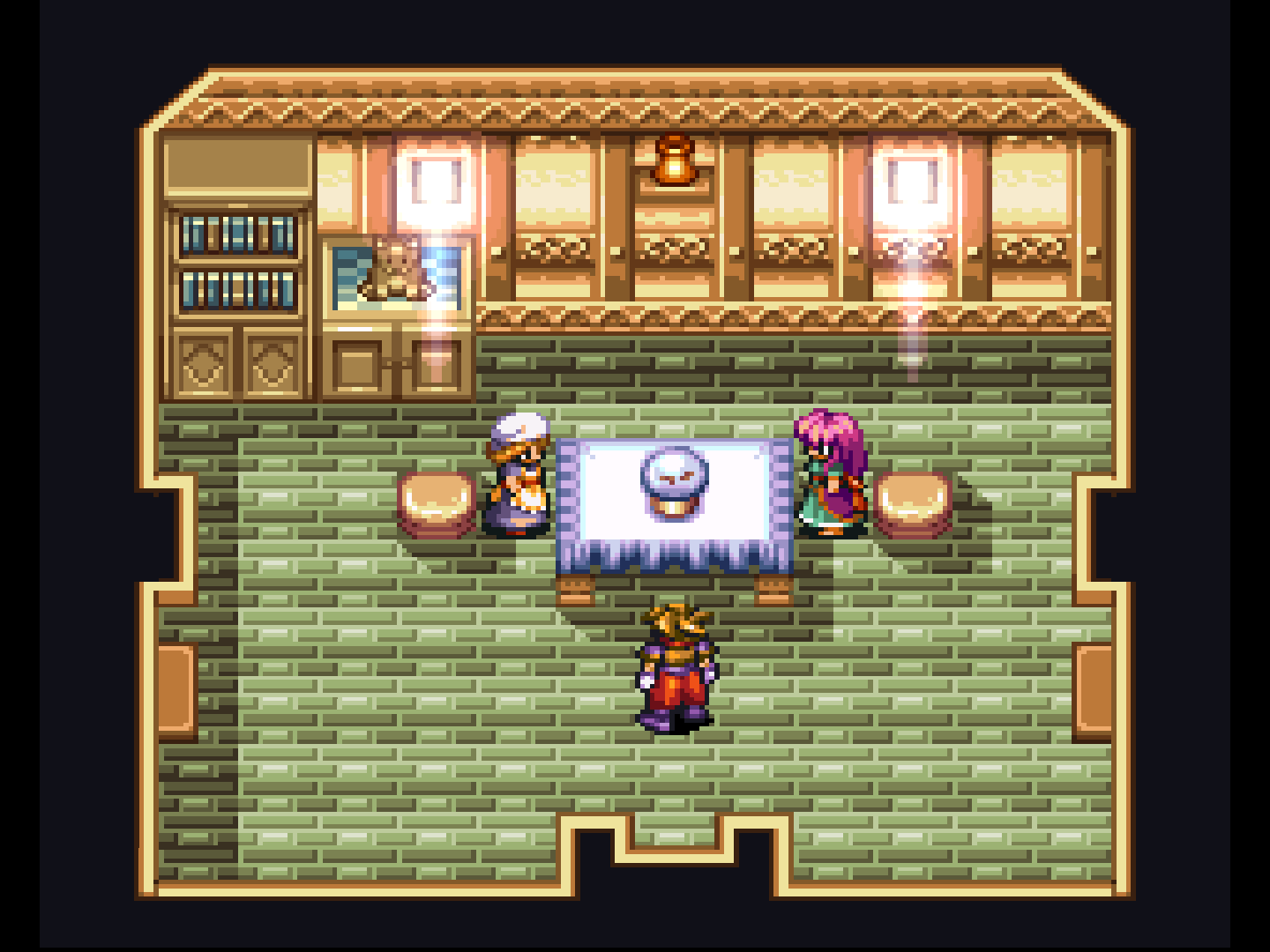 Elle tells Ark to apologize for the chicken incident.

I also learn that I can fall down from the roof...

I go back and have Ark talk to the madam weaver across Elle, who's probably Elle's mother. Ark starts to apologize.

Madam: "That is a surprise. You honestly apologized! If you understand, it's all right. We pour our souls into our weavings."

The madam is not a fan of Ark.

Talking to Elle now, who tells Ark to not cause any more trouble.

Back at the Elder's house, the men are trying to open the blue door. 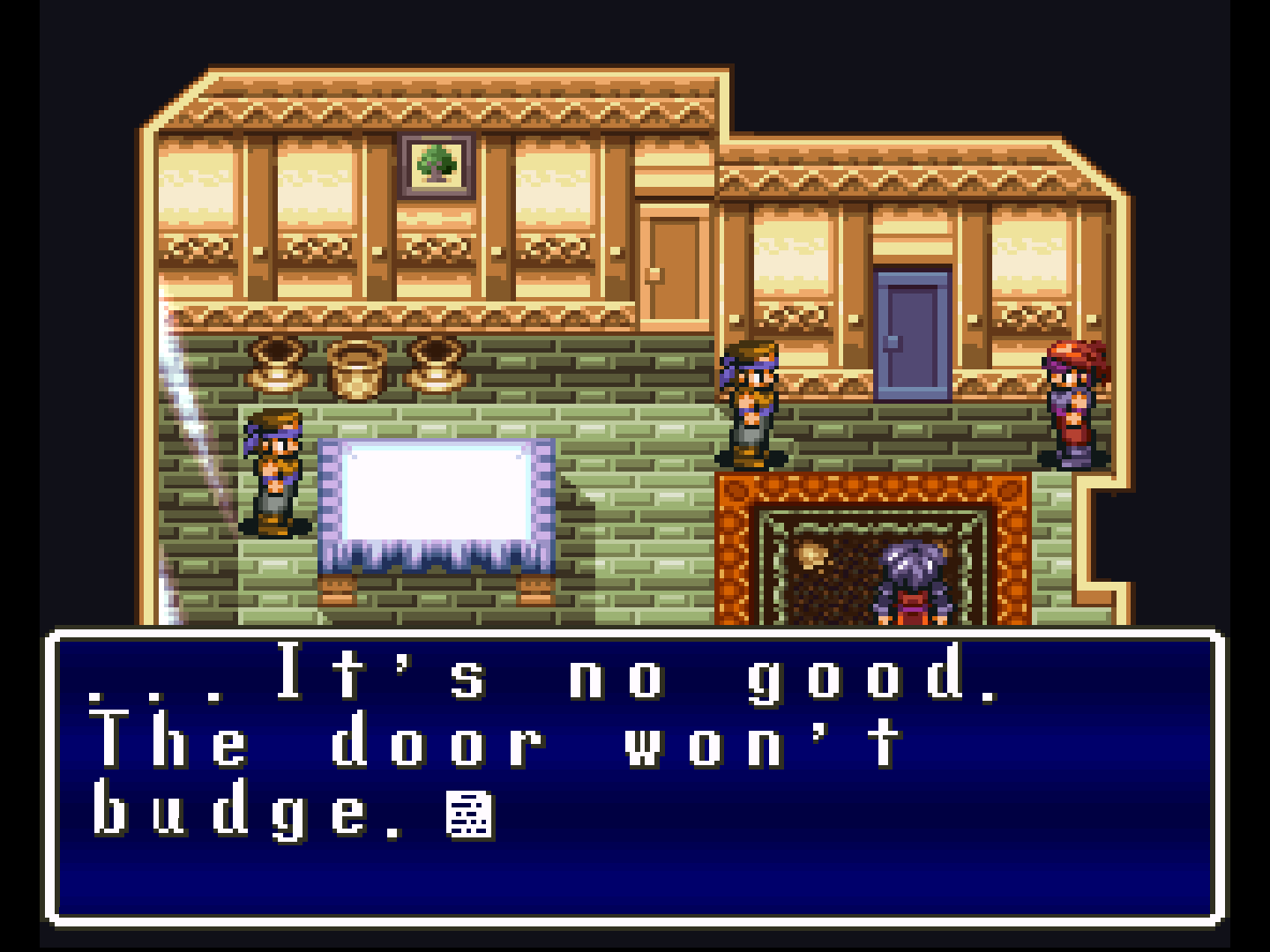 The Elder left, and now the guys want me to open the sealed door.

I have Ark refuse twice. 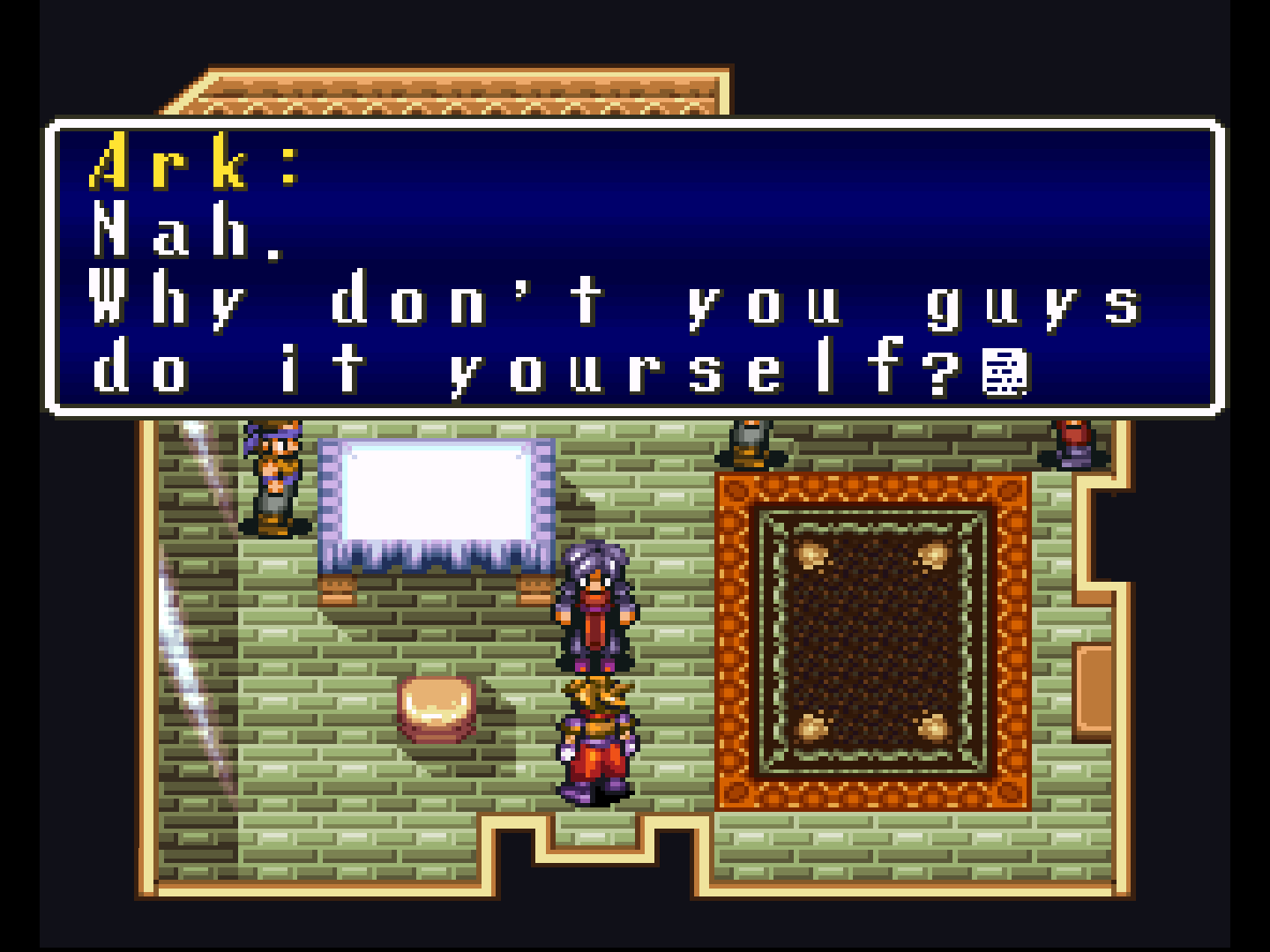 They're like, "Yeah, okay." But they won't give me any prizes if they find anything in there.

Ark shrugs and has them open that door... 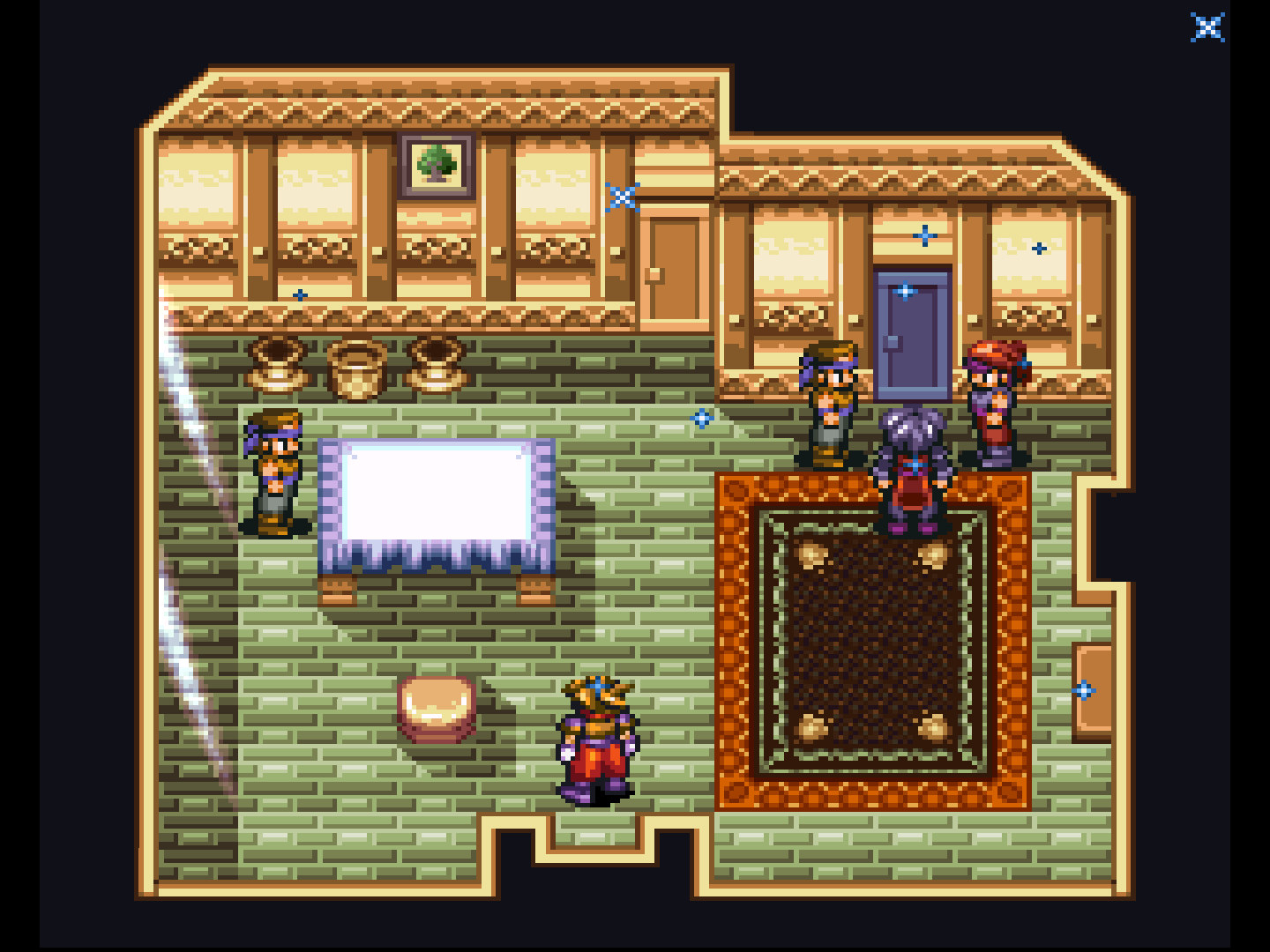 A bright flash of light, and they're gone! Ark's unconscious!

The remaining man wakes up Ark! 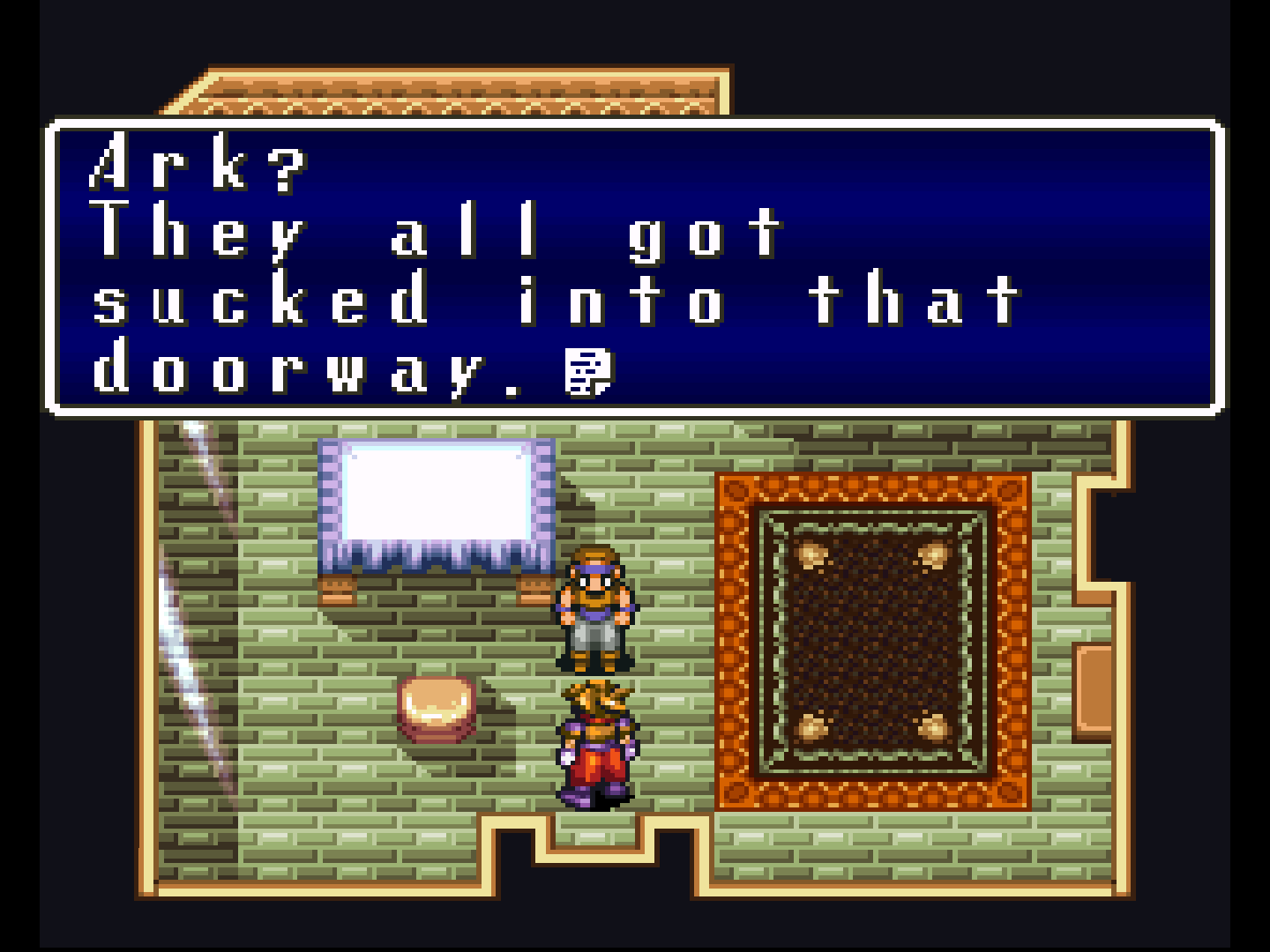 Lucky I was smart enough not to help open that door...

I go to Elle's place, who's about to start her work. 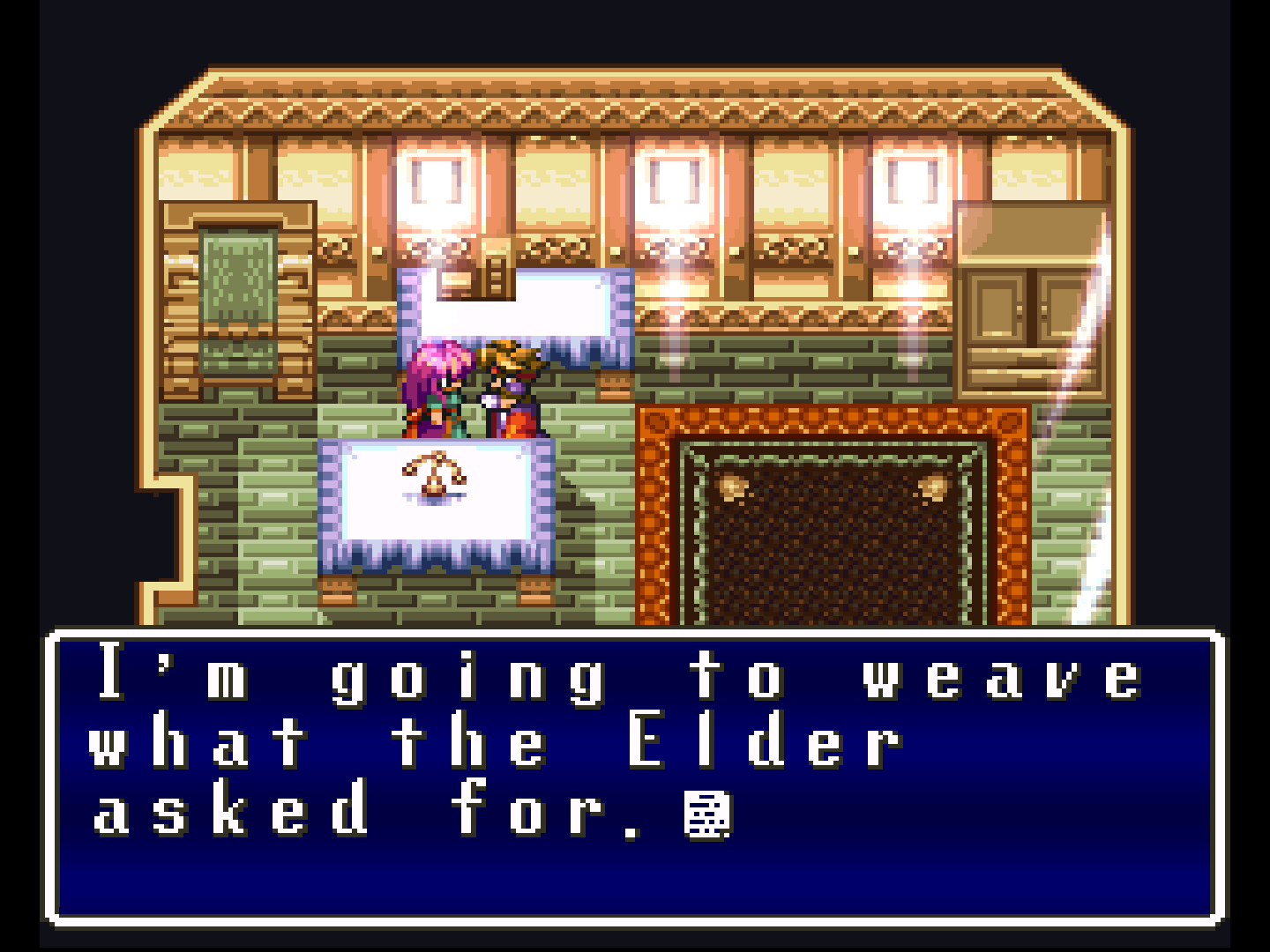 Elle: "But he won't tell me for what it's to be used." Keeping secrets, huh?

Elle says that the material is "'for a time that shall come.'"

After wandering round a bit, I head back to bed. 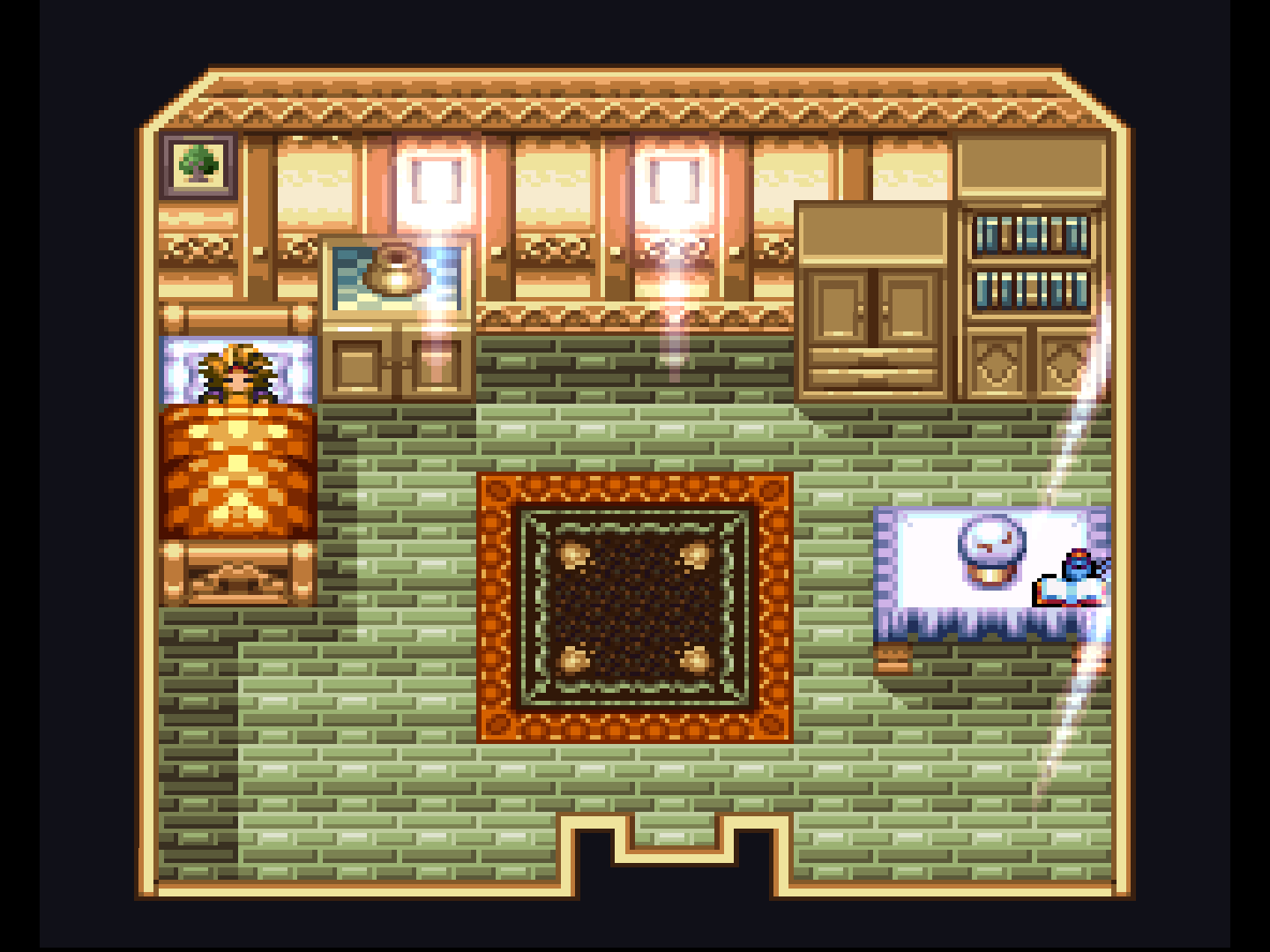 Nothing happened. More walking about...

Out of options, I have Ark throw a vase at the door. 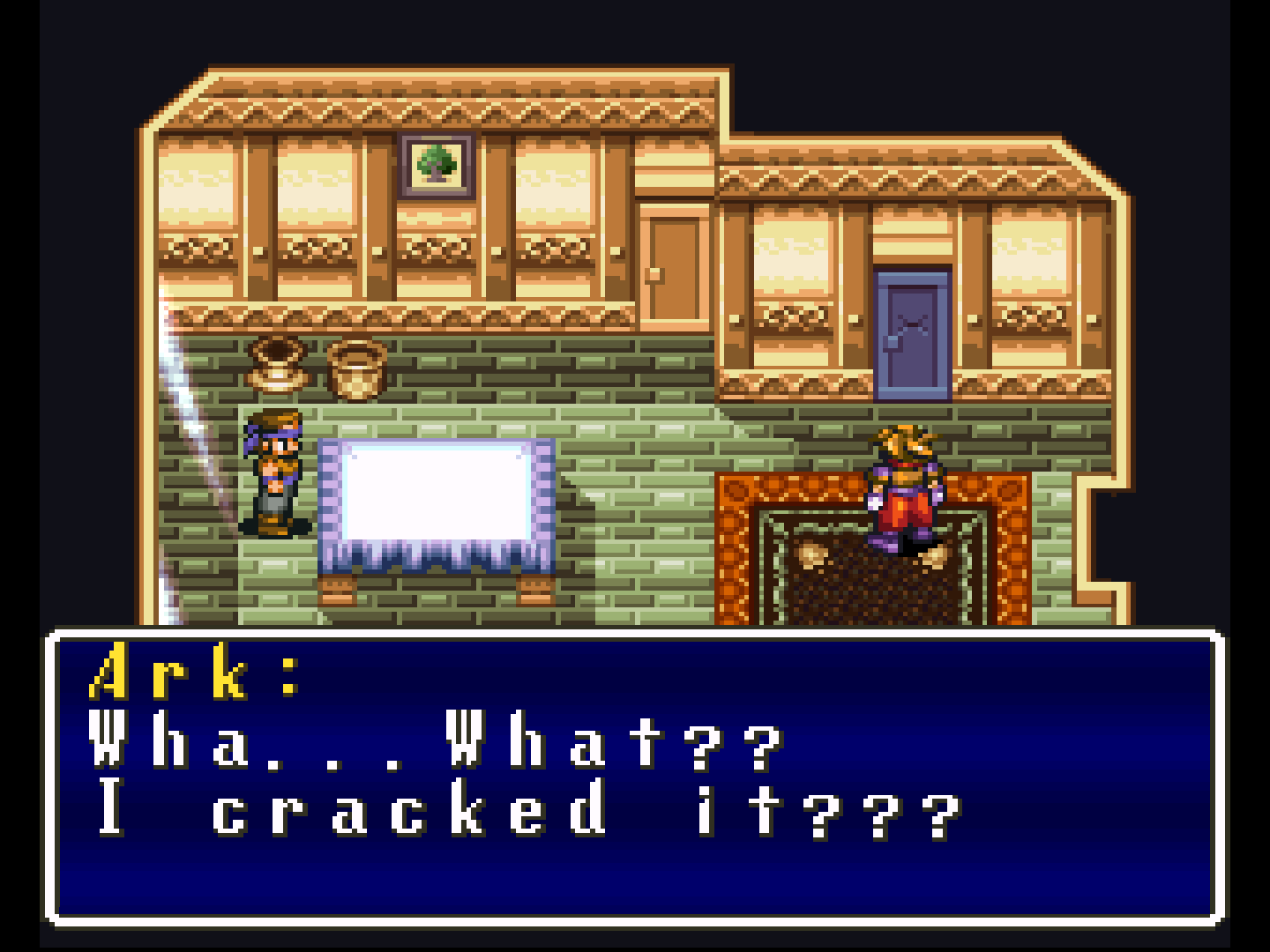 One more vase at the door, and it breaks! There's a staircase going down below.

I don't have a good feeling about this...