Going back to the northwest house, a girl mentions her new dream. 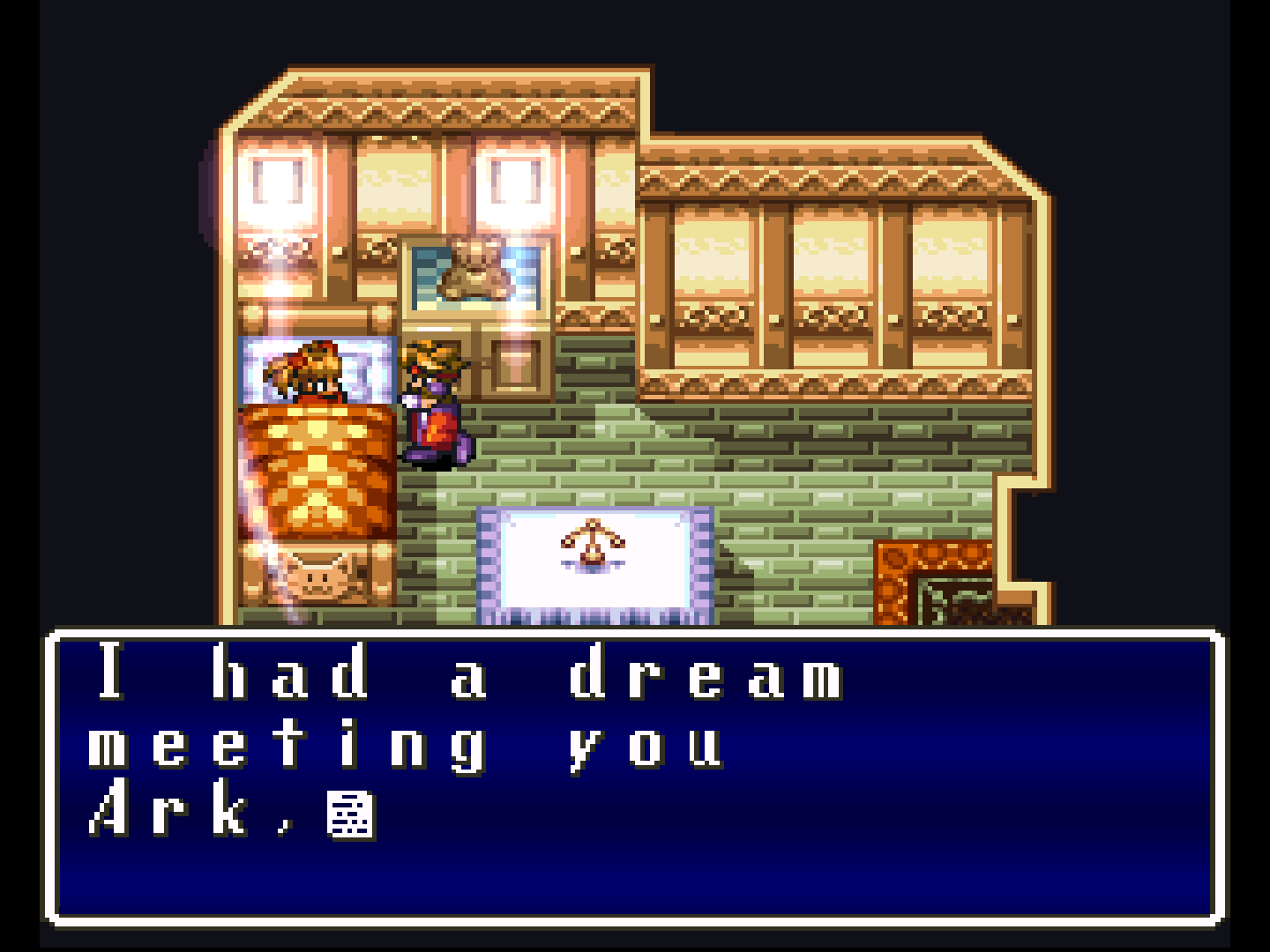 The mother and the son say the same things before they got frozen.

I go back to the Elder's house and have Ark sleep before saving again. 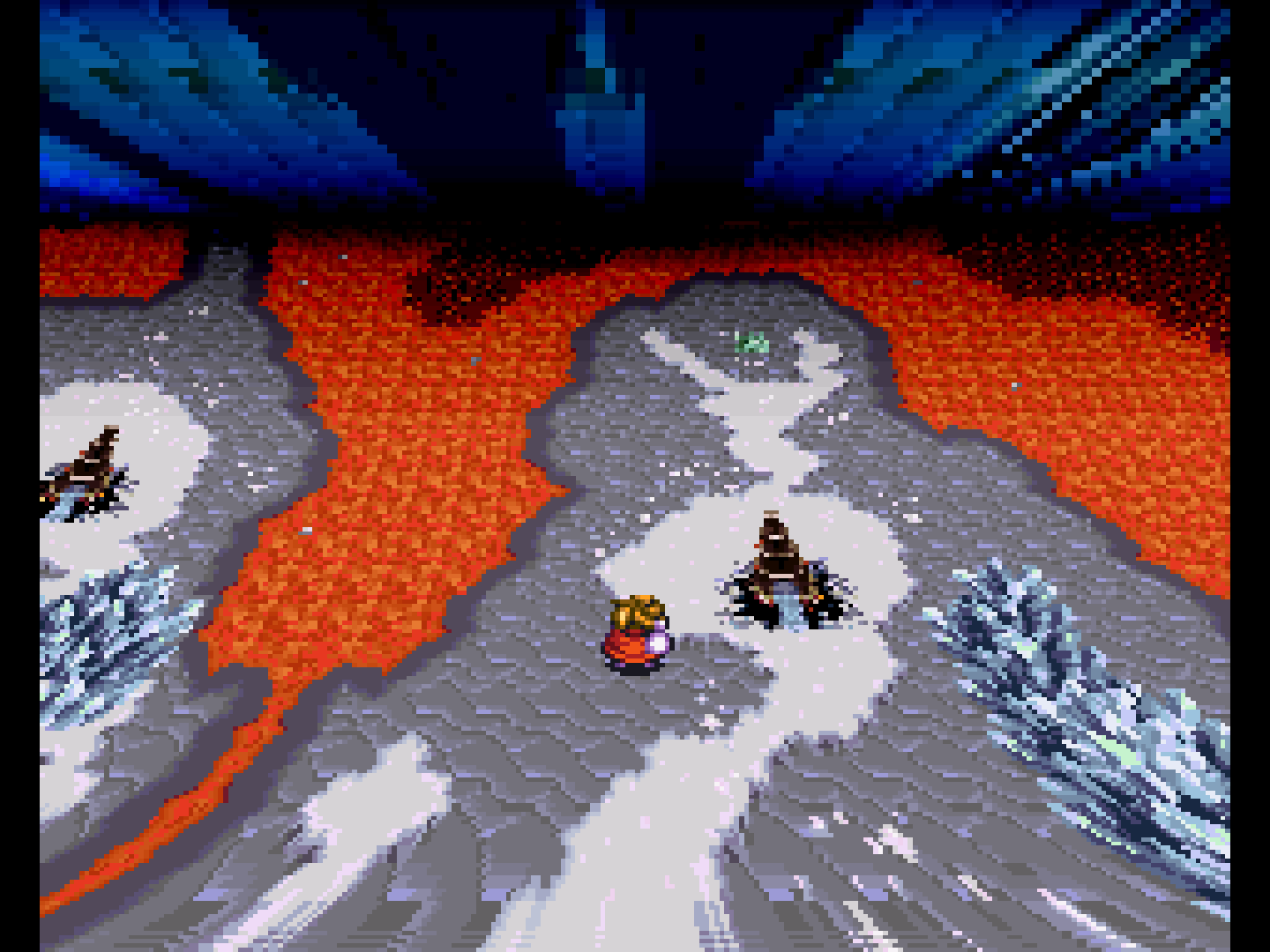 The fourth tower's outside is similar to the other three...except the face on the gate is placed higher now... 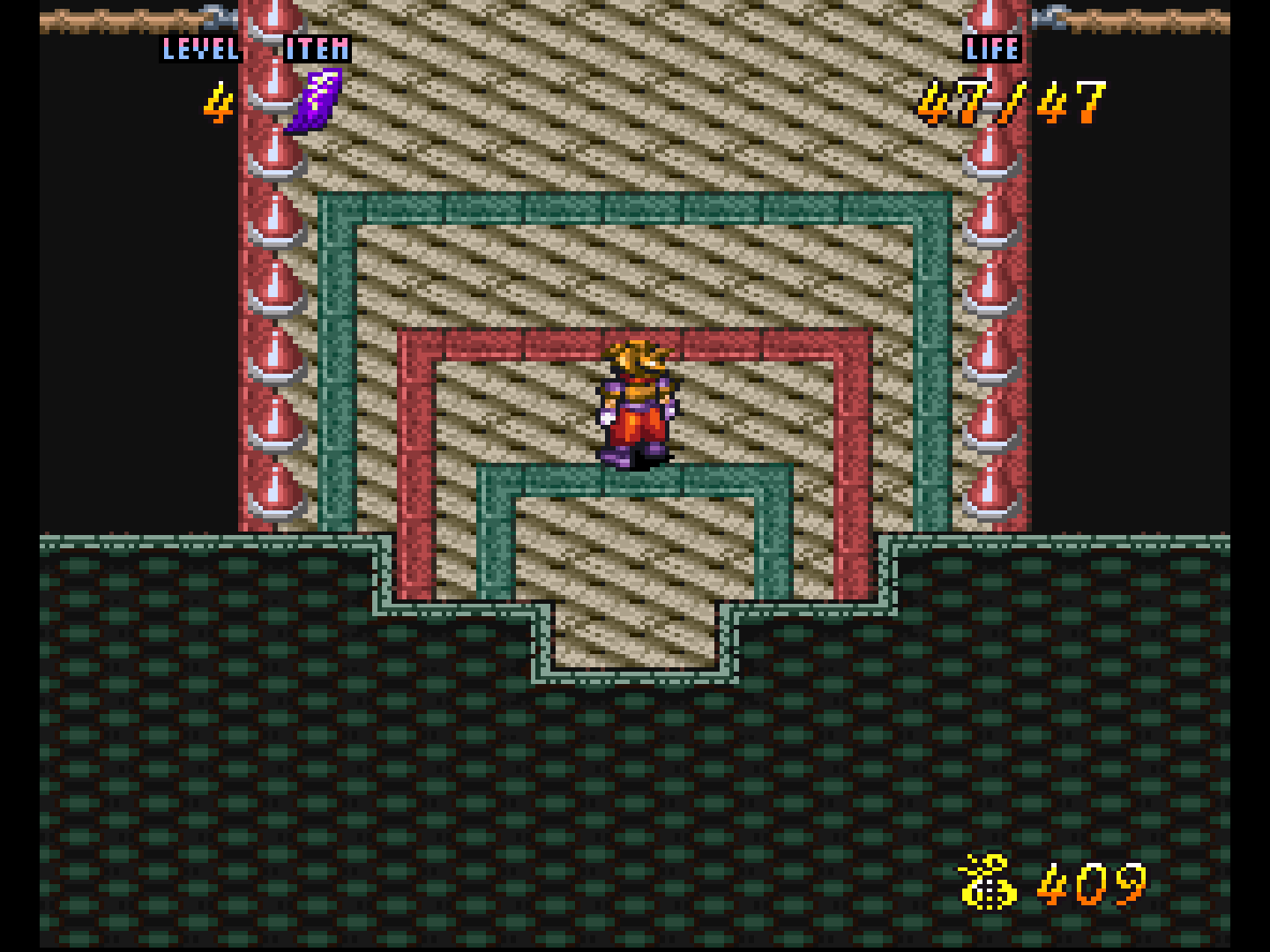 Did I step into Candyland?

And this is a bit of a surprise! 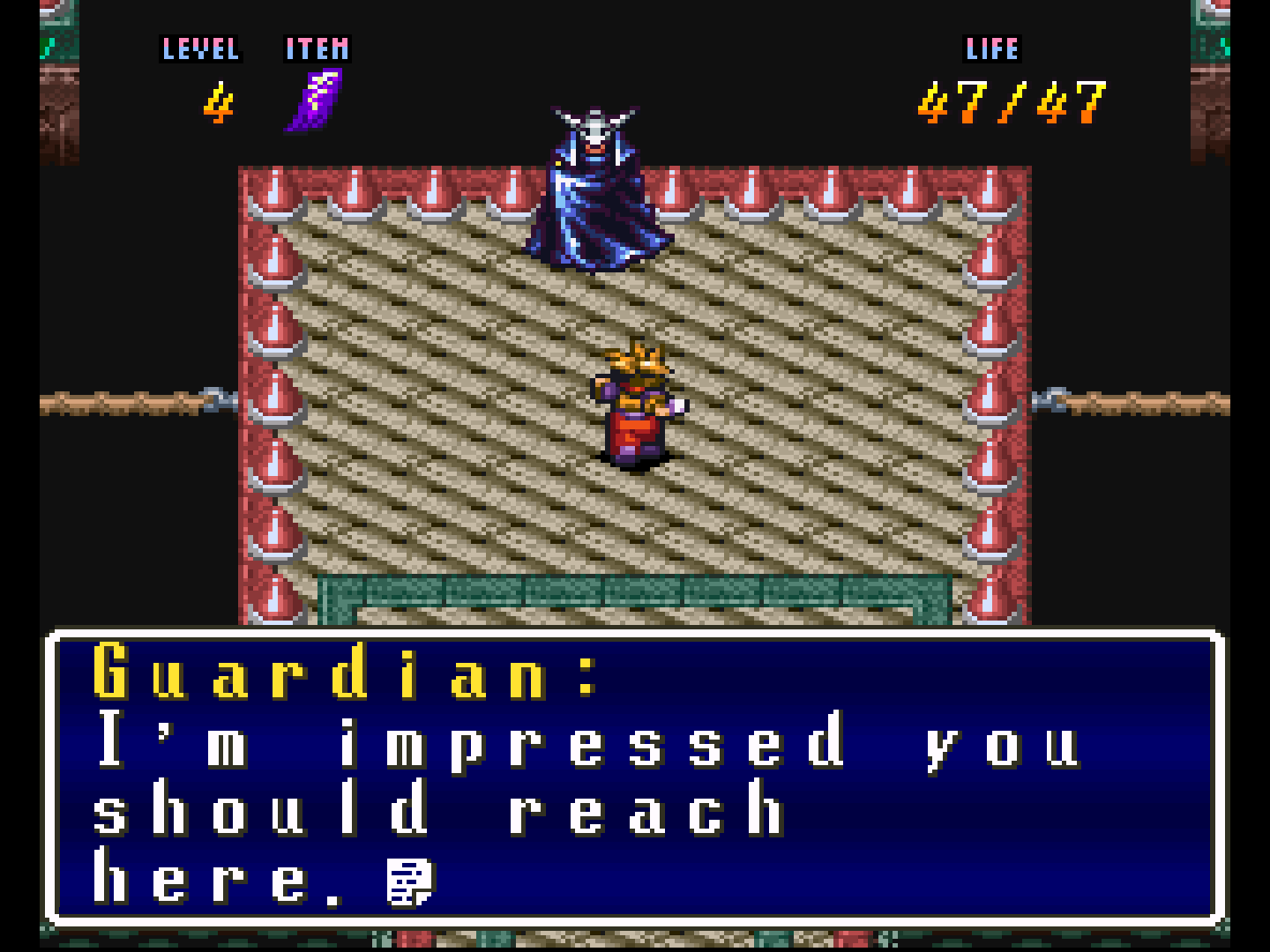 The Guardian chuckles at us again. What do you have in store this time? 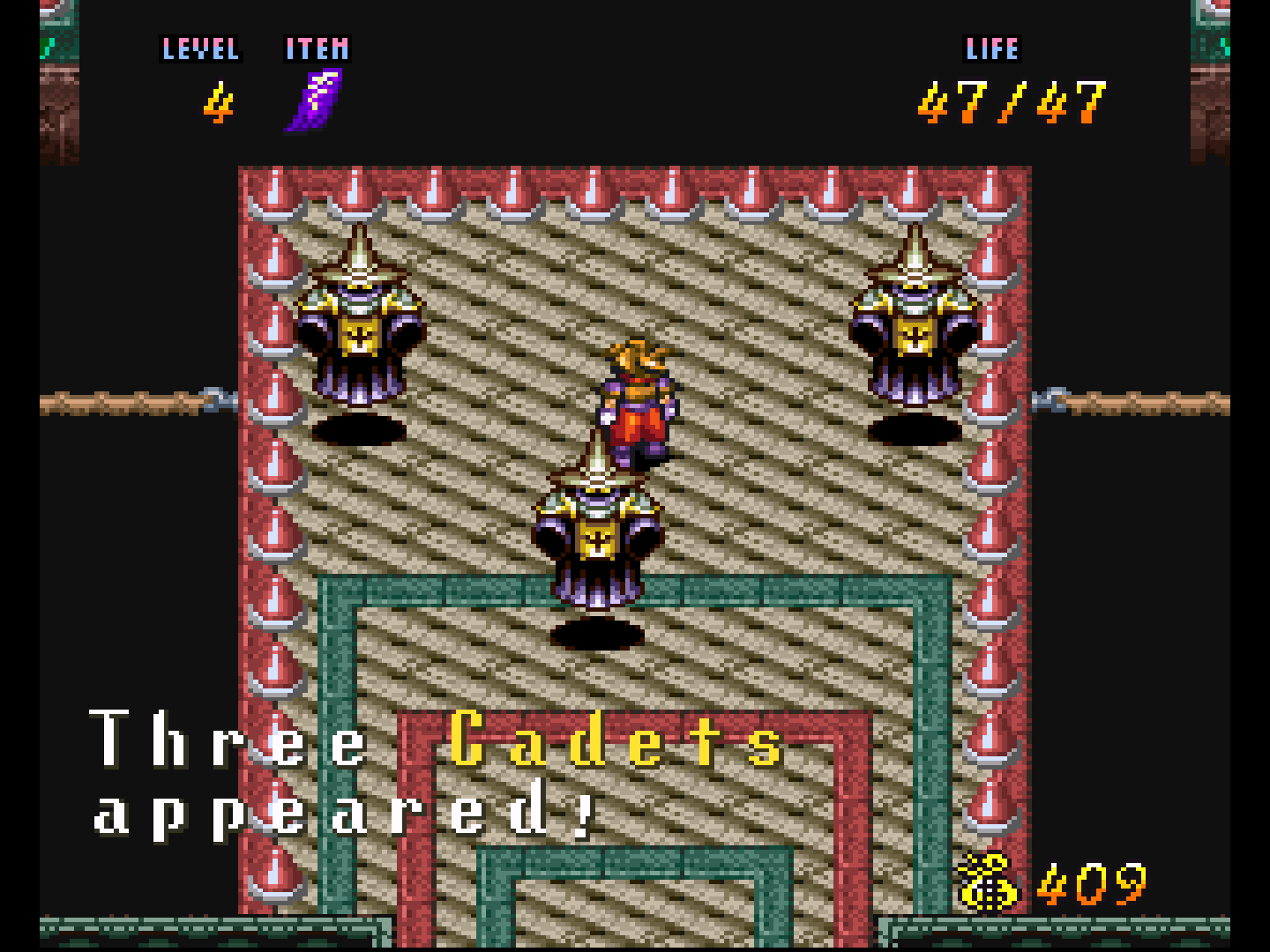 Lucky it's three Cadet mages instead of one mage and two illusions!

After they're gone, the spikes on both ends of the floor lower, opening a huge gap! The tightropes there are the only ways of crossing the chasm.

Let's see how Ark does here... 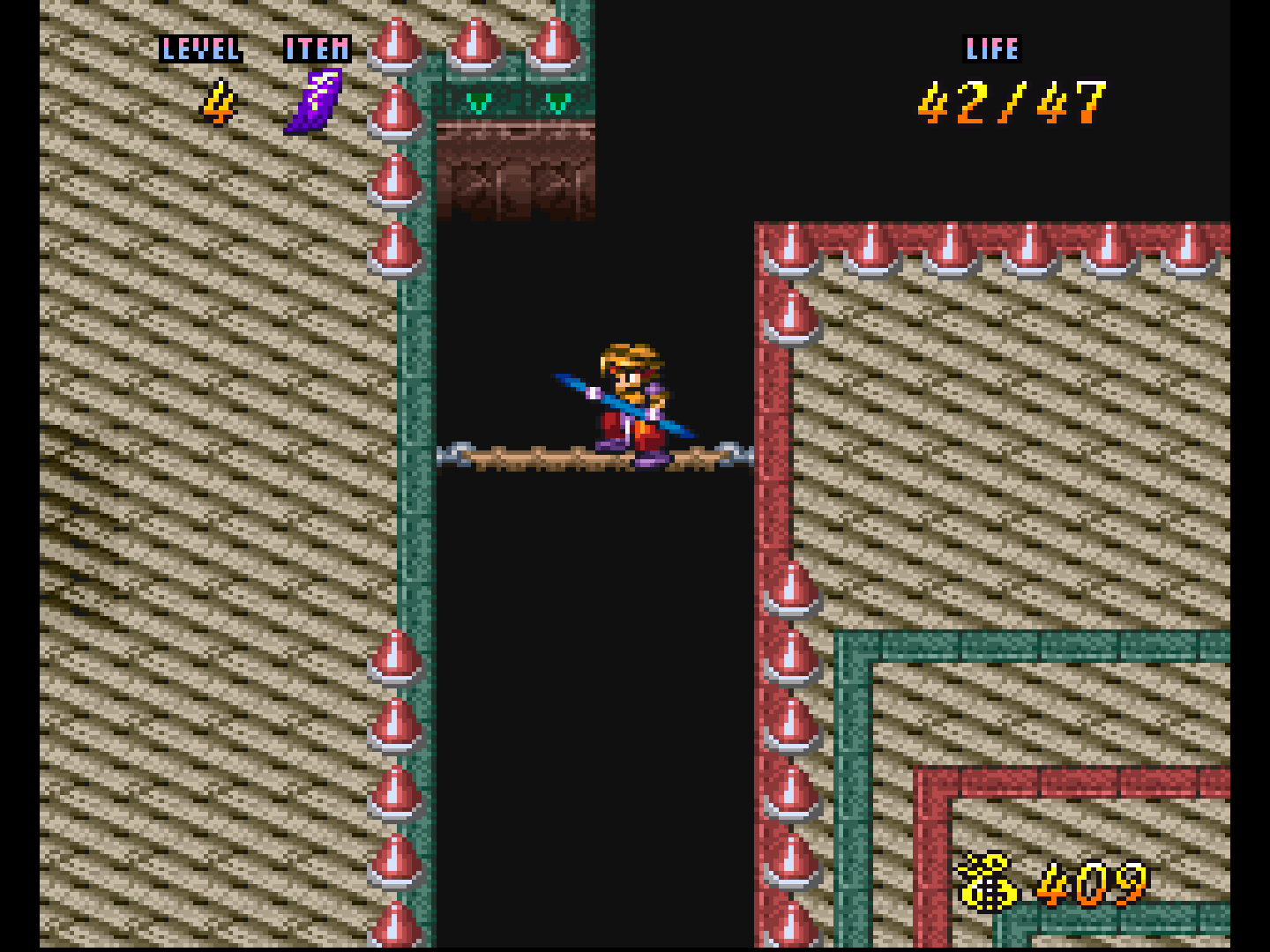 That was close. I'm guessing Ark might've walked on some clotheslines when he was younger as practice. The villagers weren't too happy, though. 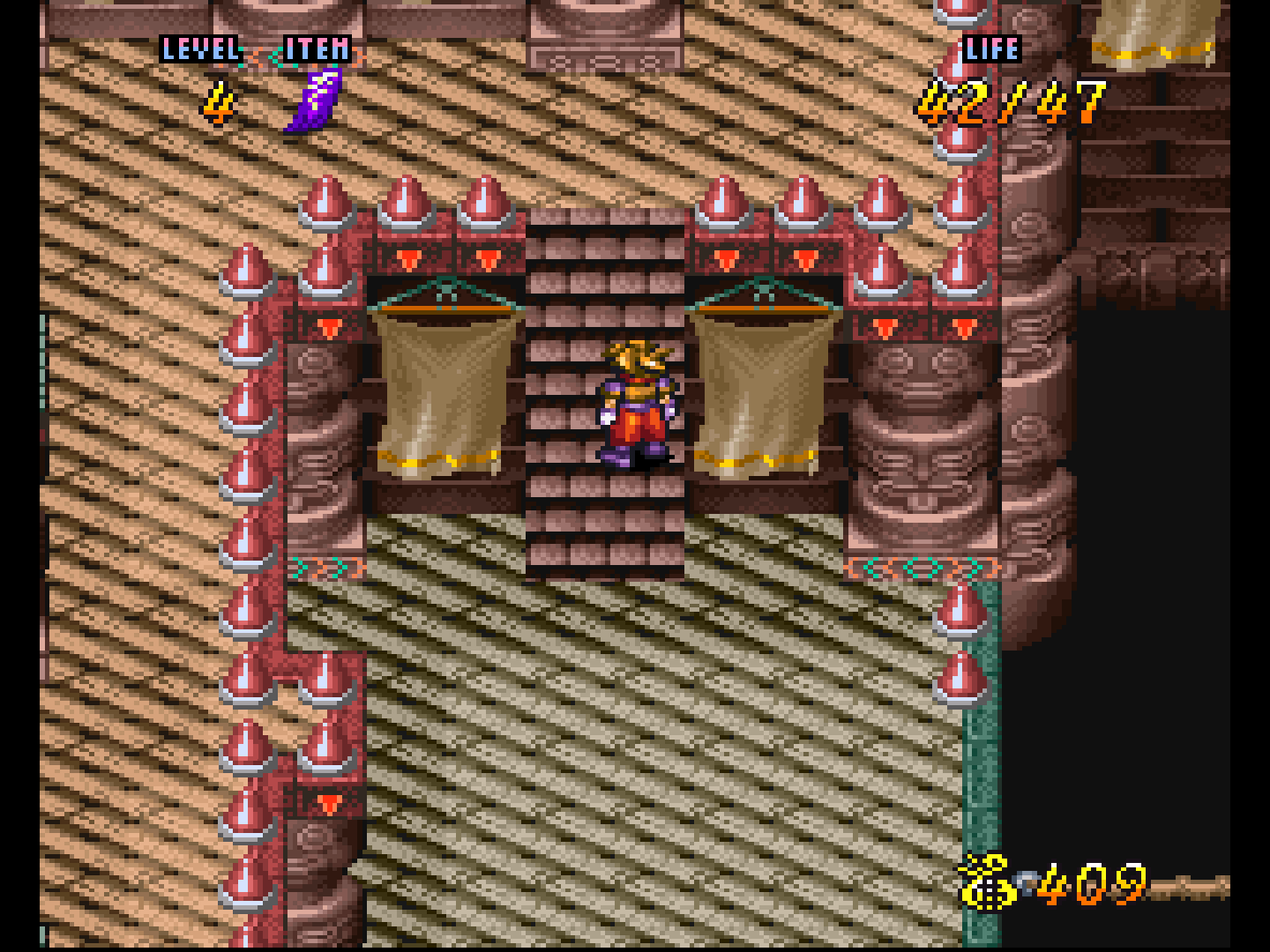 The detailed animation of the hanging drapes blowing looks nice. No wonder why this game is good.

The interior of the tower might be at home with the mages here.

After taking care of another Cadet mage, we free a soul: "Your courage is at test. At times, you must take bold chances."

I realize that I have to let Ark fall into the huge abyss here.

And we make it to the basement! 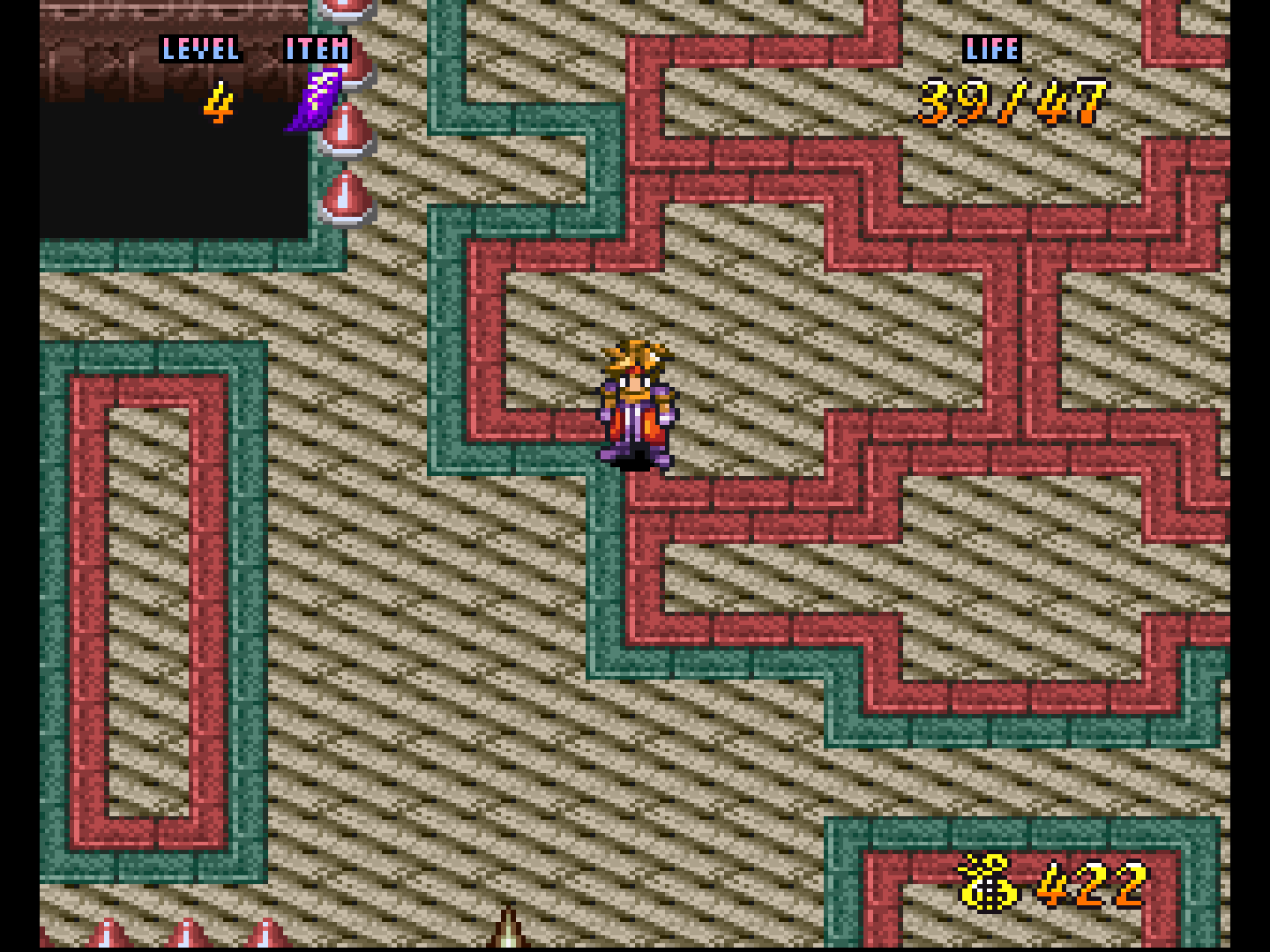 A Guardner tried to kick us out, but since Ark was wearing the Seal, it doesn't work!

More Cadet mages notice us, and prepare their spells!

Checking the map, there are 2 basement floors and 3 main floors for this tower. 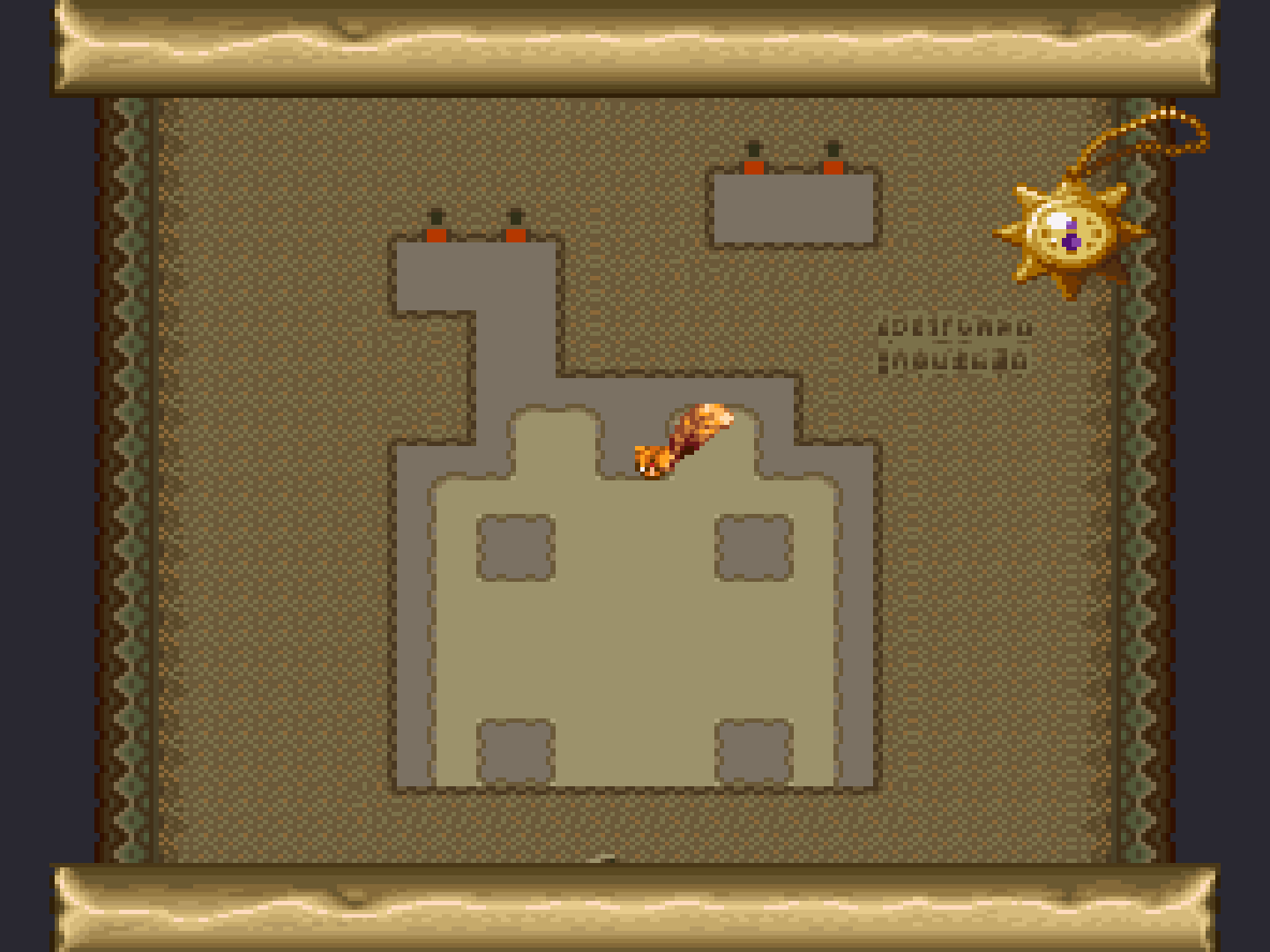 The only way forward here is to go down... 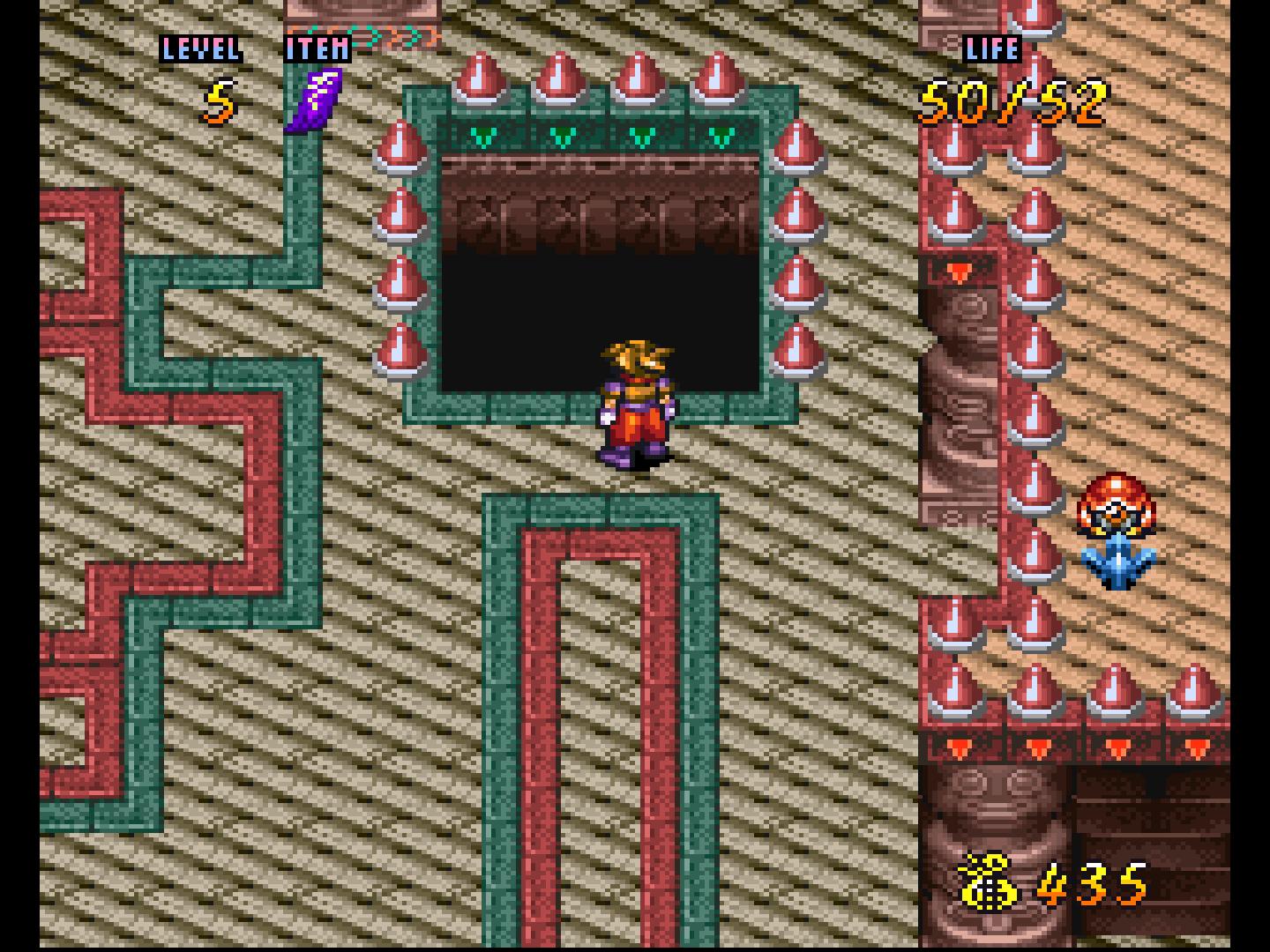 I clear the second floor basement full of enemies.

Upstairs, I get more money from a chest, and a Magirock.

After two more flights of stairs, and taking on more enemies, Ark falls while trying to get a foothold on the tightrope.

Back to square, or floor, one!

This time, I have Ark fall on to the southeast hole in first floor basement, where we end up in another part of the tower.

Through this path, we get a one way ticket to the top, or... 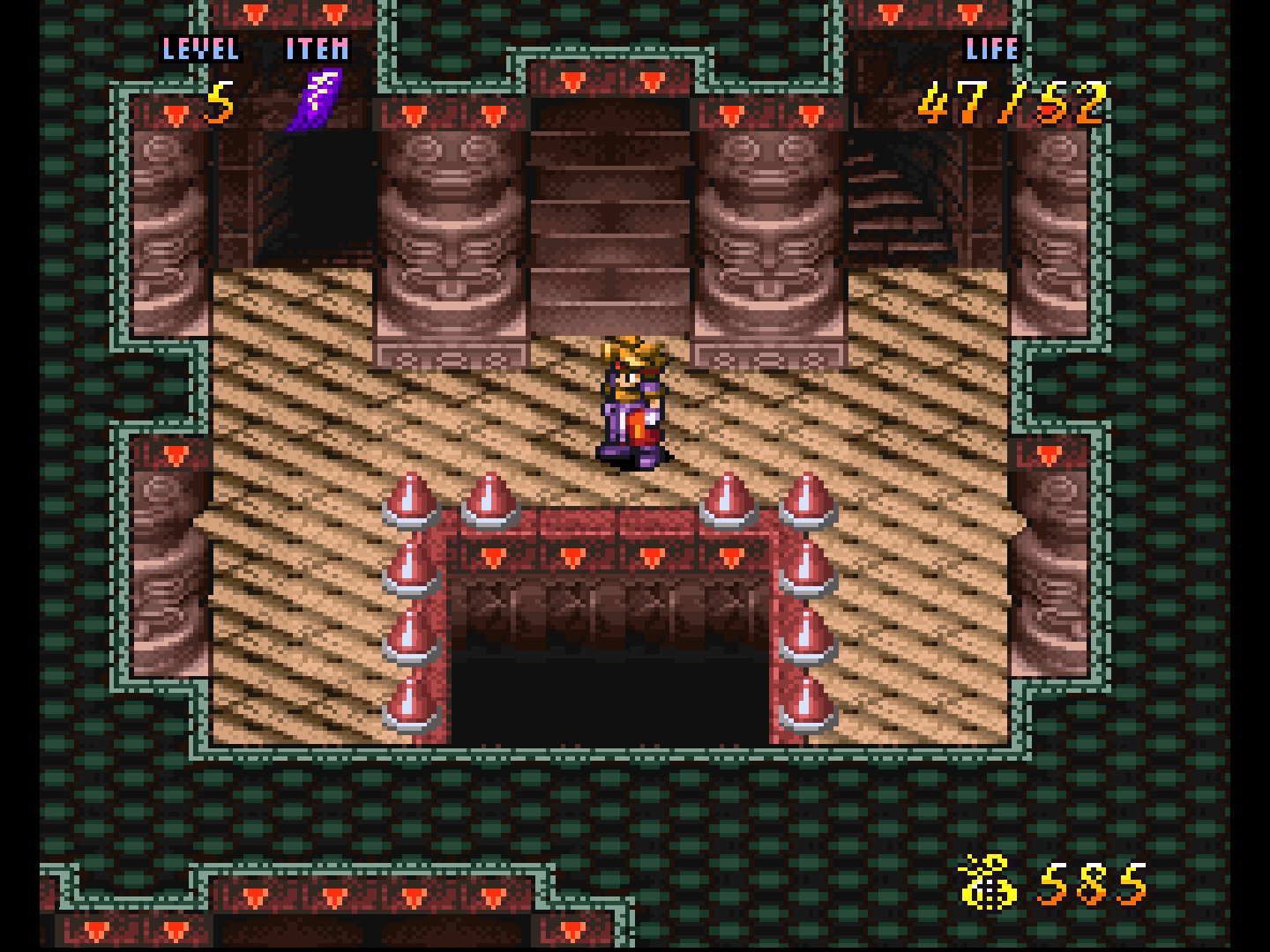 I decide to have Ark jump down the hole and go another way. There's some items here I haven't gotten yet.

Unlike the other Quintet games I've played, the enemies regenerate for each floor.

I manage to pick up more Magirock on the second floor. 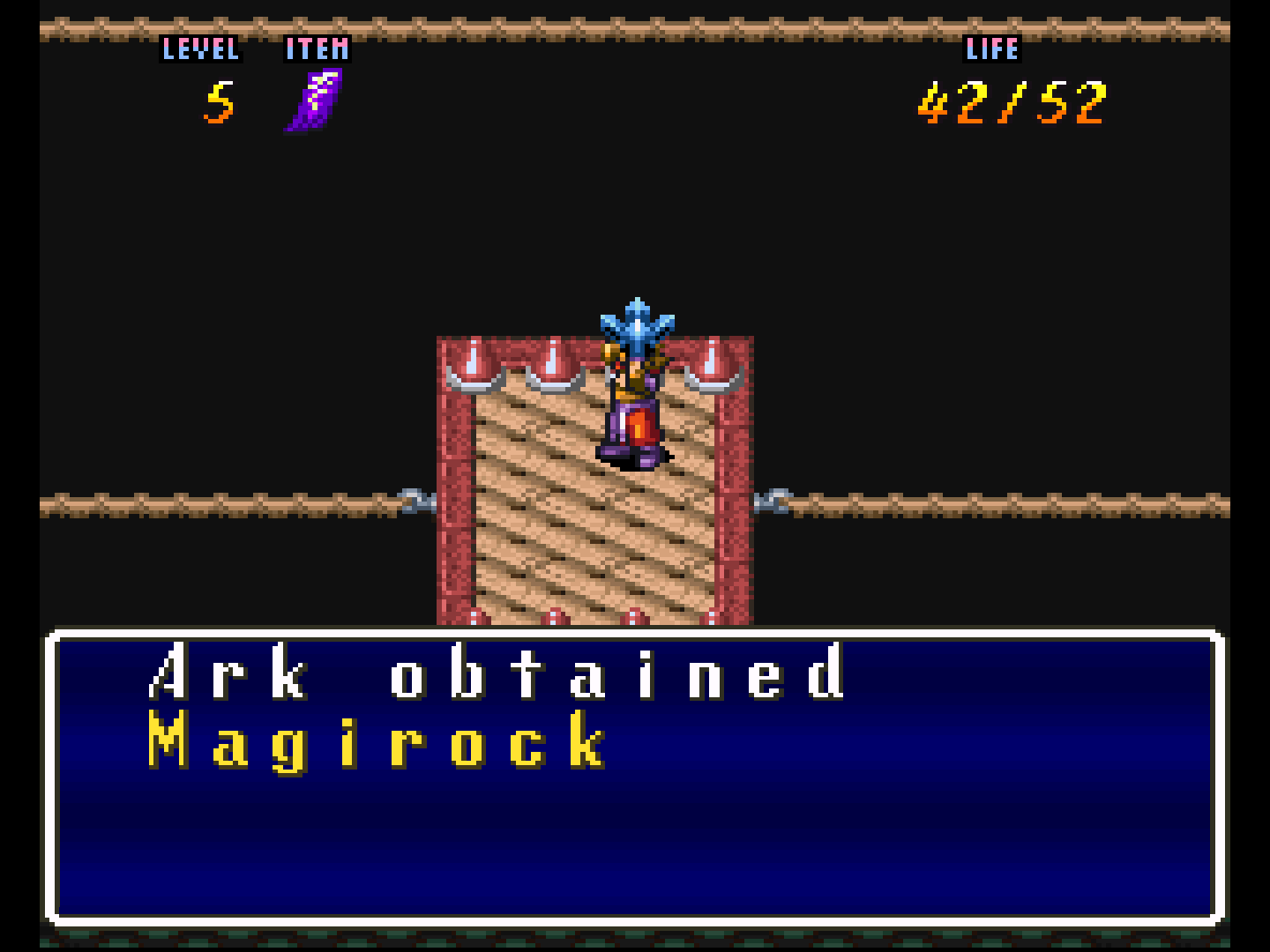 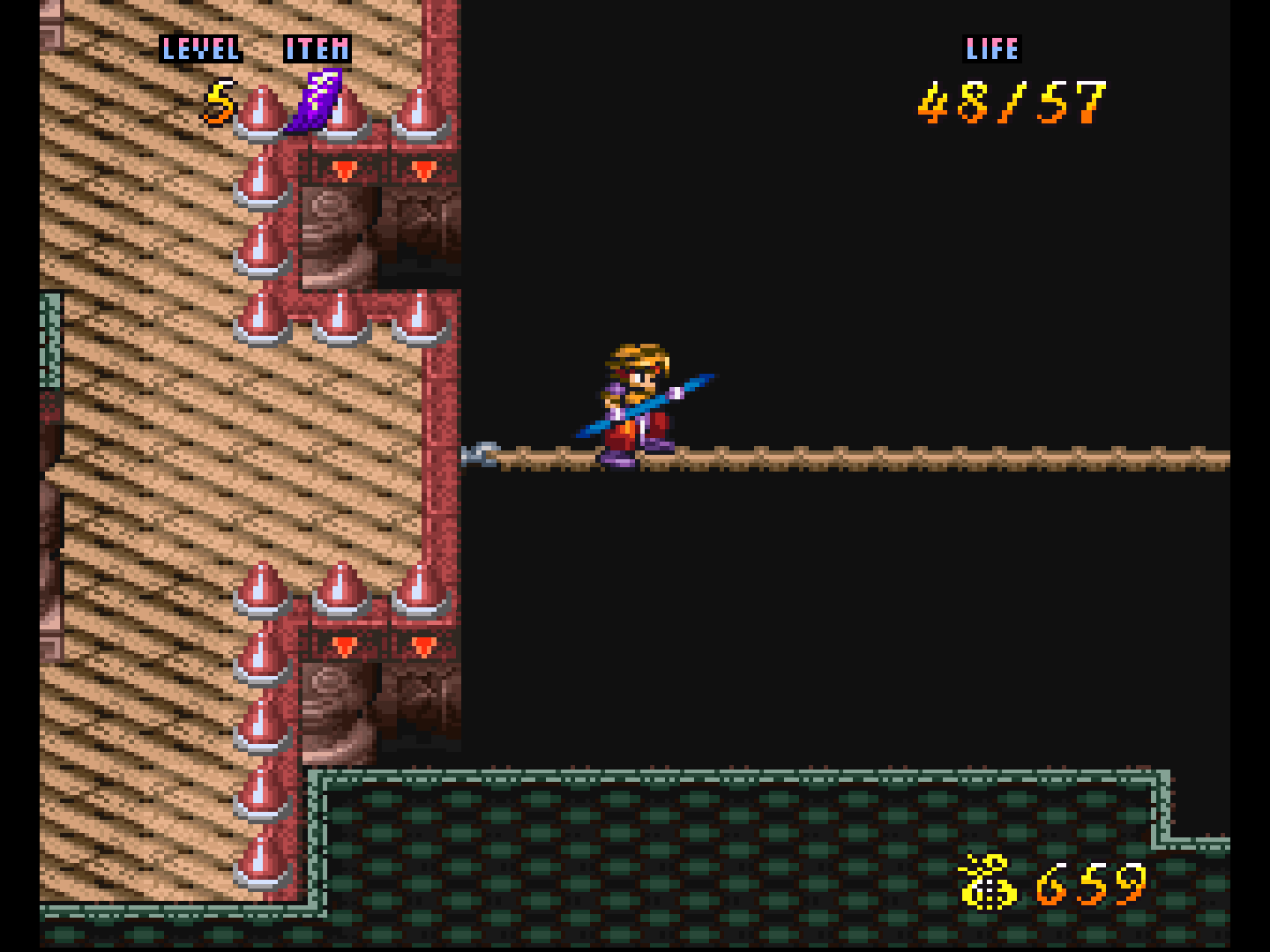 And after crossing the tightrope and meeting more enemies, our rewards await! 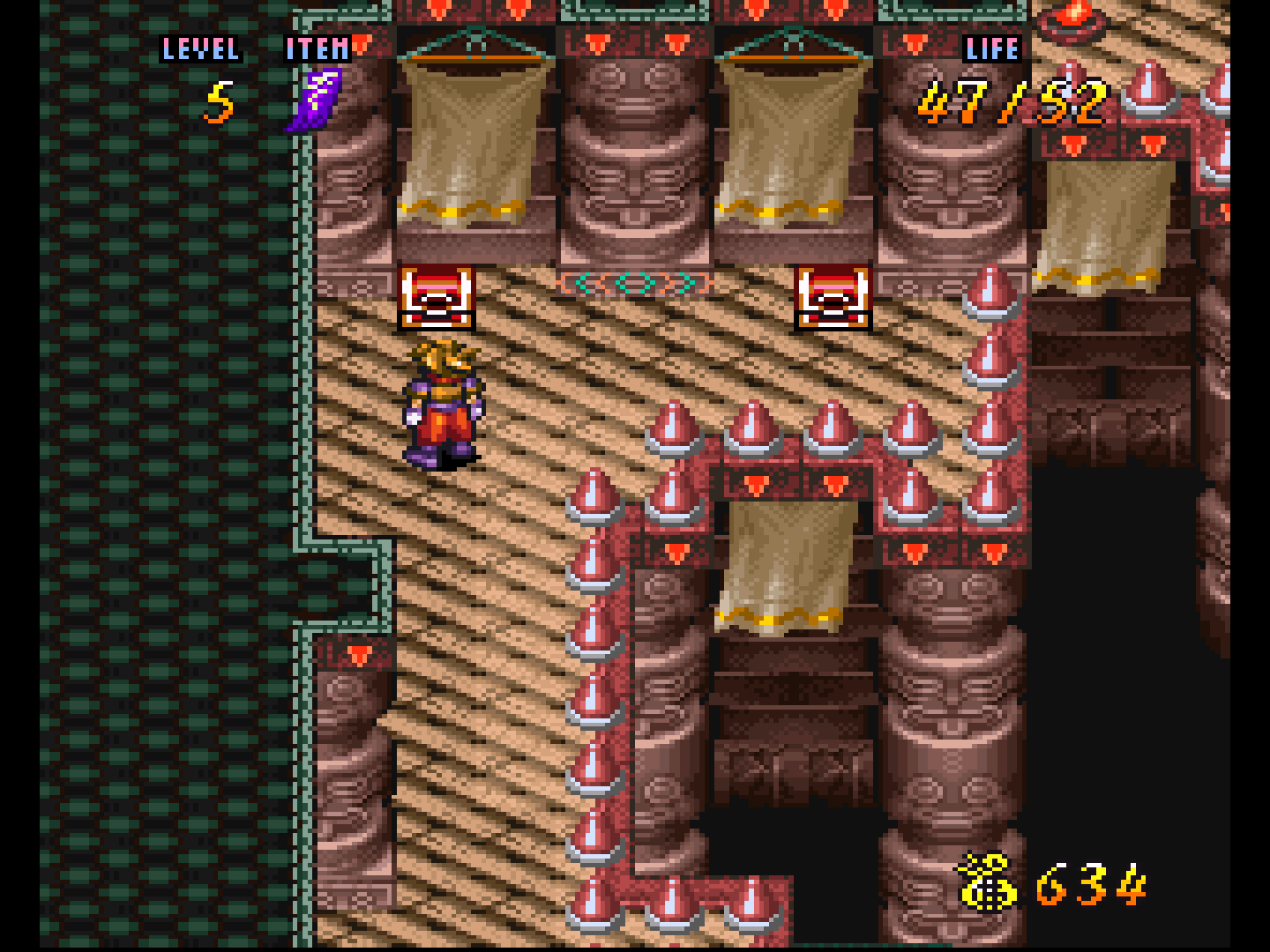 We win a medium bulb of garlic in the first chest, and a Life Potion in the second. 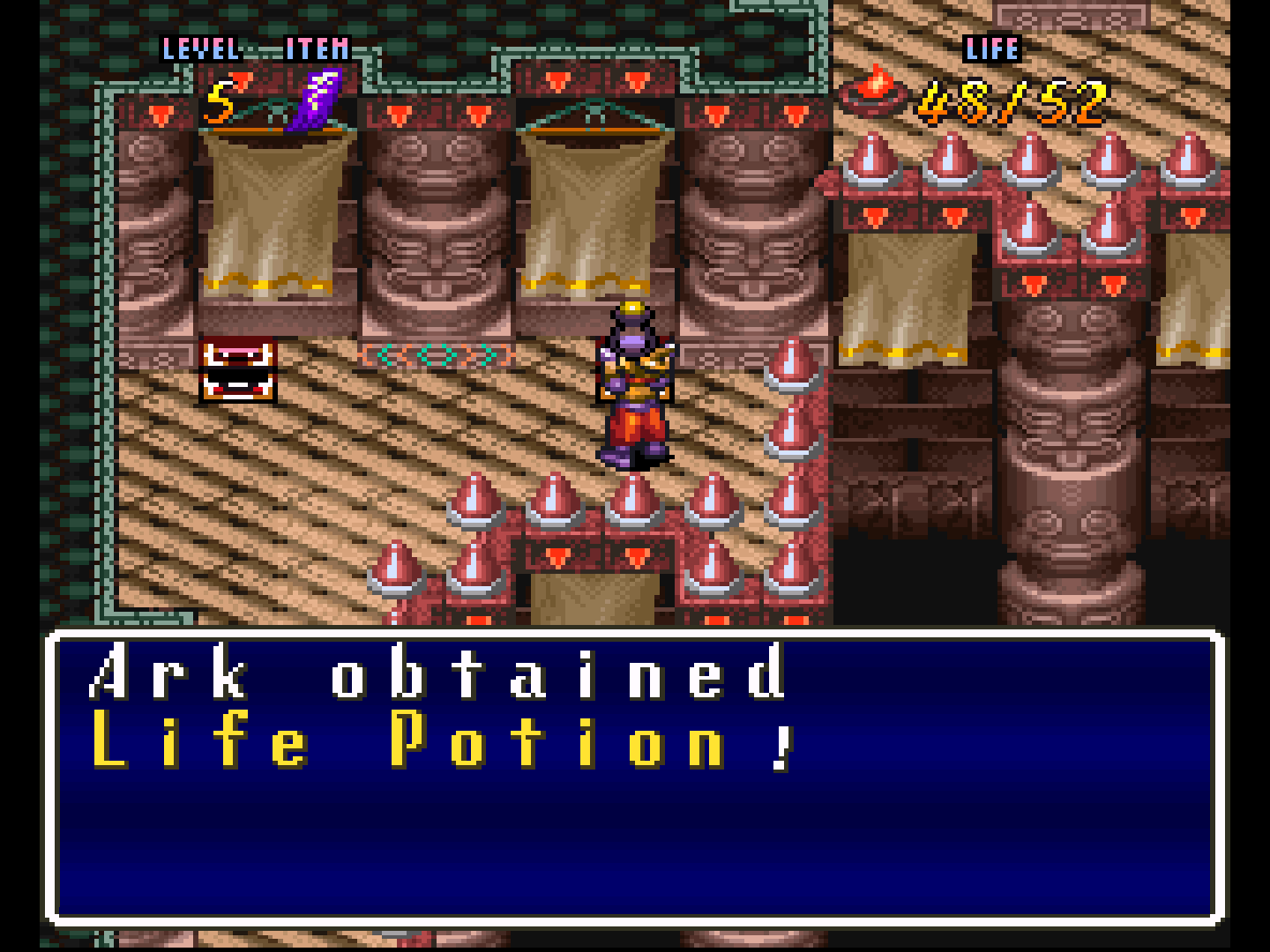 I wonder, is a Life Potion the game's equivalent of a Wonder Essence or a Fairy? No, I realize that it's a Heart Container! I use it immediately.

I have Ark walk the long tightrope to go back to the stairway. 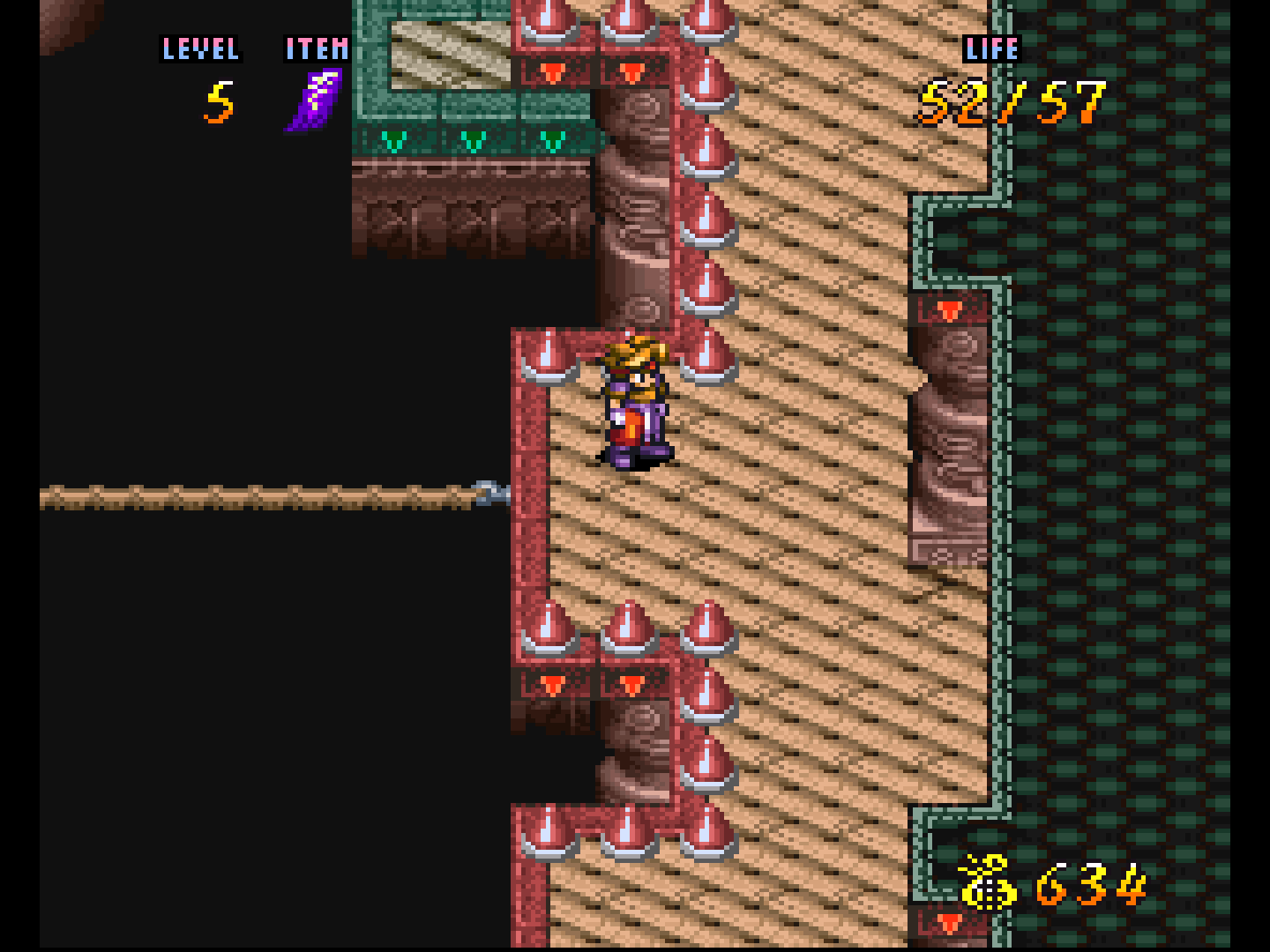 At the northwest passage, I pick up something from a chest that might help Elle with her weaving... 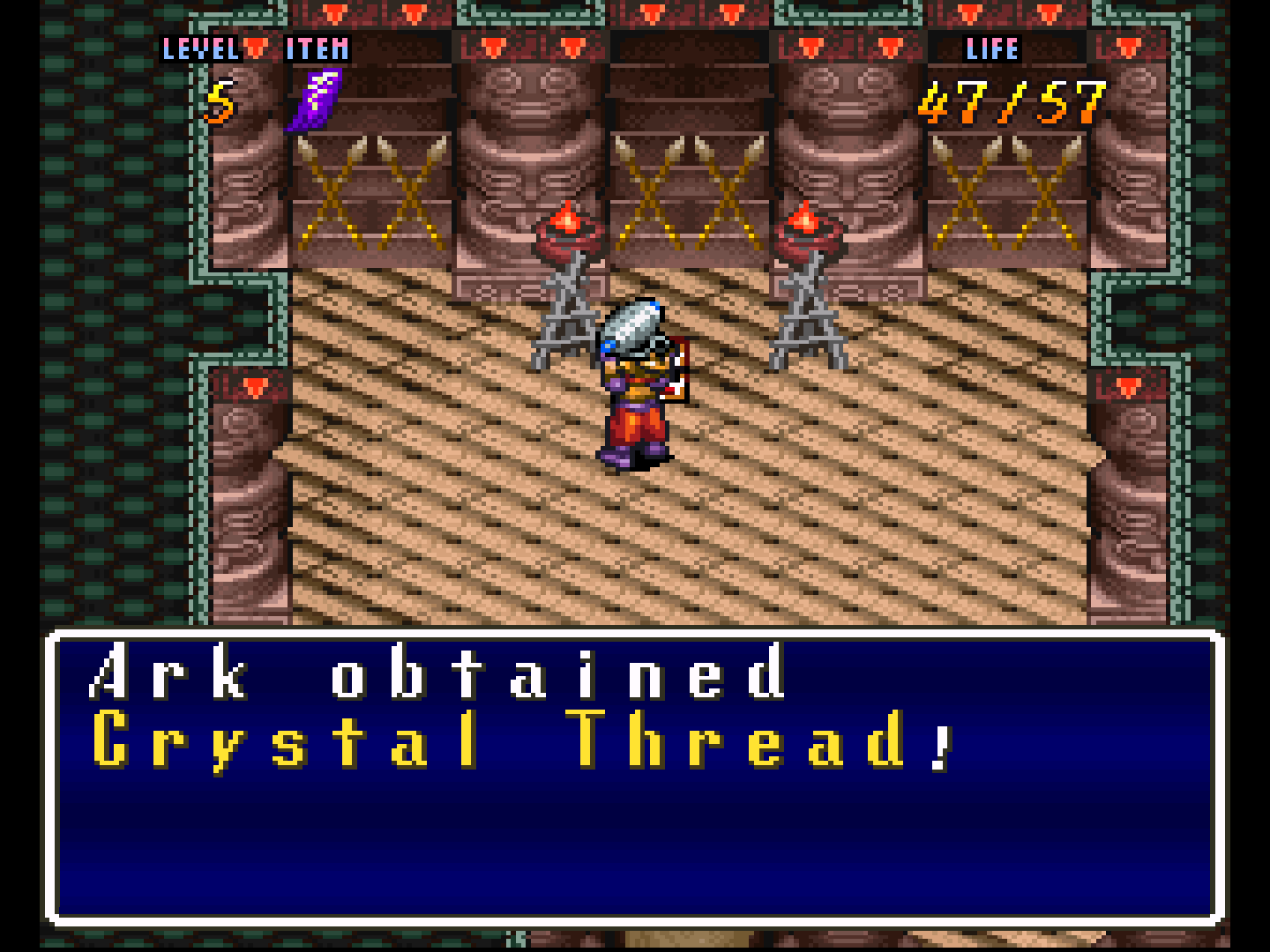 Lucky for this hole, at least it doesn't throw us back to the first floor...

I have Ark continue tightroping. 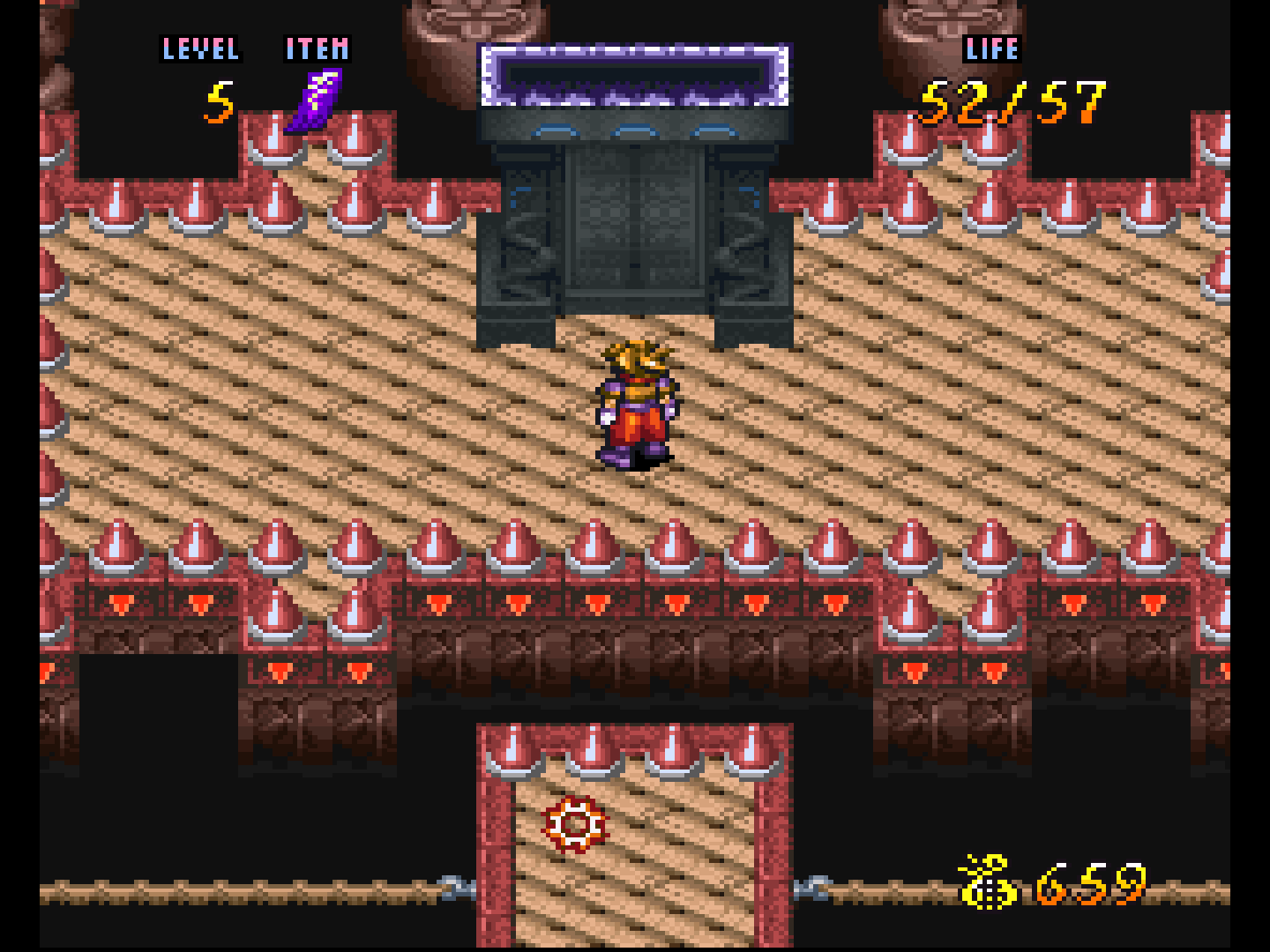 How could we open that door?

The Guardian calls to us as we step forward.

Guardian: "I have prepared a most entertaining show for you. Savor it. Enjoy." Oh boy...