Since I have some extra time, I decide to finish completing the rest of the five towers, and revive the world.

My new controller doesn't want to connect to my Pi for some reason... 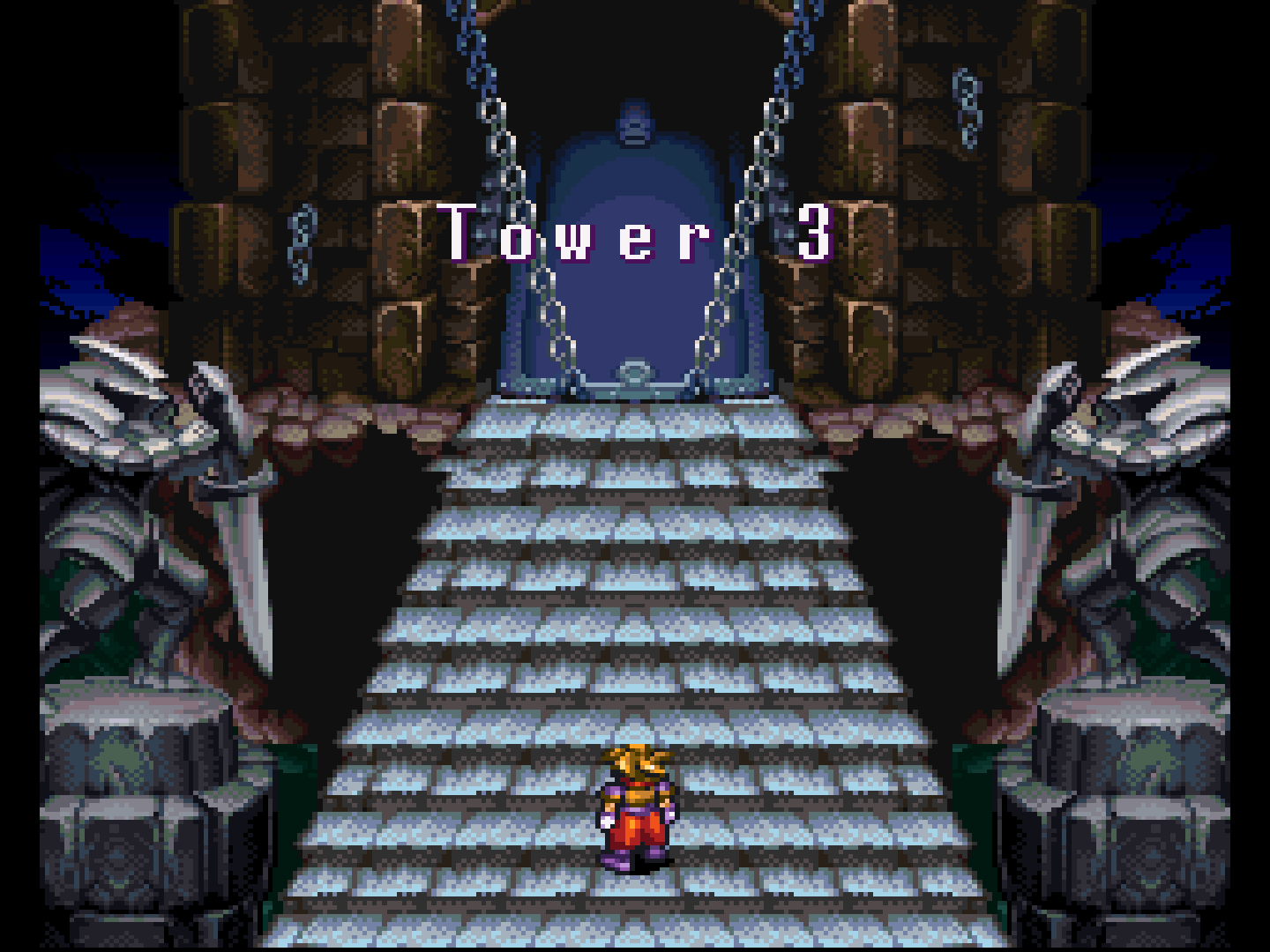 Third tower looks the same as the previous two...

The gate rises to let us in. I'm guessing the Guardian from the first tower telepathically told the other four about our arrival. 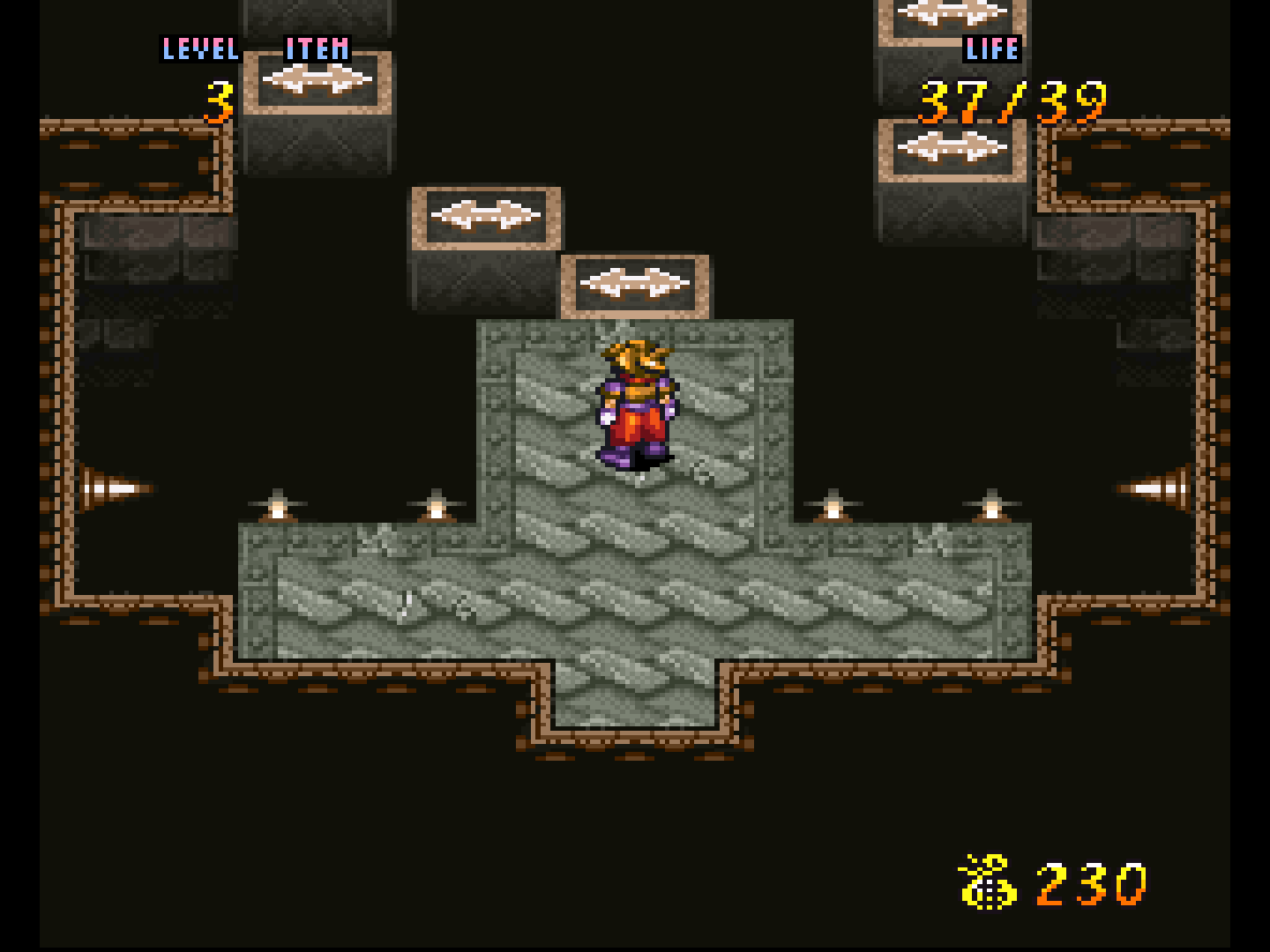 The platforms move to the center to let us through, as if they wanted us to move forward.

It seems that Ark can also fall into holes too, like in a Zelda game...

I manage to have Ark jump across the gaps and circle around to the staircase at the north end.

As I go around, the platforms to the next floor fall down...

I double back to the center to take care of more enemies, and check Ark's stats.

In a certain spot, I slip and Ark falls. Instead of losing health, we're now in this empty room... 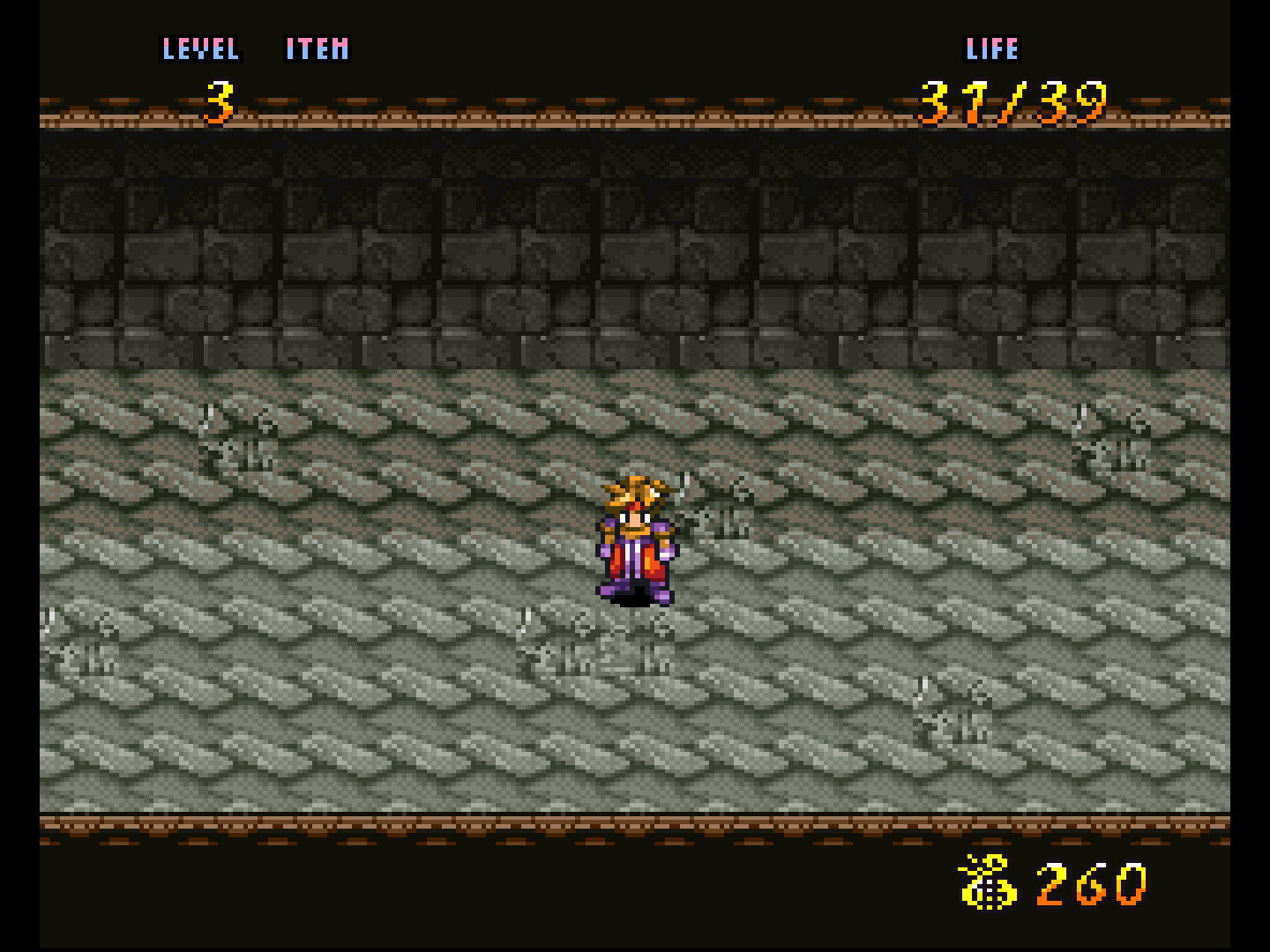 I have Ark find some Magirock in the west end of the room, and go up.

Menu again. Whenever I press B, Yomi flies to the center door when I'm in another room of the menu.

I see a chest nearby, but how to reach it?

Ark walks through a little gap on the right of the stairs, and we're greeted by another flame orb! We get the stuff in the chest, and head up. 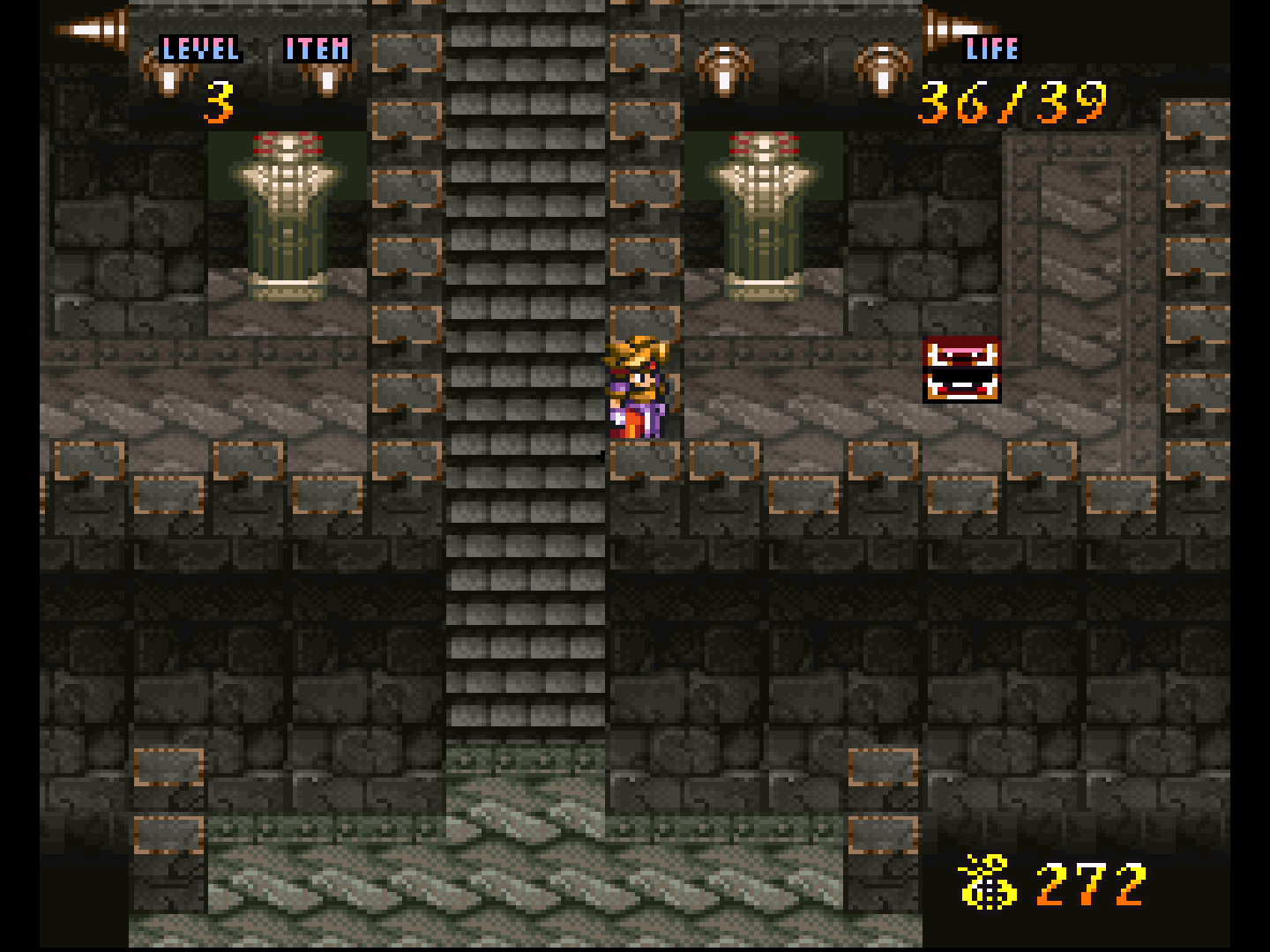 After a red Huball's taken care of, Ark levels up! 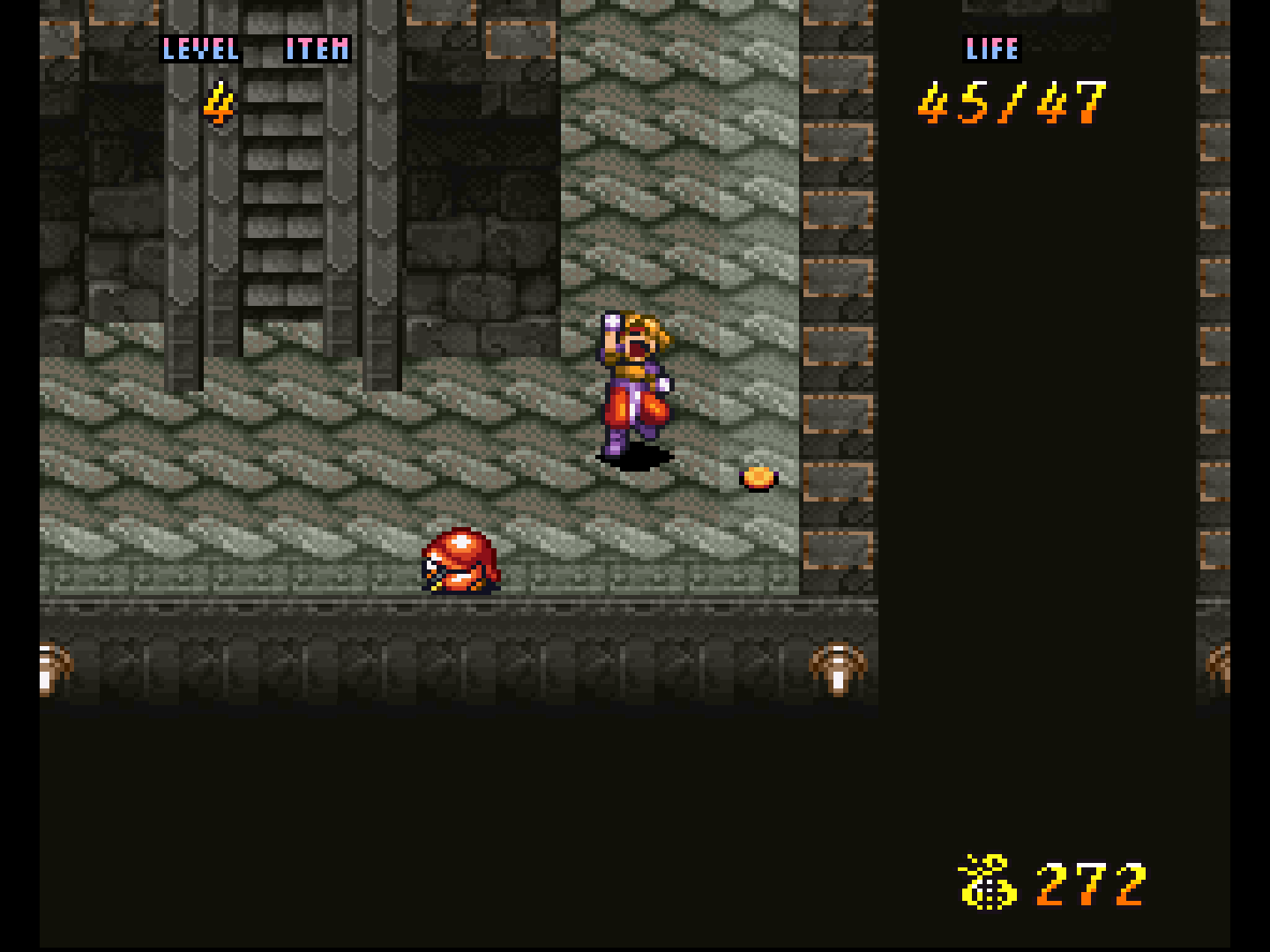 Well, this is going to be a bit challenging... 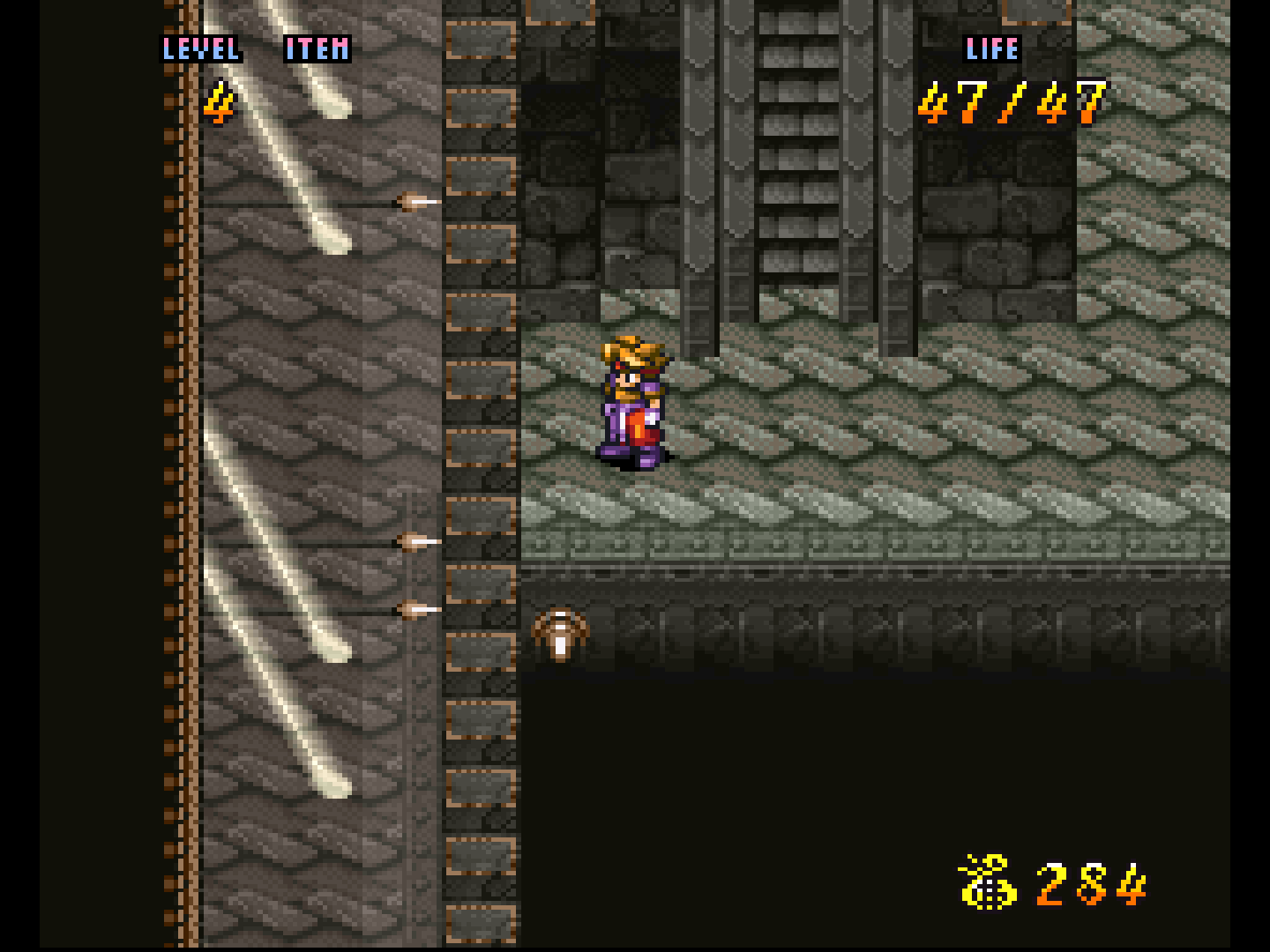 While passing through the hall, I accidentally bump Ark into the point of a spear!

I realize that if I tap twice on the same direction on the control pad, Ark dashes, abg hayvxr Evpugre va Flzcubal bs gur Avtug... 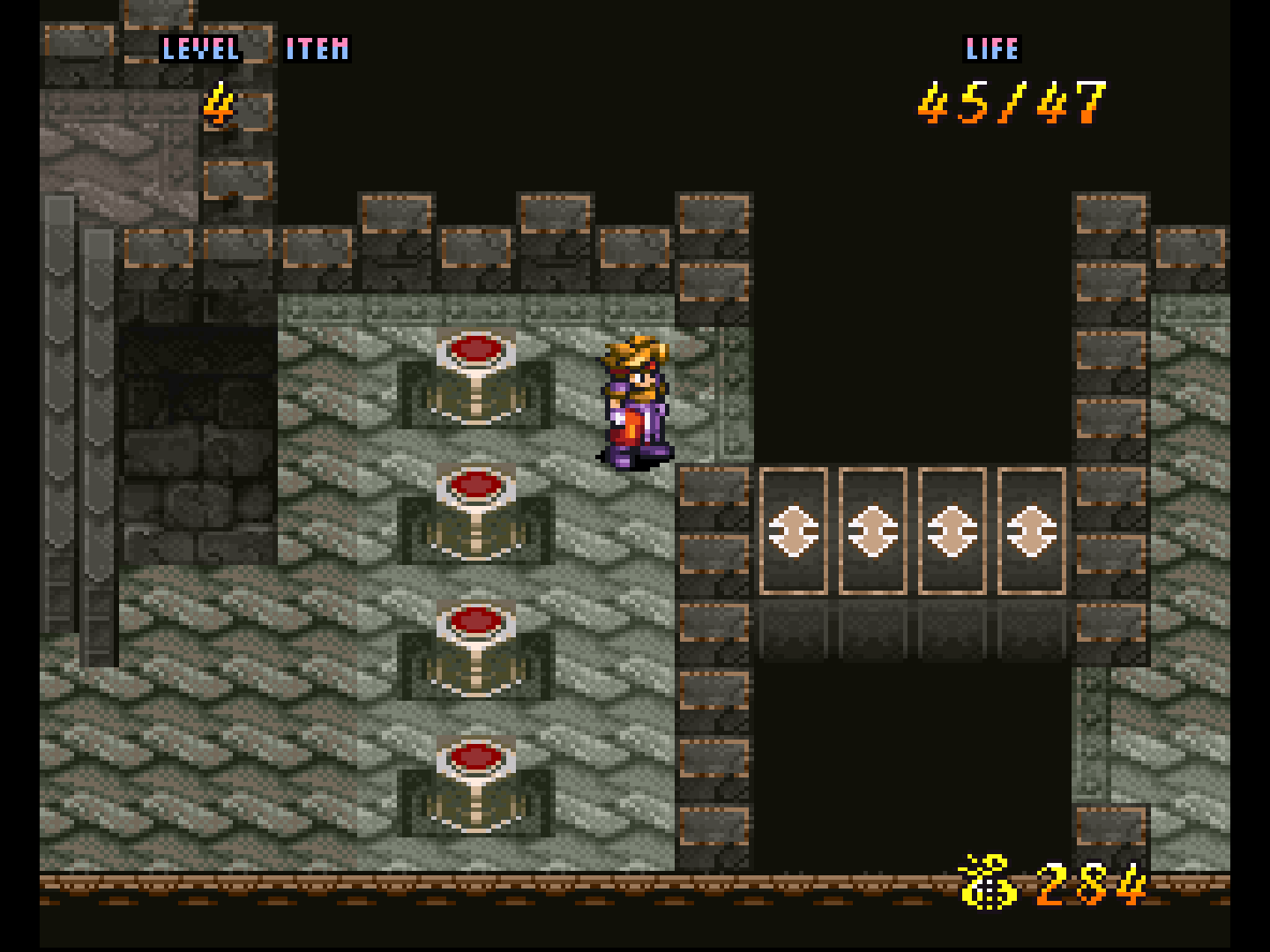 So pushing each button makes the arrow platforms on the right move vertically, and turning them off stops them.

With careful timing, I move each platform into somewhere reachable.

Guardner is a huge, blue-fire specter that shoots out tiny flames!

I have Ark try to hit him, but he's invincible!

The tiny flame, or the sparkles he shoots out, puts Ark into a deep sleep!

I think Guardner's weak against magic spells. Sadly, I don't have any.

Upstairs now, where we run into another Cadet mage. Both Ark and the mage glare at each other for a few seconds... 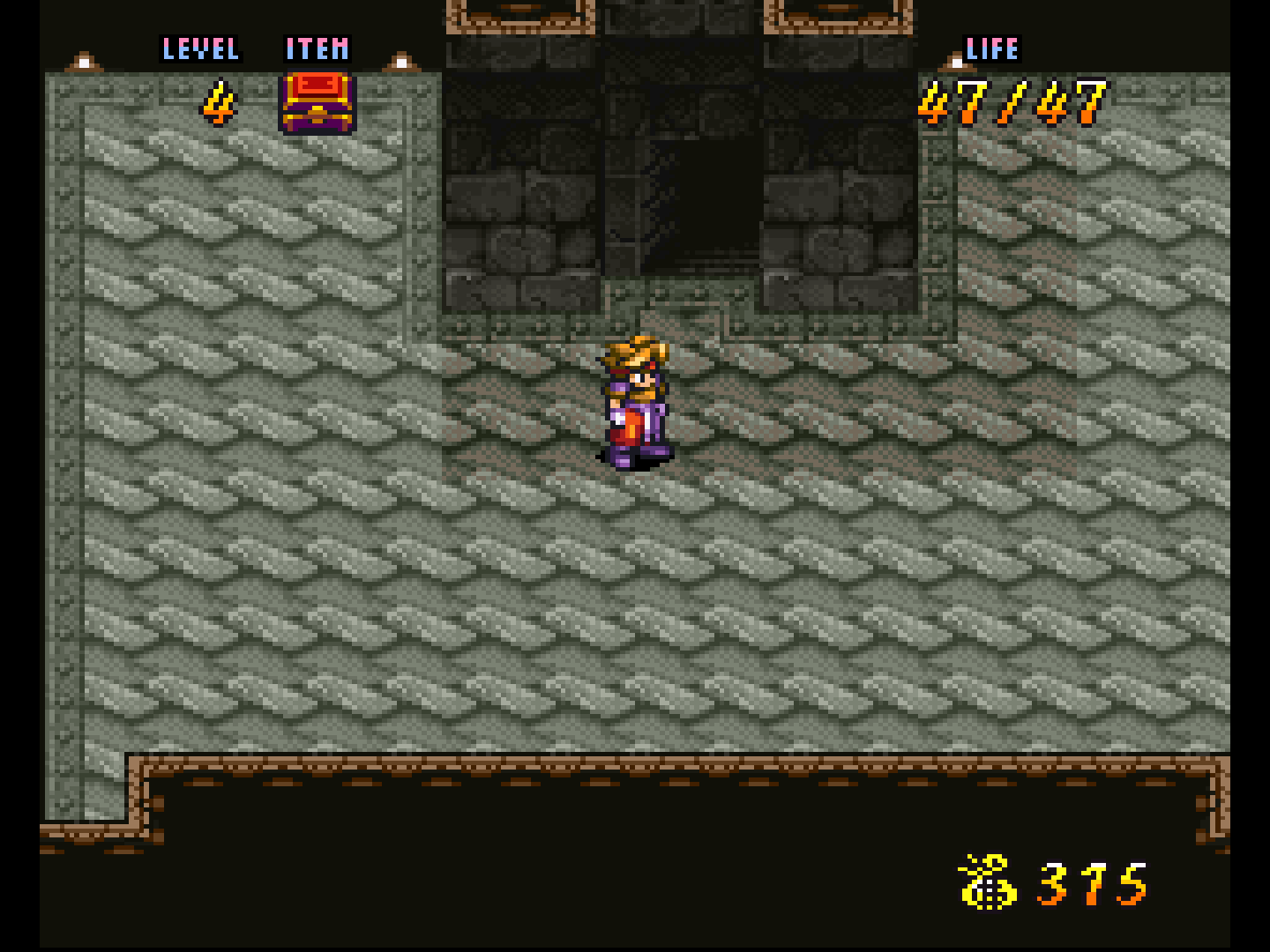 ...then we proceed to take care of them!

After leaping past the west gap, I learn that Guardner is basically this game's equivalent of a Wallmaster!

After making Ark sleepy, he sucks him into a vacuum, and kicks him back to the beginning of the tower!

Back to the fourth floor, where I charge through the floor once again, until a mage glares at Ark and stops him cold for a moment!

I circle around the floor, a bit lost... 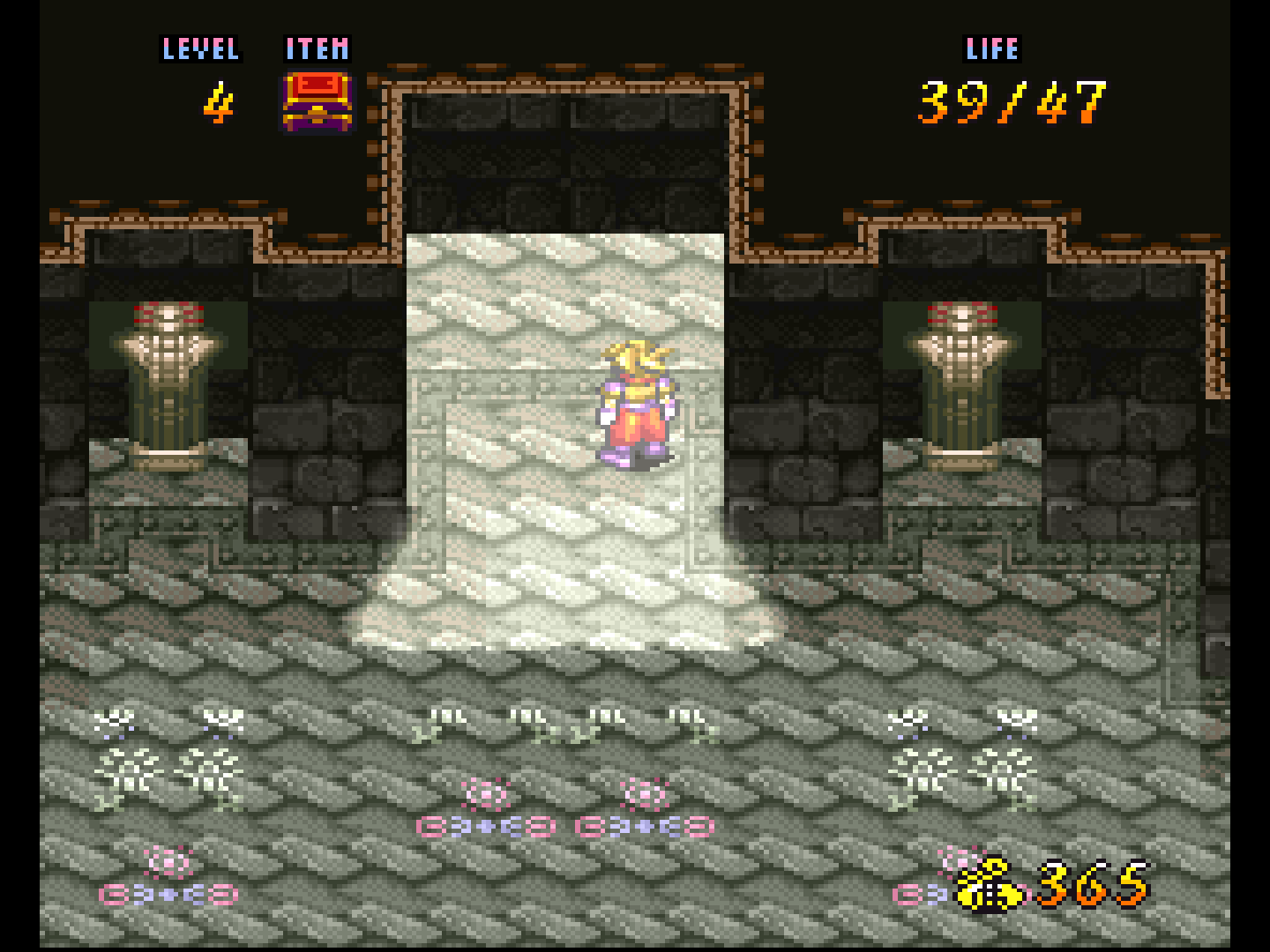 Now to revive another continent!

In the next room, we meet another mage, and proceed to quickly take care of them. 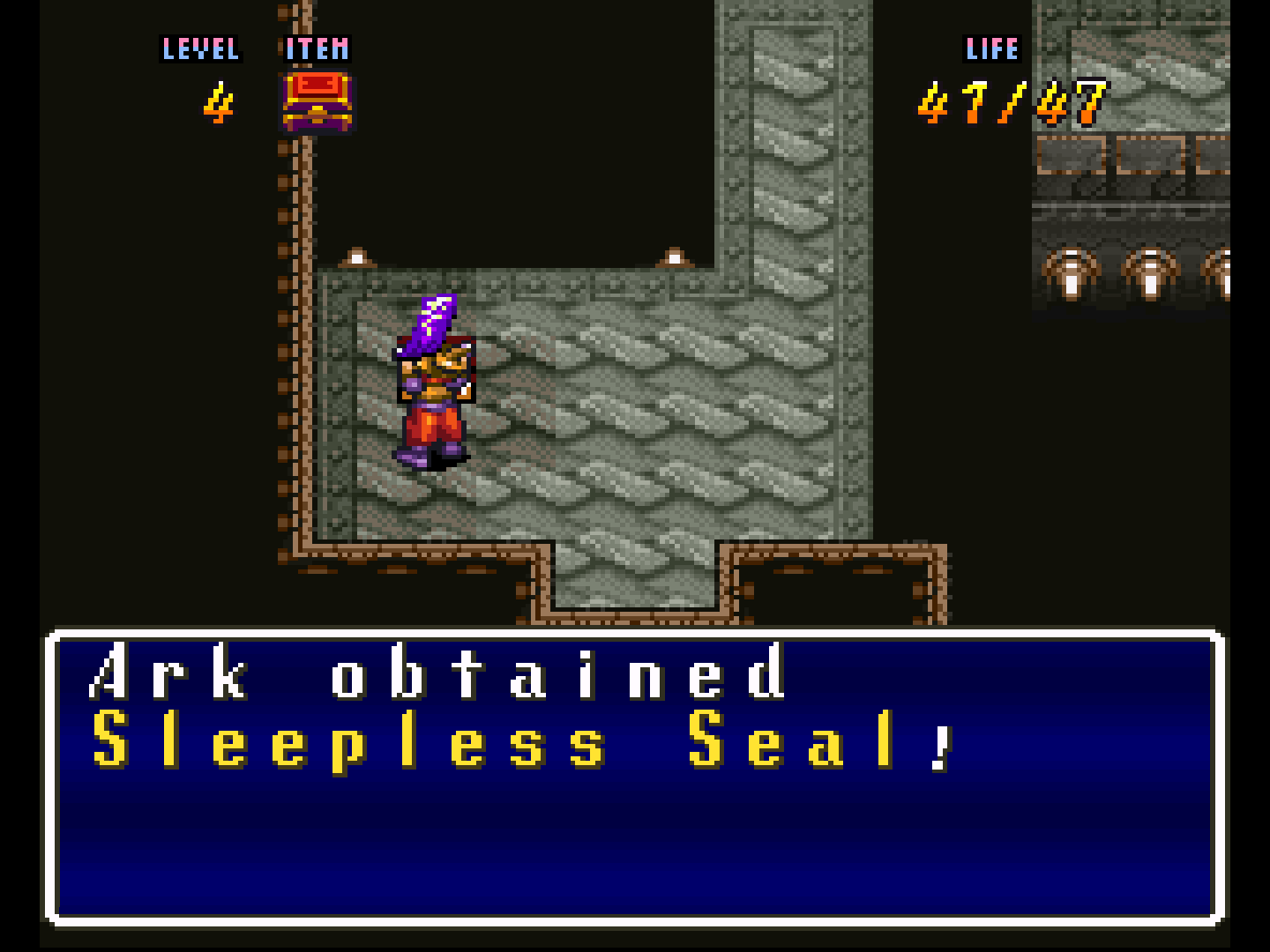 I wonder if this Sleepless Seal will help? By the jingle that plays after we get the item, it probably will.

According to the description, it will block Guardner's spell, but can it block other sleep spells?

I equip it, and proceed.

In the eastern end of the room, I get another Magirock.

After clearing the room of enemies, I press the two buttons here to open the door forward. 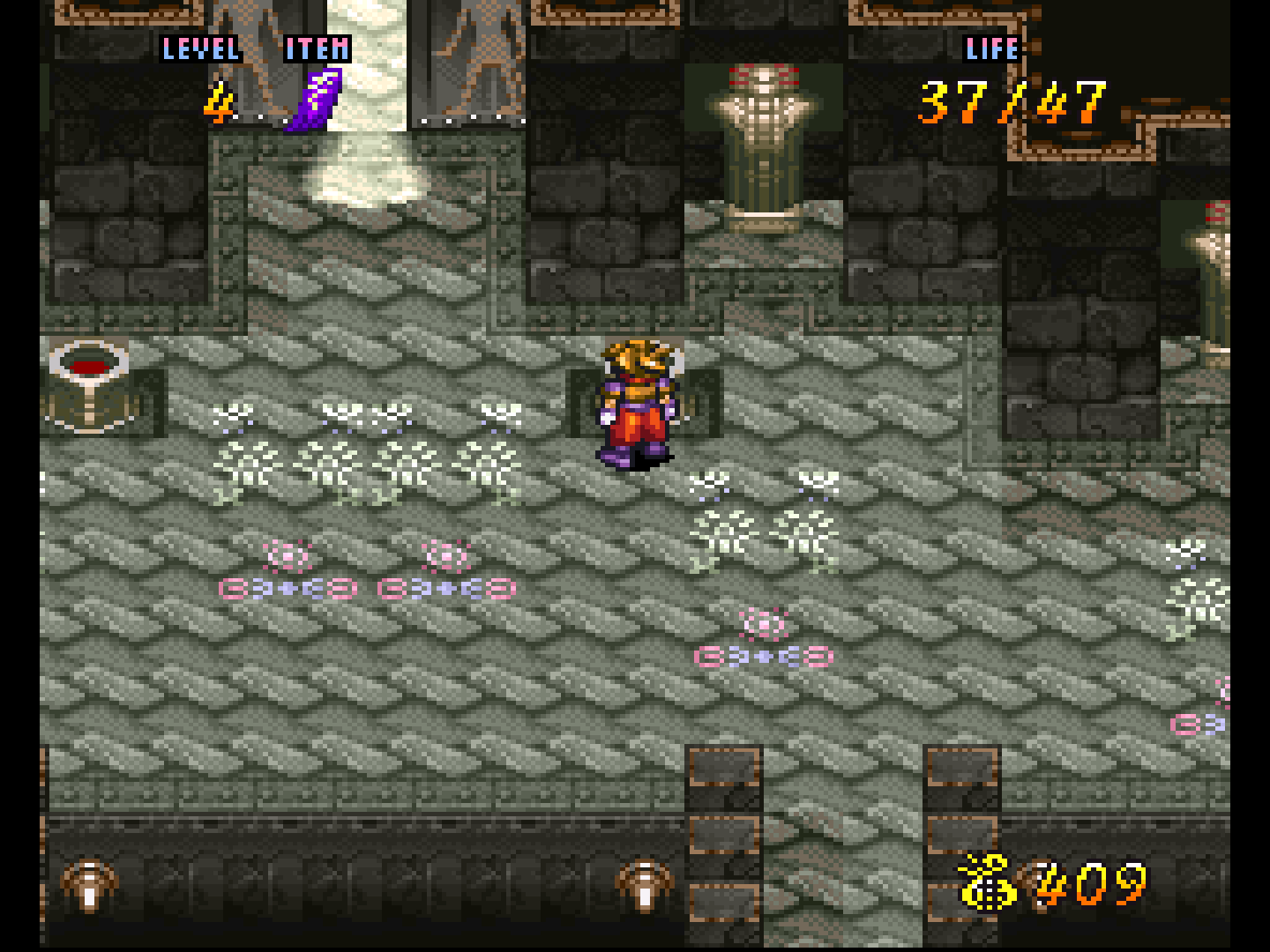 I manage to flee into the next room before the prompt prints out that "a swarm of Huballs" approach.