By the fog in the sky, things are not looking good. 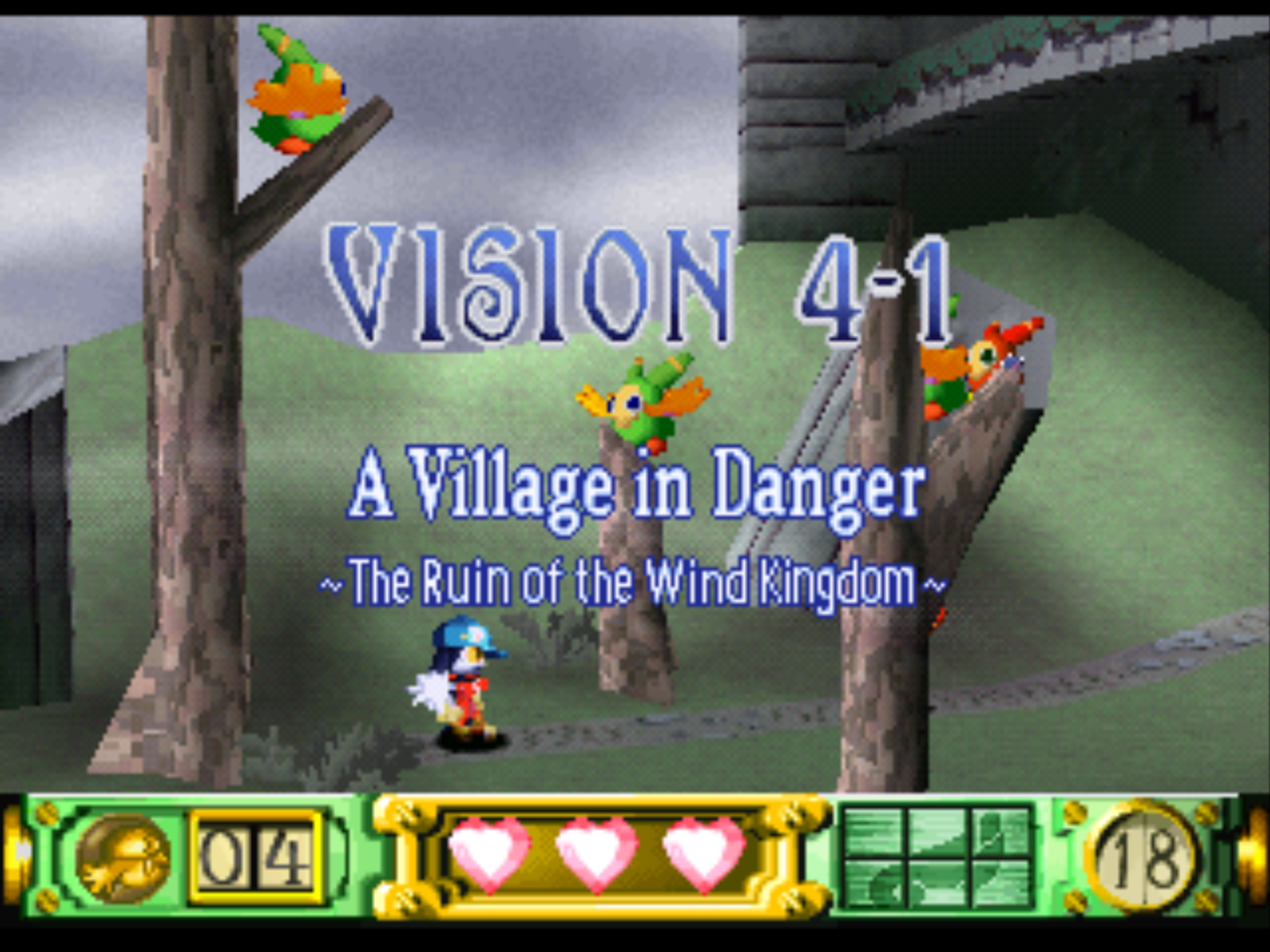 All the Moos flee save for the non-flying ones...

We take one and hit a spiky monster from above, getting a blue stone.

Instead of going into the first tunnel, we take the upward route. From there, we get our first friend!

Unable to contain my curiosity, after peering into the second tunnel, we go back down to the first one, and see another dream sprite challenge.

Klonoa's getting hurt a lot here...

At the higher entrance into the ruins, a big spikey roller drops down! 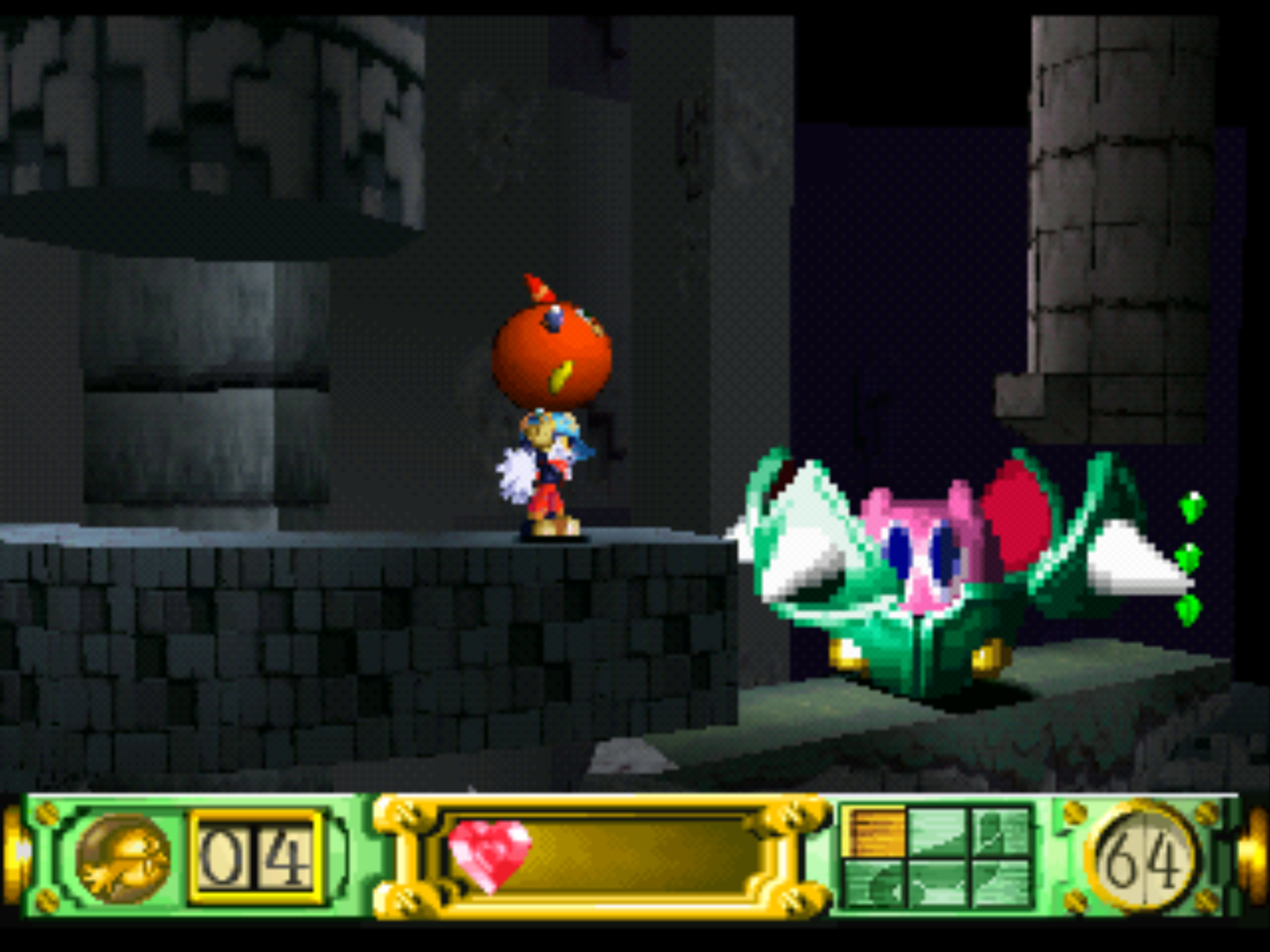 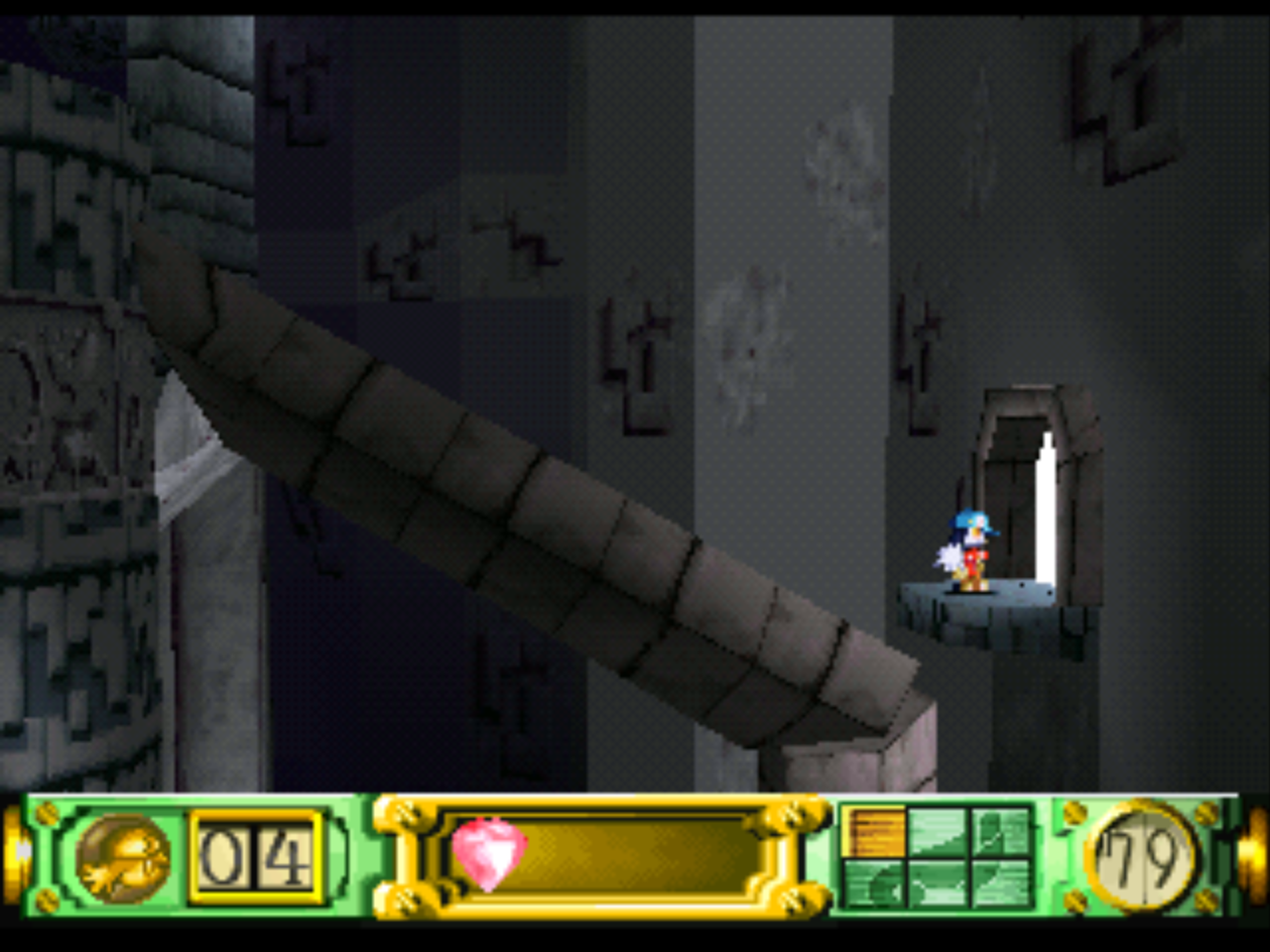 Outside, we're introduced to a spike ball double-cannon shooter (a Glibz), who shows us its face after shooting just to taunt us!

Crumbling platforms are also in the mix! The prize up top was worth it, though: another friend!

Westwards, we come across a dead end, and more of those shooting creatures. Another bubble containing a friend is also here!

Back and upwards, we come across another one of these murals... 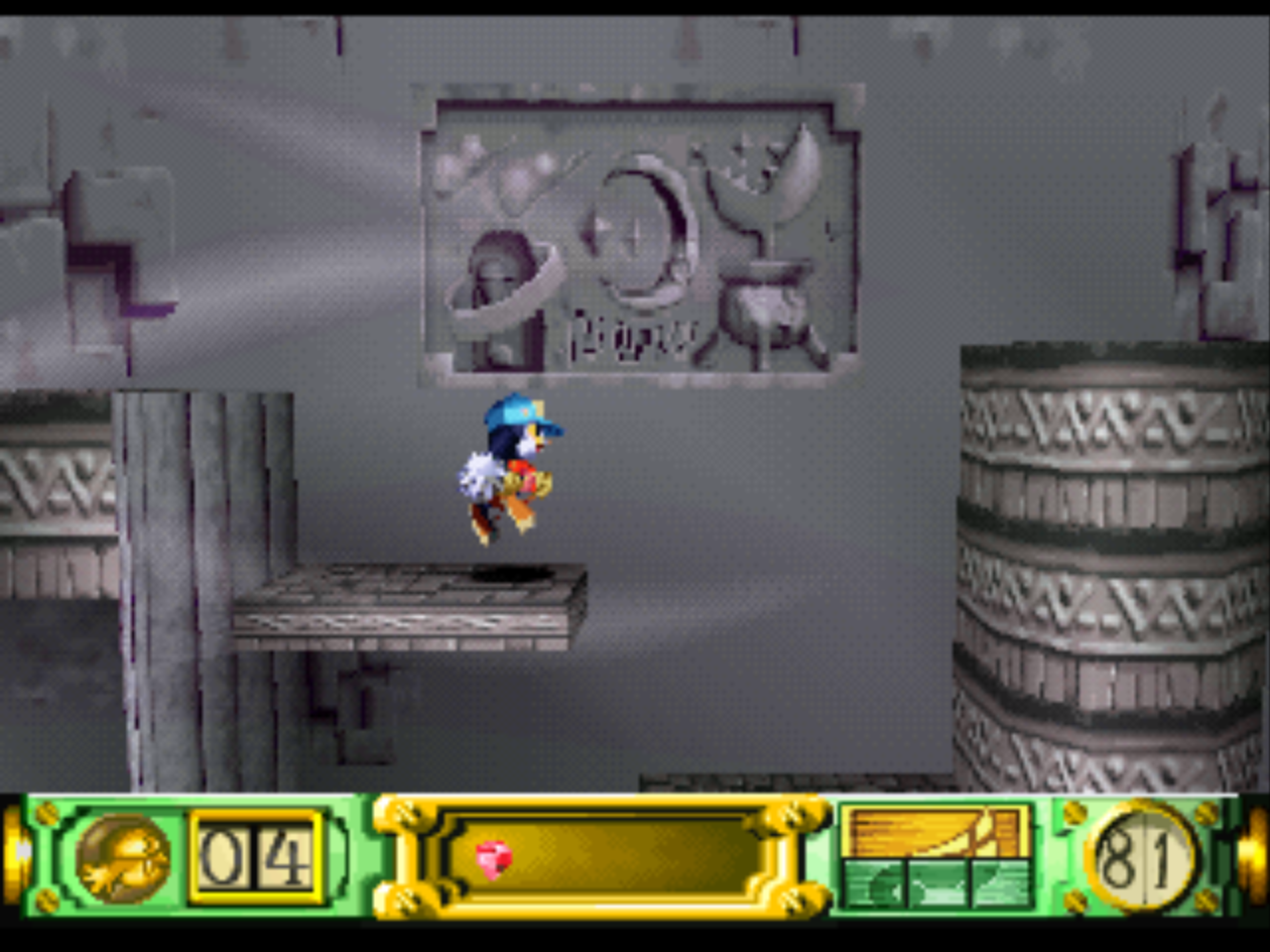 I wonder if they say something relevant to the story? Or if they're used to depict the opening of the Moon Kingdom?

It seems that we could've rescued the friend by throwing a Moo at the bubble here. 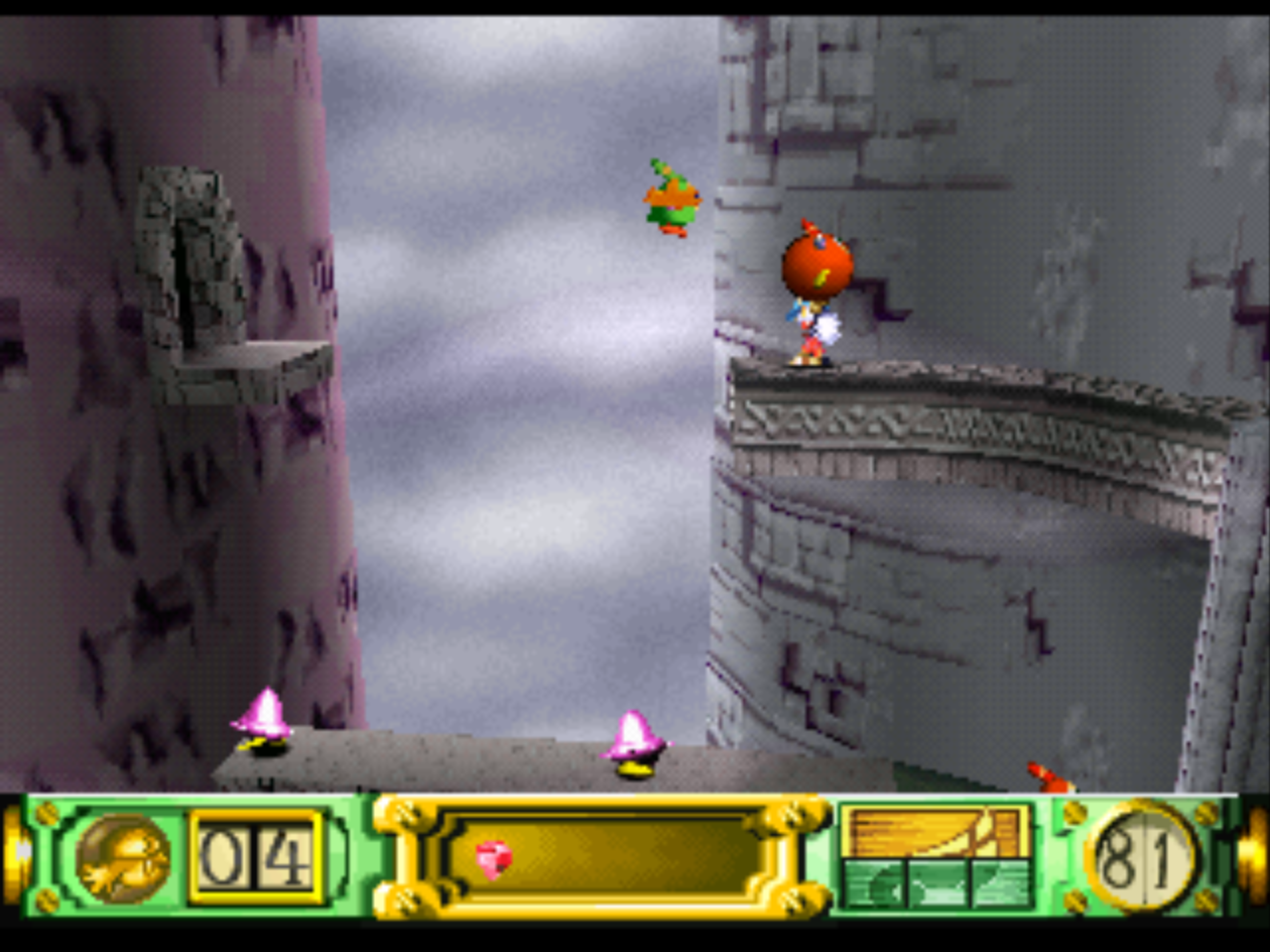 Ghosts and a flame orb-holding critter, a Burnie, make their debut! 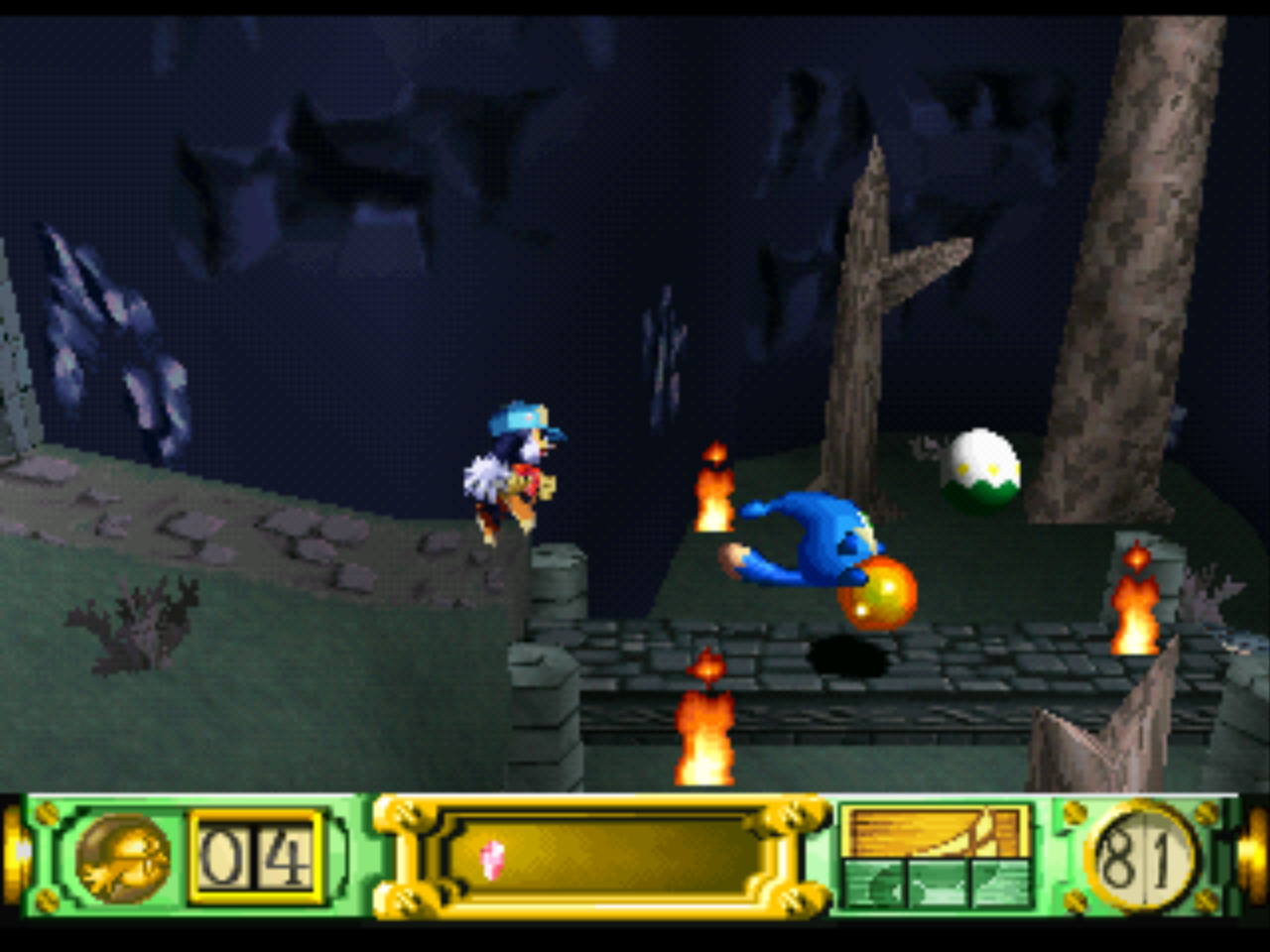 It seems the devs who made this section read my mind: the egg has an extra life in it.

As we go farther, we're entering the cavern portion of the ruin. The graveyard in the background though... 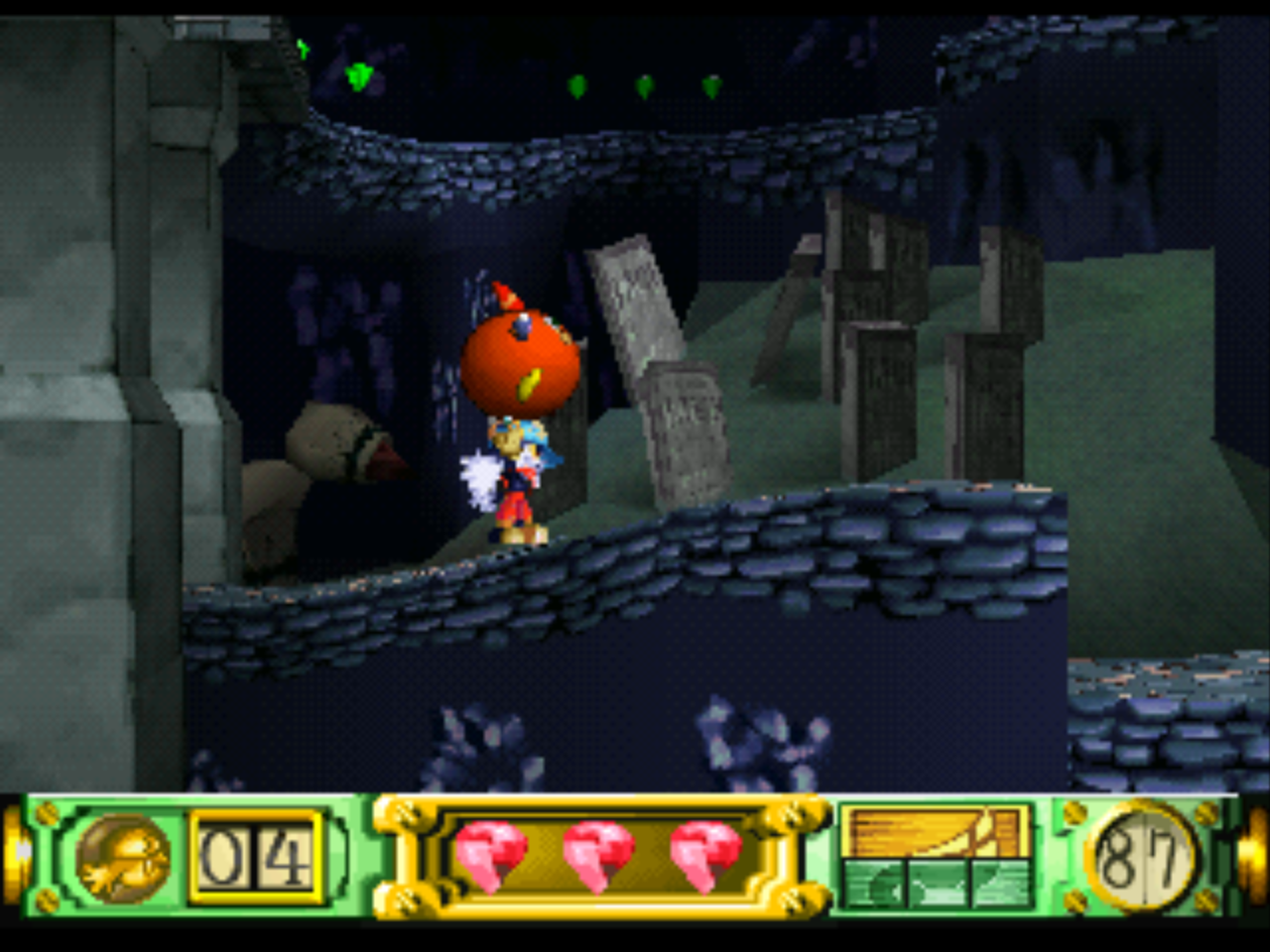 Further in, another Burnie! I try to use him as a boost jump to the higher parts of the cavern, but no good.

A nearby platform held on thin rope flips Klonoa over, and another life lost!

We manage to leap past another flimsy platform, and encounter the trickiest challenge so far in this level. 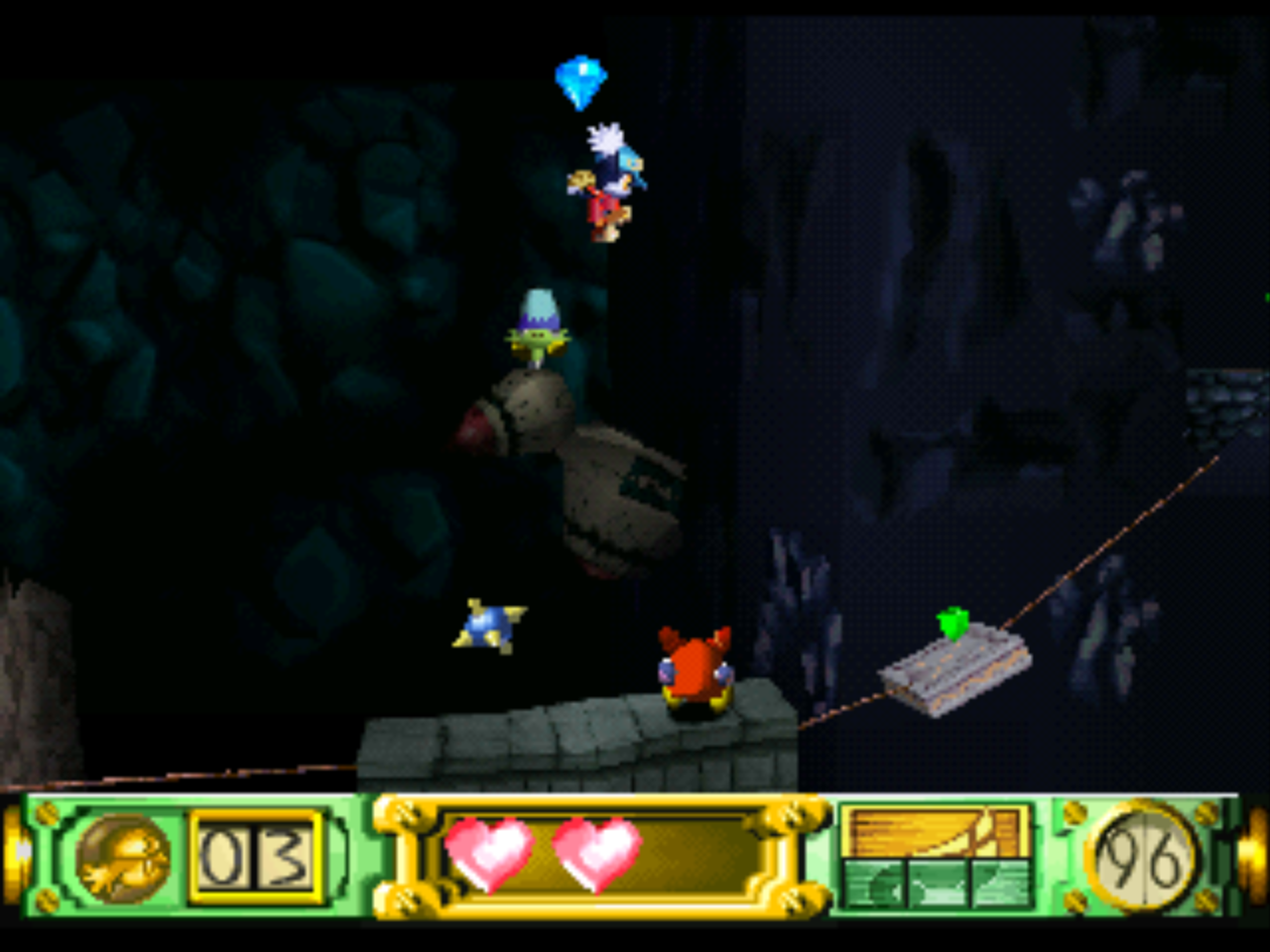 After that one, it's more precipice-crossing as we gain a much-needed extra life!

But the damage Klonoa accumulated from all the creatures earlier takes its toll, and we are sent back before the barely-supportive platform.

We make it after doing that tricky challenge thrice, and are back above the graveyard. 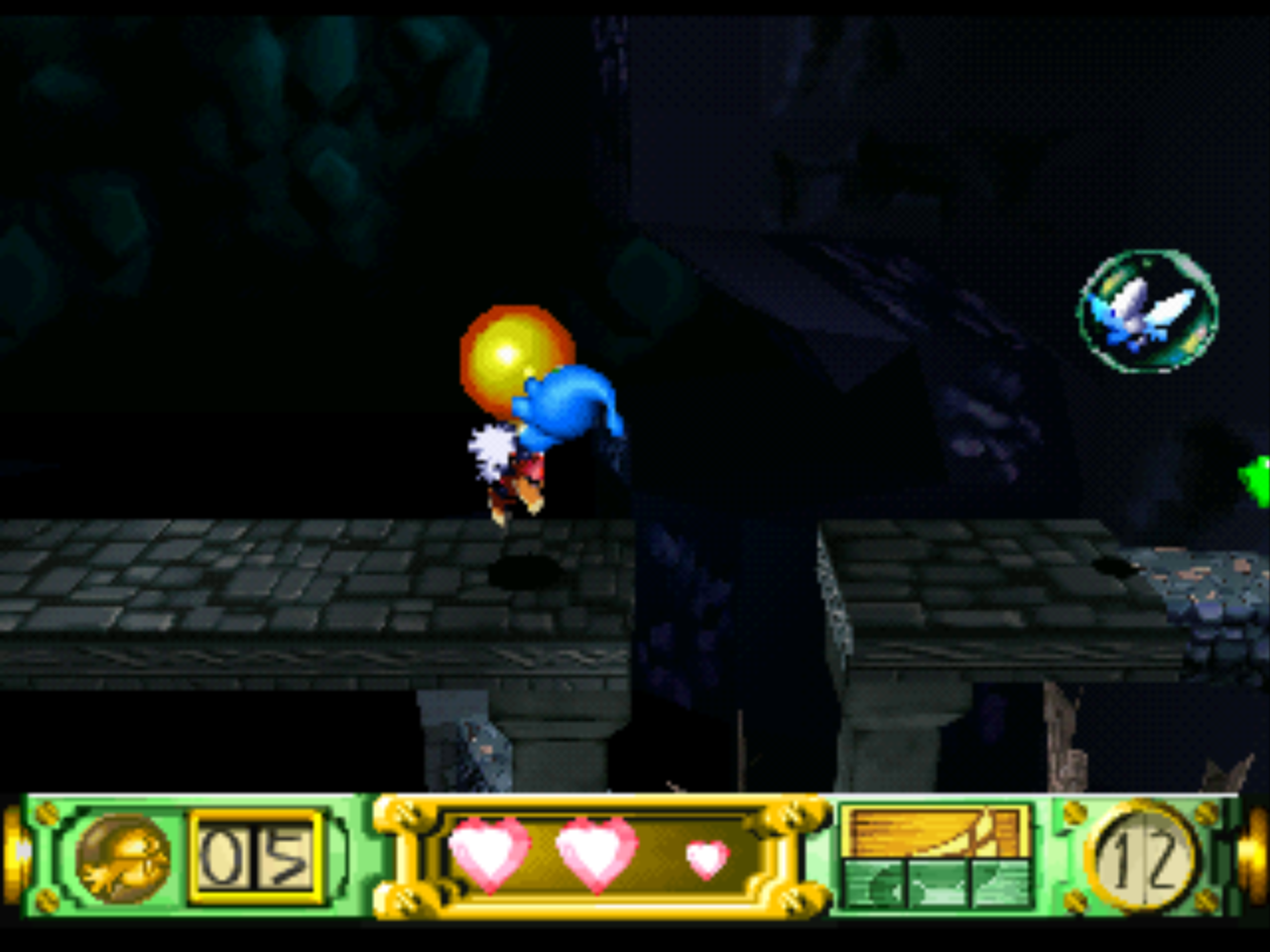 The spikey monster ahead past the dream sprite was what cost us two lives.

We make it past that obstacle, and run into three Ghosts, who surround Klonoa!

I am a bit nervous now. 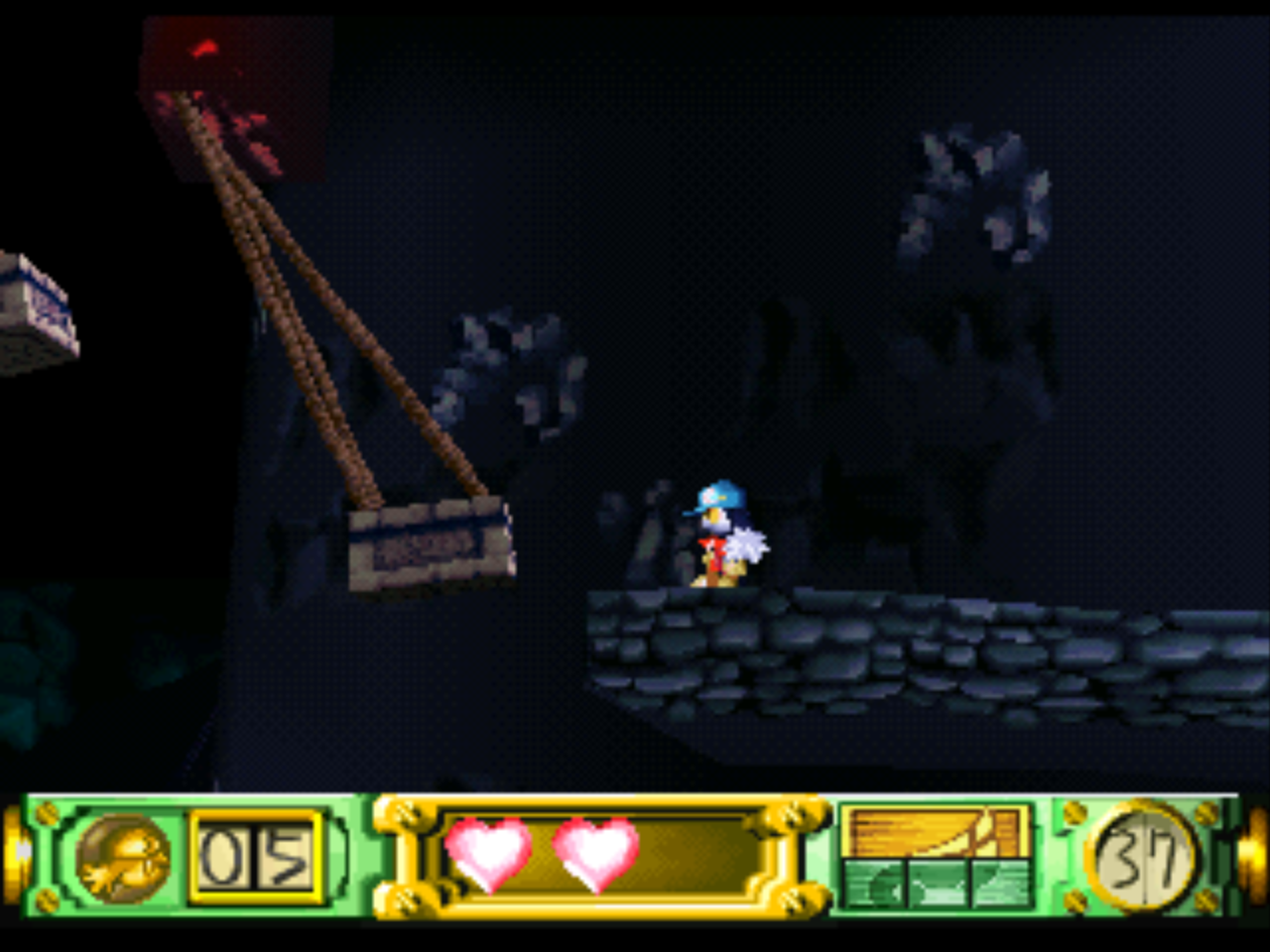 Seeing another friend, we end up falling trying to perform a failed rescue...

With careful timing and no floating jumps, we get friend number four!

We end up using a flying Moo, and get to a trove of dream stones!

We rescue the fifth friend, but at the cost of falling back down to the flimsy platform!

So much close calls in this level!

Good thing that there aren't creatures to block our way anymore!

As we head outside the tunnel, more ghosts appear...but that's not a problem. 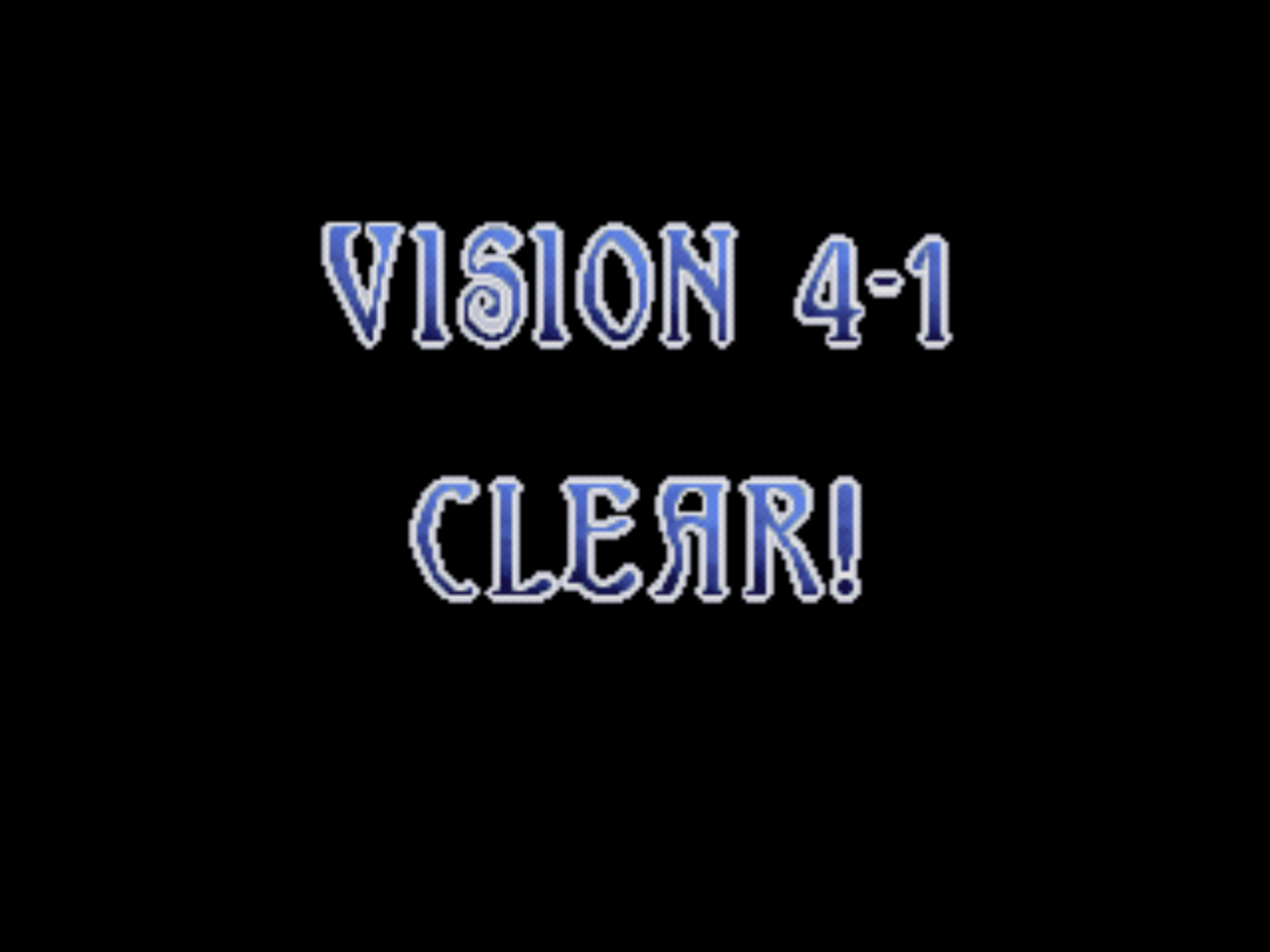 I got five friends in this level...who did I miss?

It seems I have to replay this once again. 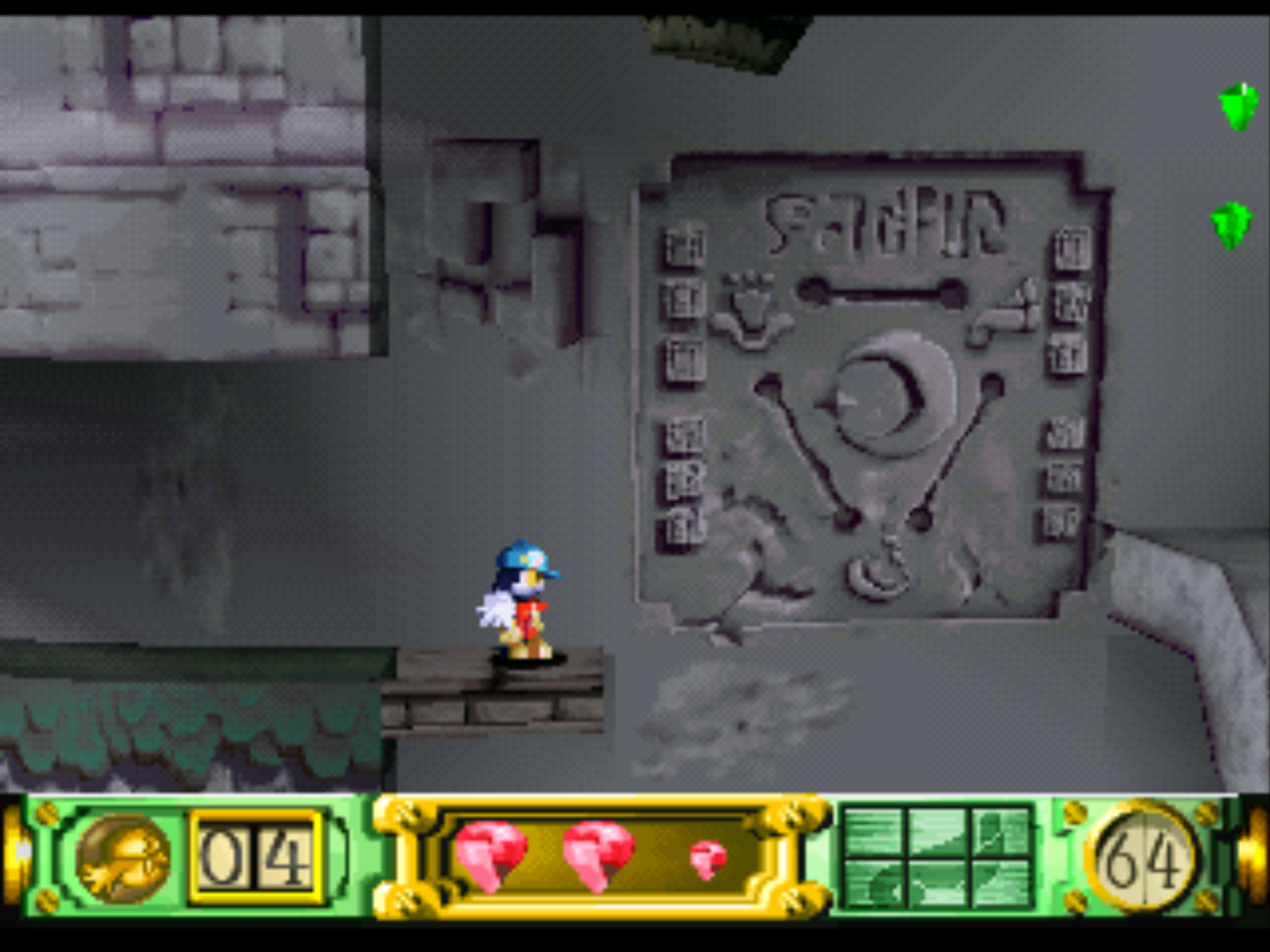 I forgot to bring up this mural too. It seems that the wind, water, and sun are surrounding the moon. Maybe these are the three gems that Granny mentioned that could open the way to the Moon Kingdom?

I did forget an area: the hole in the wall! 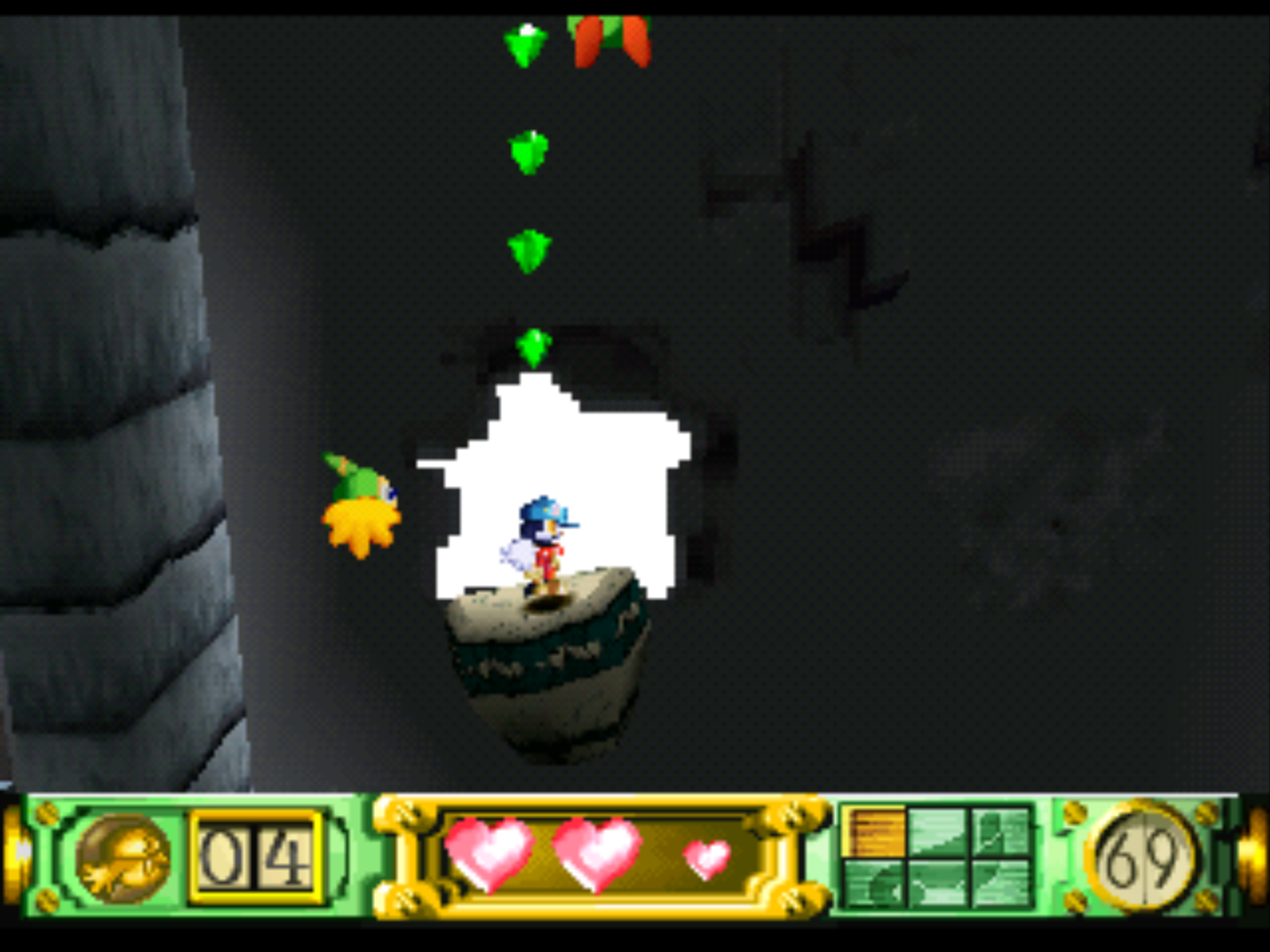 A high combo jump is what leads us to where our second friend is!

Save for the tricky challenge and getting the last two friends, it's all smooth sailing afterwards.

No lie, this is the level where the game is telling us that things are getting serious.