I'm now at Part 50 for this playthrough!

What the hey? The enemies have respawned!

I check the menu: I still have the necklace from last time.

I take care of the willowisps and archers again.

When I have Will jump off a ledge, I realize he doesn't take fall damage...is the wind guiding him to land safely?

In the next area now, inside the wall, where I'm greeted by two more archers.

After getting one, I jump down the ledge, knowing there's no way back now... 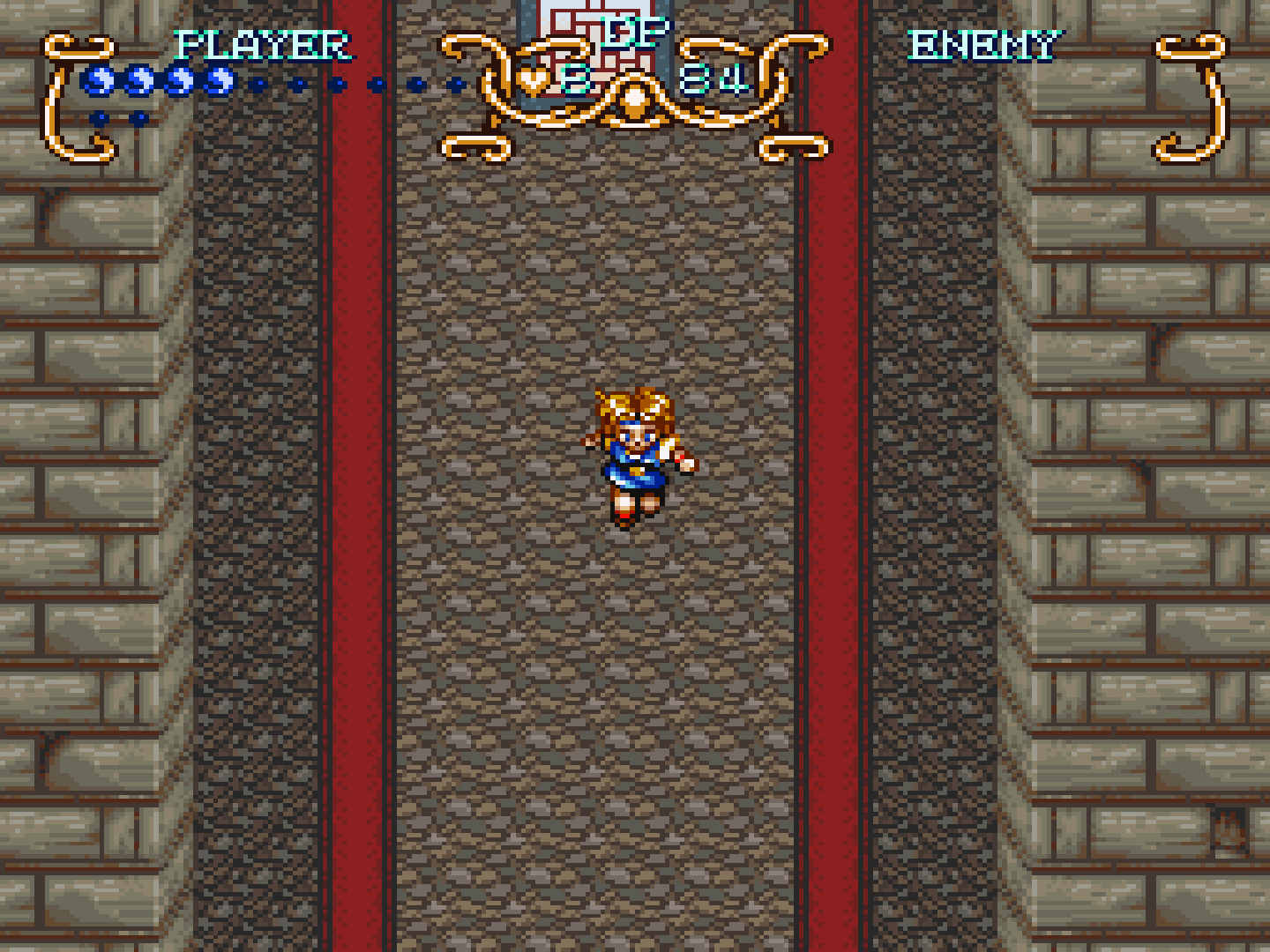 It's a super-long drop!

I make it down to a hall of terra cotta soldiers. 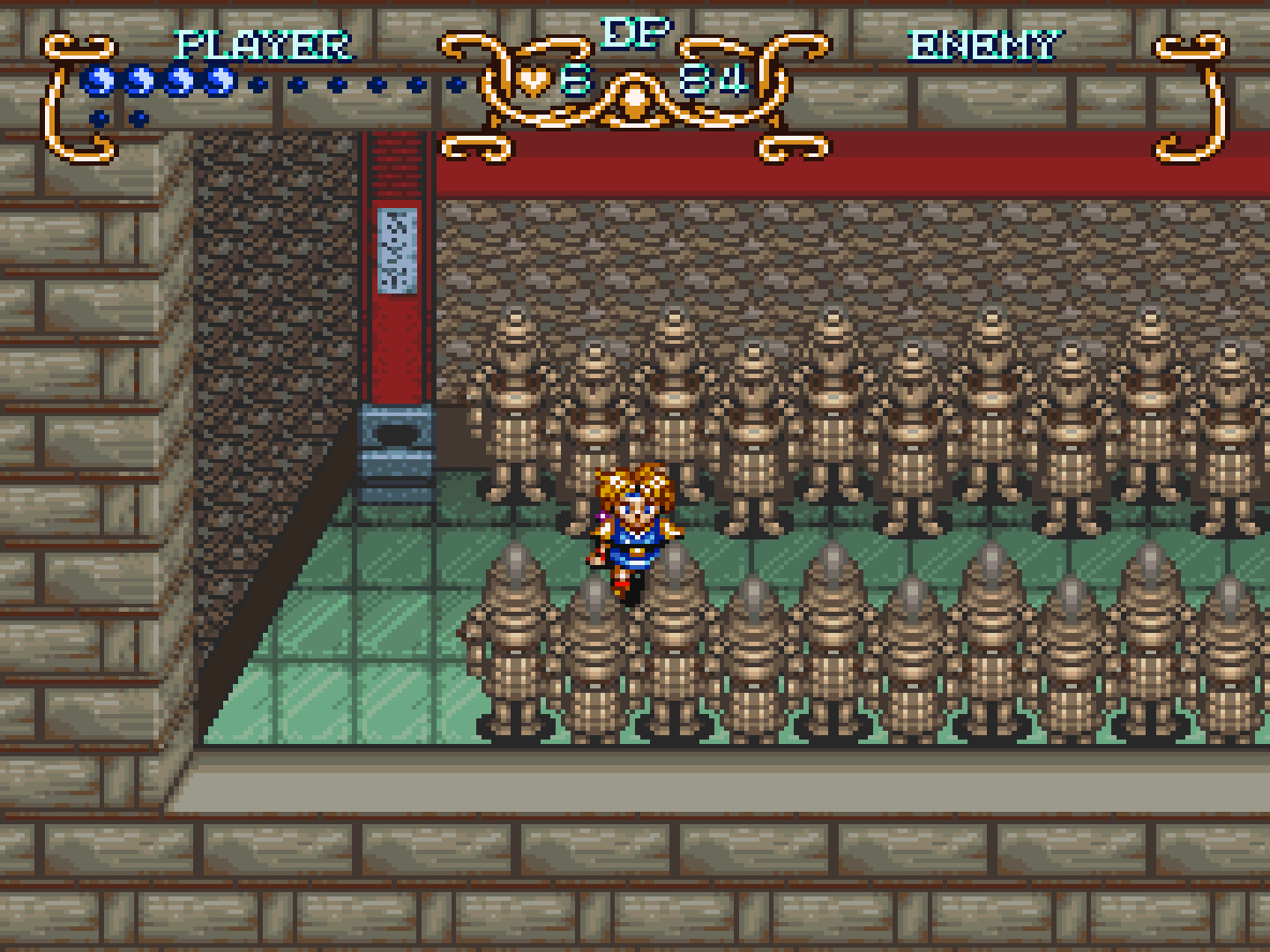 They make the place a bit unsettling.

At the end of the hall, one statue comes to life! 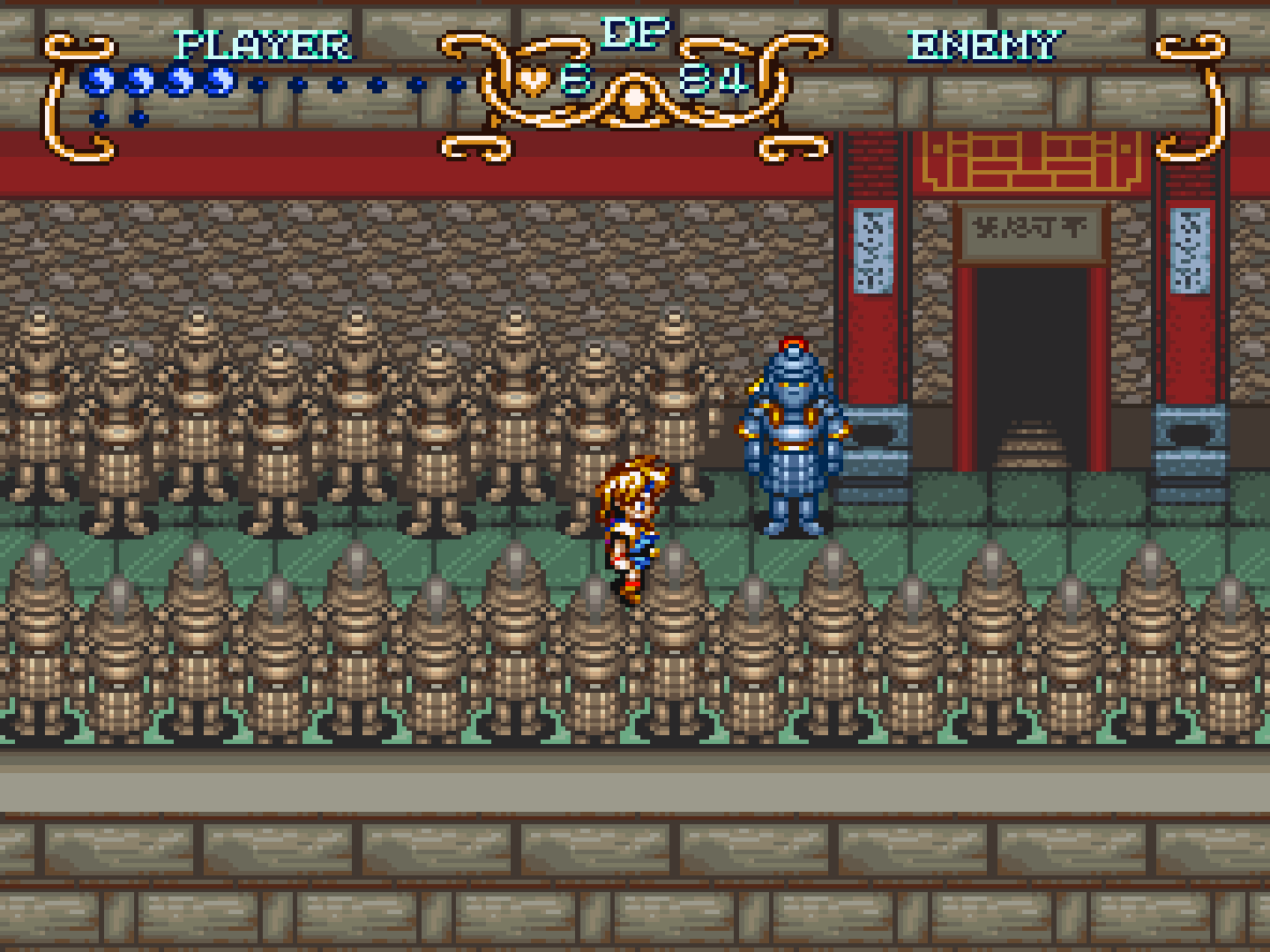 I head upstairs to a long hallway and face more archers and a willowisp.

I take the set of stairs to another hallway with two willowisps, where I recover some more health.

I go back down and into the west set of stairs, where I find a Red Jewel in a chest!

That's around 17 Red Jewels I've picked up so far, iirc.

Back to the second hallway and up more stairs! 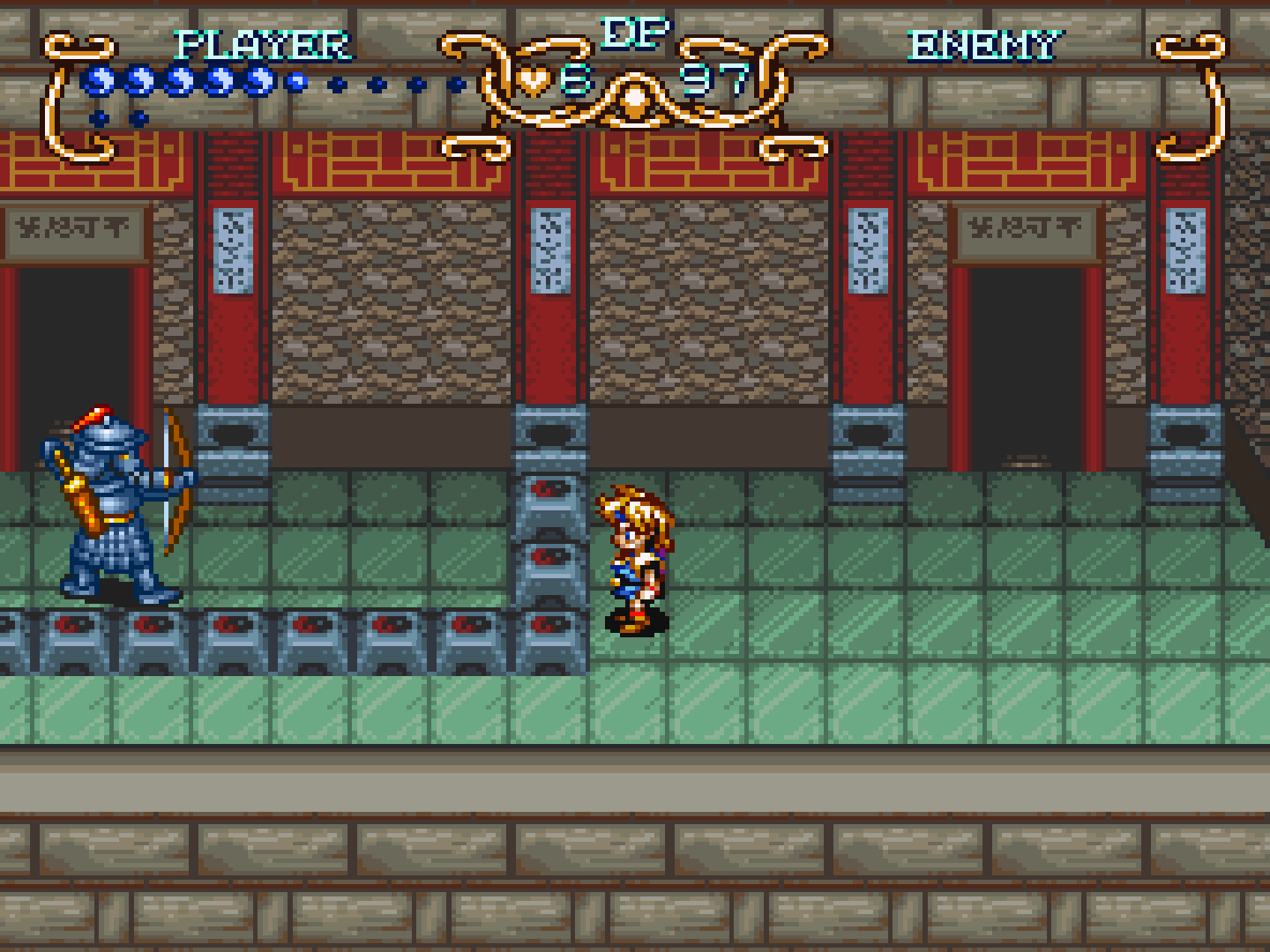 As soon as I enter, an archer fires! Lucky I was prepared for that!

Oh great, there's snakes in this level too?! I'm not prepared for snakes...

I have Will attack before the snake pounces.

There's also spear traps in this room too!

After clearing the room, I go upstairs and find more snakes!

Going back up the wall... 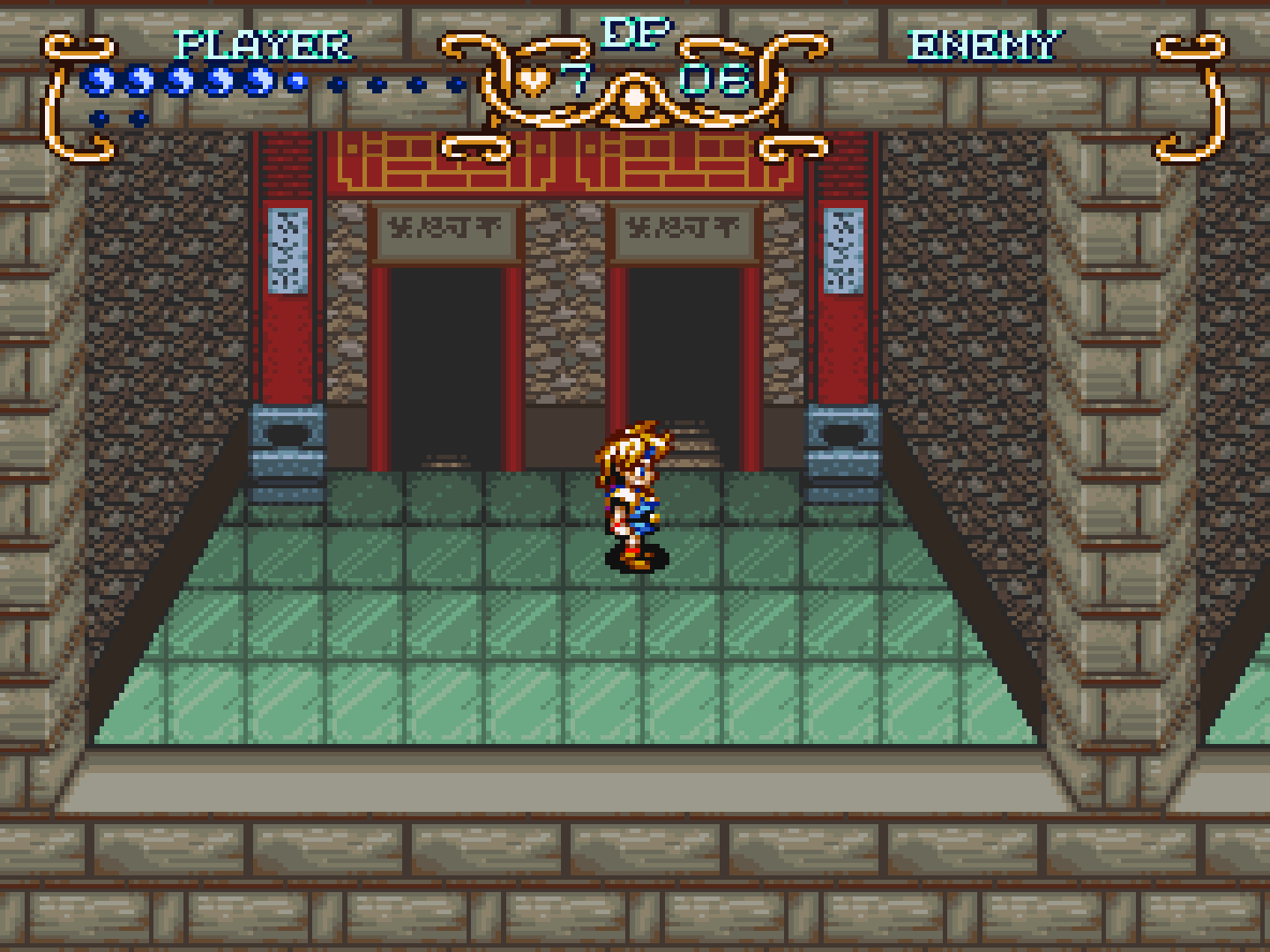 I'm now at a hall of many rooms...which one is going to take us back up?

But I stop worrying about that for now, as there are more enemies on the prowl! 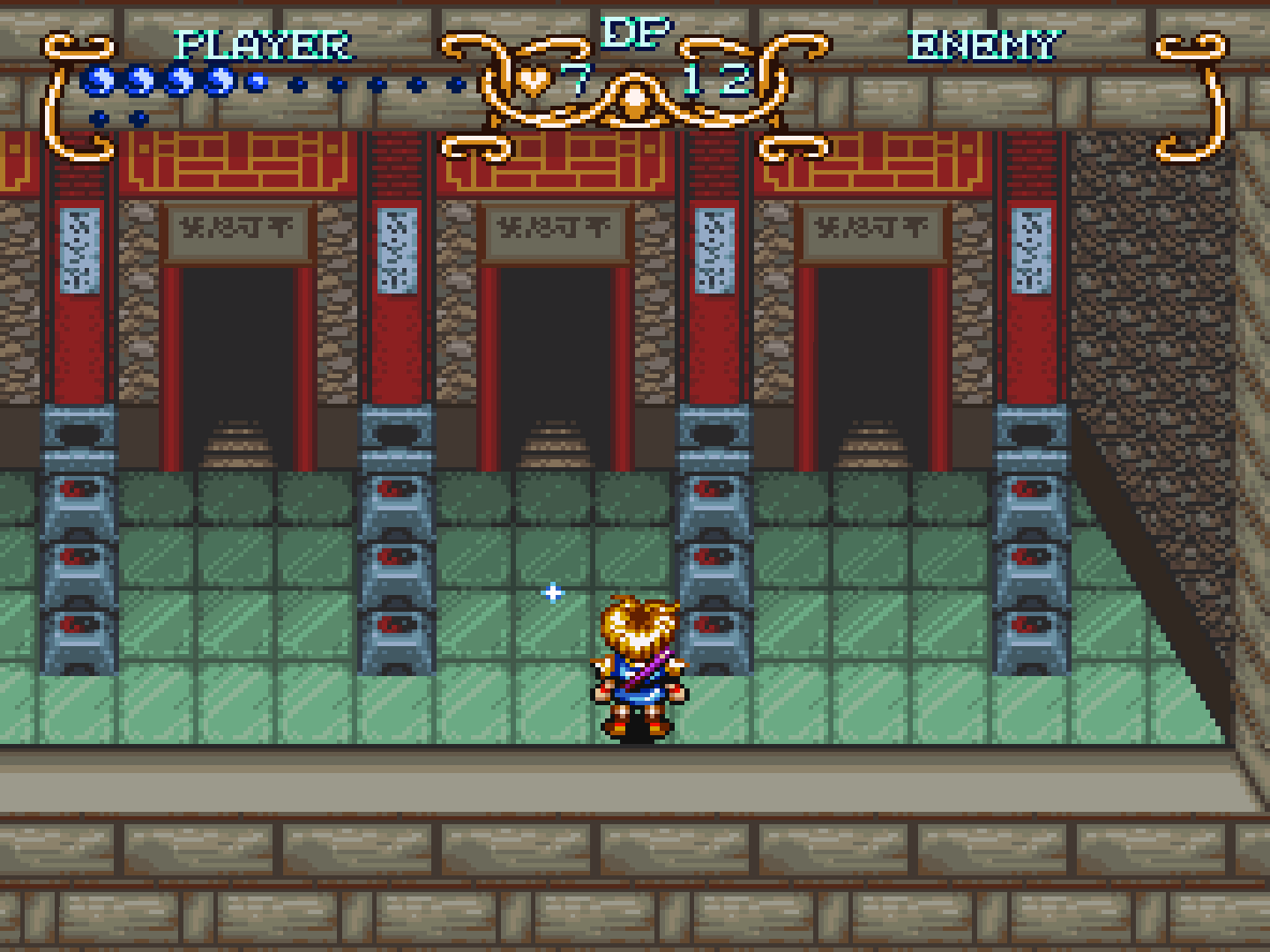 I notice another sparkle on the ground...

It's another part of the necklace. Is Lilly using the stones from the necklace as some sort of bread crumb trail?

Theres a total of five rooms going up...

I decide to check the first staircase from the left, leading to a dead end with two archers.

I go to the staircase at the place where we found the necklace.

There's a button to lower the pillars here.

Or not! Instead, it opens a path from the first staircase!

We make it back to the wall proper!

I take care of the last archer and willowisp and win more health! We now have 25 HP! 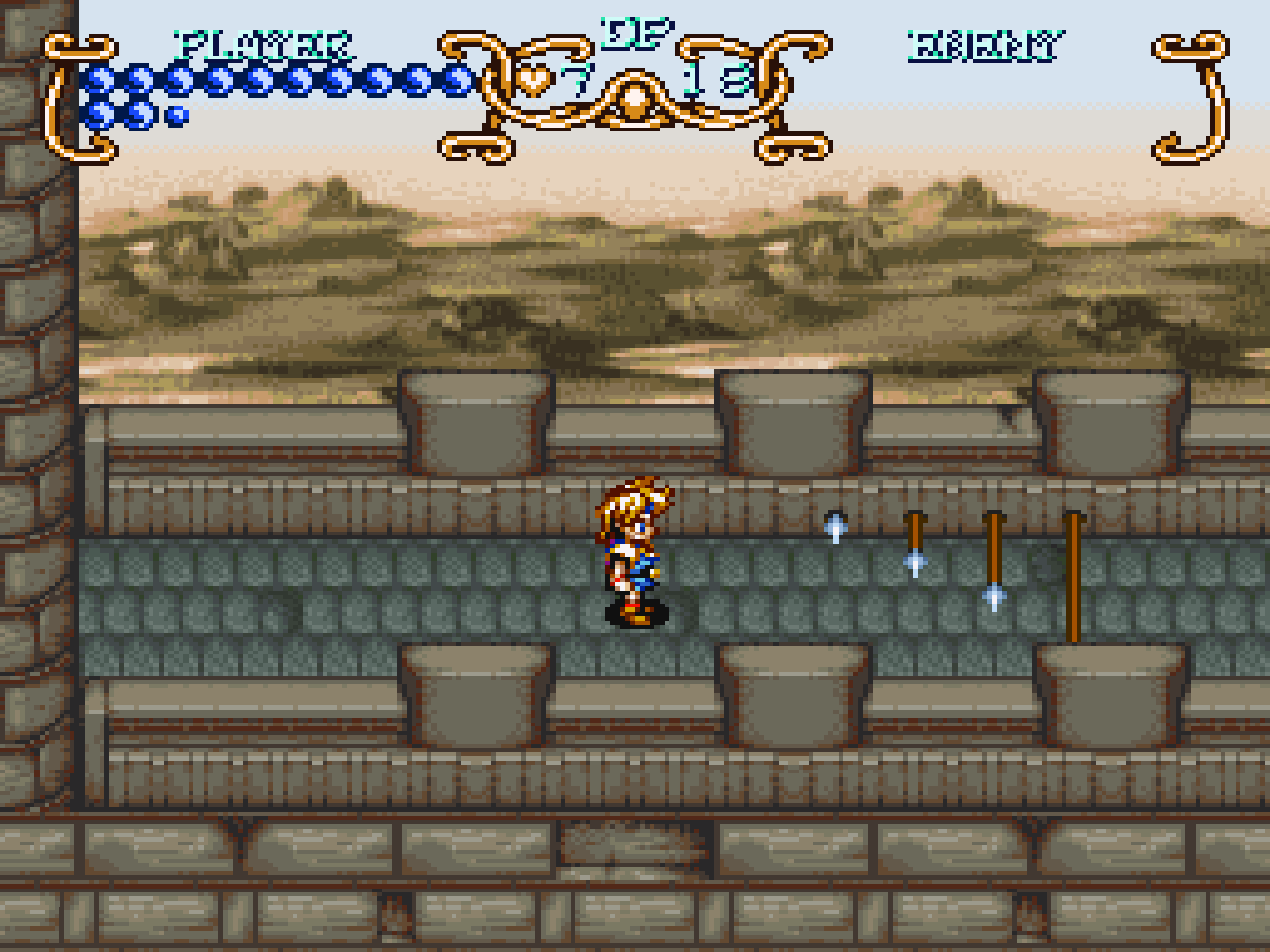 It seems we have to dash past this one!

We now make it to the third area, but... 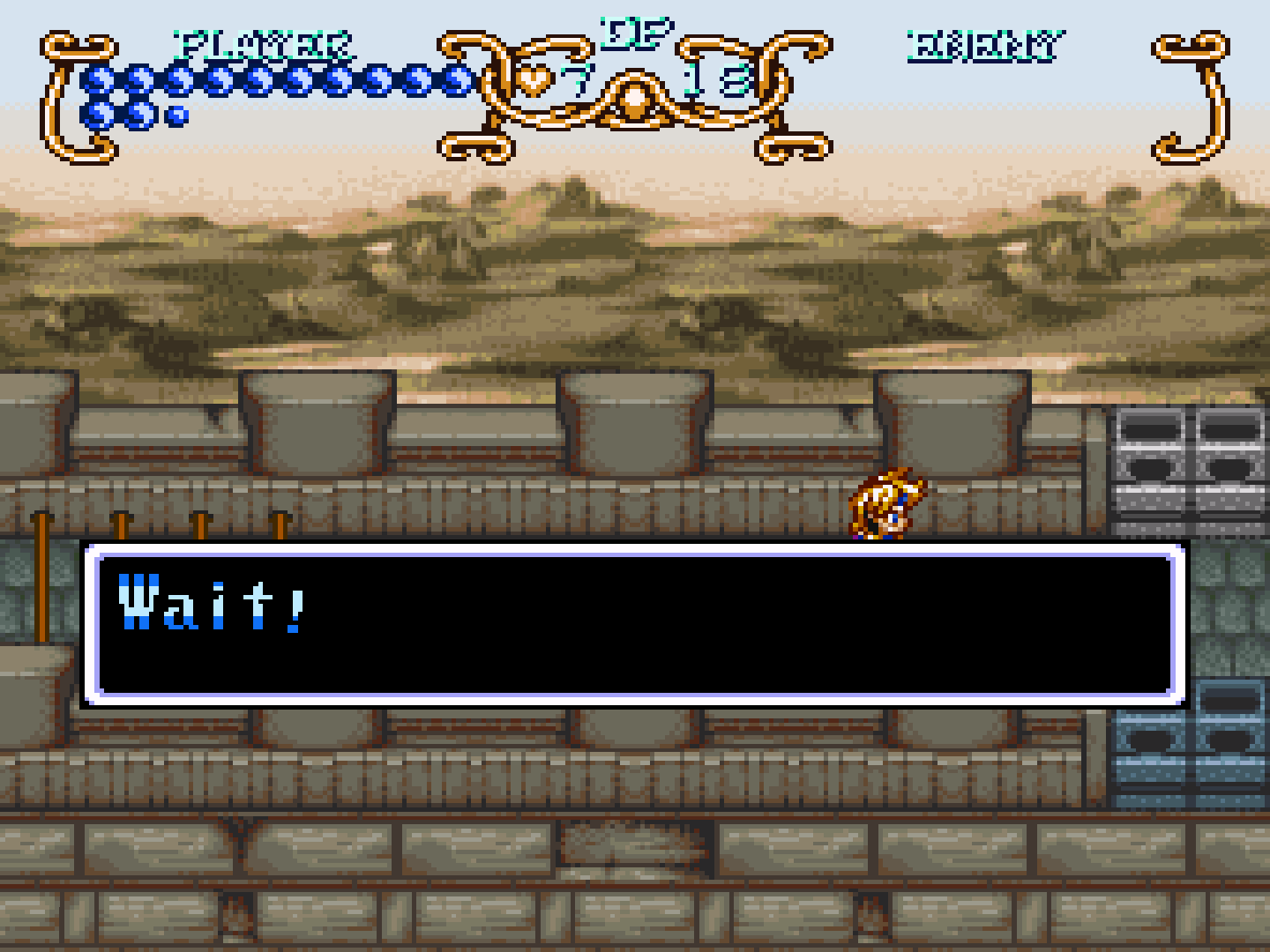 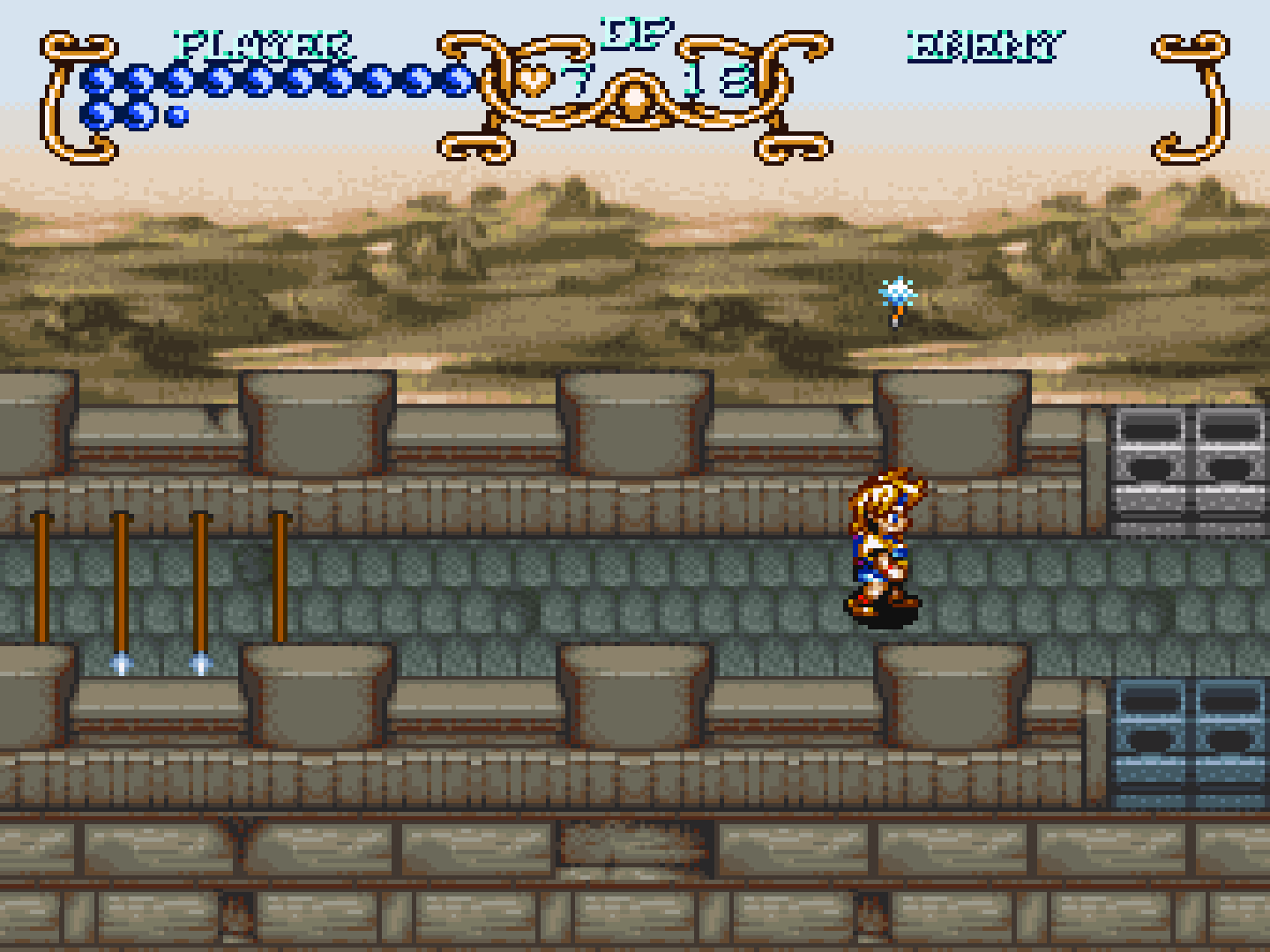 Lilly: "Are you looking for Lance? I'll go with you!"

She goes into Will's pocket.

Lilly: "Ha ha. It's been a long time since I borrowed Will's pocket." Since the trip back at Mu...

We're now in a higher part of the wall... 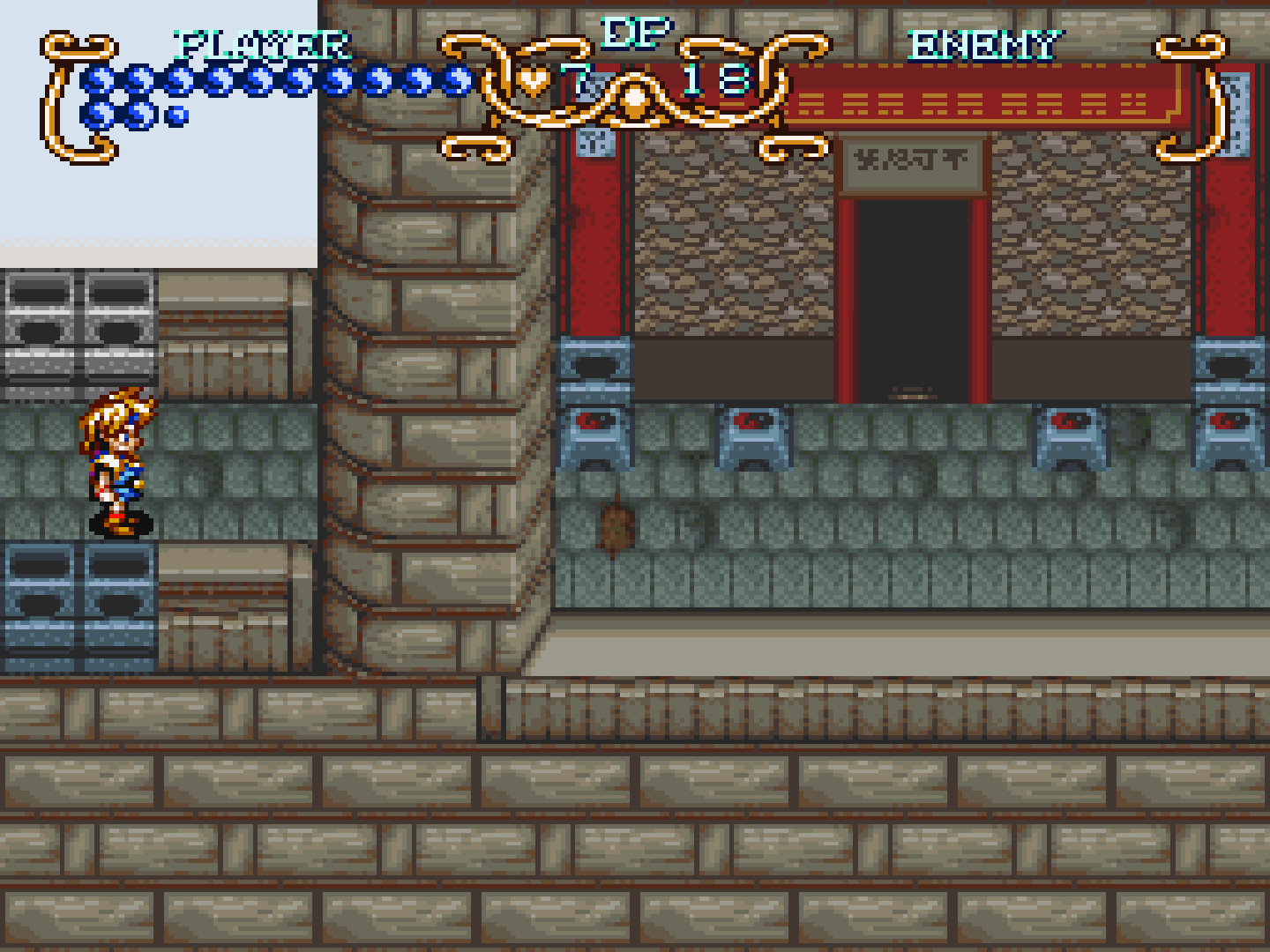 I go downstairs and pick up an herb!

After taking care of an archer and snake, I go back up...

It seems we need Freedan for this room. 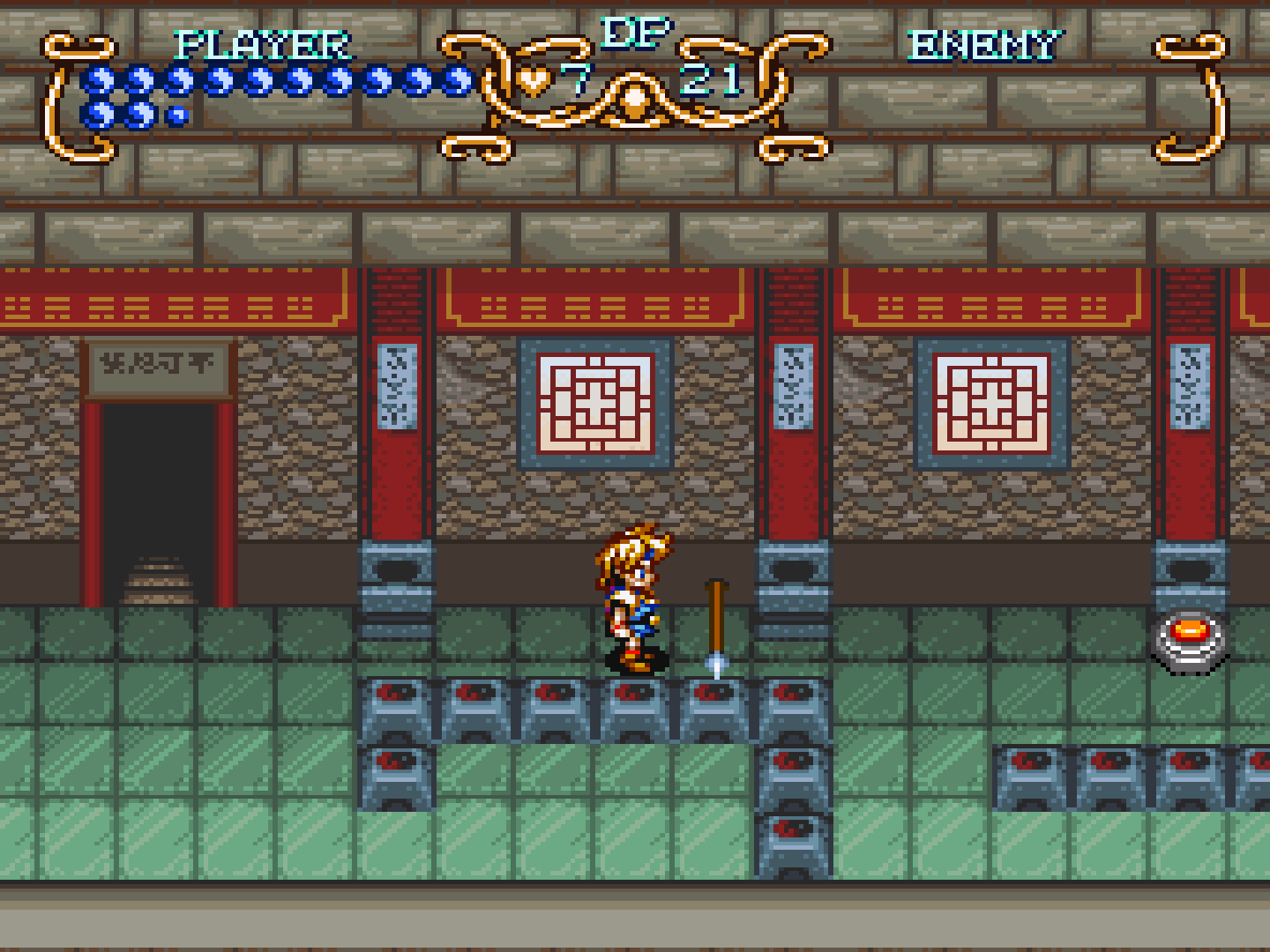 I make a quick save, knowing that I'm running out of power to write notes.